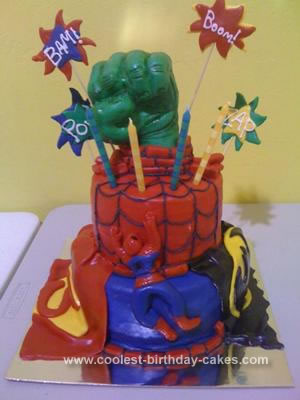 I used boxed cake mix (DH-yellow cake with a touch of my own real vanilla) and store bought vanilla butter cream to “dirty ice” the cake layers. BTW–It tasted just like Twinkies!

Then made MMF to cover each layer in primary color: the bottom layer is half blue and half yellow, the top is all red.

(MMF=marshmallow fondant…really easy to make, {grease/crisco EVERYTHING, bowl, spatula, hands, surface}, 1 bag of mini marshmallows melted in microwave with a tsp of water. Once melty pour onto powdered sugar volcano on greased counter top and knead, knead, knead. It is messy at first but there are plenty of videos out there to see how to do it and everyone seems to have their own flair to it. I add gel coloring to the melted marshmallow to save me some kneading time.)

I used a brick textured plastic thing from craft store (by Duff) to press into the red MMF to make it look like a brick pattern. Cornstarch is your friend…keeps stuff from sticking and goes away with water. Also had kids help me make tiny red bricks with left overs to make effect of Hulk fist busting through brick wall.

Rolled out red and black MMF for capes. Used a pizza cutter and Xacto knife to cut out Superman emblem and Bat sign and to make the bottom of Bat cape look like bat wings.

Then pressed 3 dowel rods down into bottom cake with about an inch sticking out of the top of the cake. Then plopped the top tier on. Next I pressed a long dowel rod through the middle of both cakes.

I draped the capes on the sides of the cake.

I used a Spiderman happy meal toy as an example to sculpt a MMF spidy. I used some edible black ink pen to draw the eyes and spider on his back. I used a clay tool thingy to press in the web pattern on the red parts of spidy. His legs were made first and then the red boots. It sticks together well and you can paint a bit of water on each end of you need extra stickiness. Then his torso and arms were made with the red. His head was made last. Then I added a bit of blue to his back to make a “shirt”.

I set him aside to harden-up.

The Hulk fist was FUN! I used “Rice Crispy treats” to roughly create a fist form by looking at my fist as an example on where things lay (and just make it bigger..lol!) Then “dirty iced” it with the same vanilla butter cream so the green MMF would stick better. I shoved two bamboo kebab sticks, coated in a light amount of butter cream “glue”, into the wrist area up into the palm so I would have something to stab it down with into the cake. I covered it with one piece of MMF (twice…the first one ripped and just didn’t look right). Then used that same tool from spidy and tucked, pressed, creased, made finger nails, knuckles…to make it look more like a big ole scary fist. For added detail I diluted some green gel dyes with vodka and “antiqued” the fist.

The cartoon exclamations were cut out of MMF with star and sun cookie cutters. Then layered on top of each other with a little paint of water in between to make them stick better. They were thick enough to be able to shove the bamboo stick in it…and set aside to dry. Once hard I piped on the words with butter cream icing.

To assemble the rest of it I plunged the fist down into the top layer. Then added the bricks and mortar around the fist and between the layers of cake as a border. Then I used water to moisten spidy’s belly side and stuck him on the side of the cake…I had to rearrange him a bit to make it less awkward looking…but it works. Then piped on the web with the same mortar colored icing.

To get the finished shiny look I just used vodka and a paint brush to “erase” any mistakes or cornstarch residue. It really cleans it up, just go from lightest color to darkest color so they colors don’t bleed onto each other.

It was a HUGE HIT! The my nephew LOVED it and so did the friends and family that came to his party. I would do it again for sure. I would just start on the accessories first so they were more hard when I needed to place them on the cake.

On the back side there is a number 4 in red which contrasts nicely with the yellow side of the fondant.

It was so much fun and the birthday boy loved it! 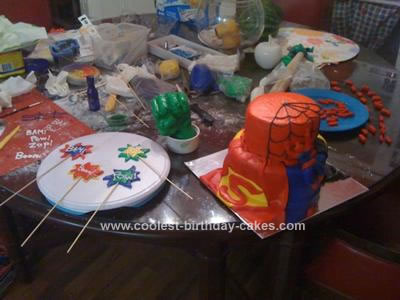 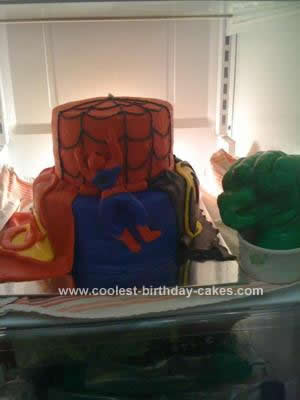