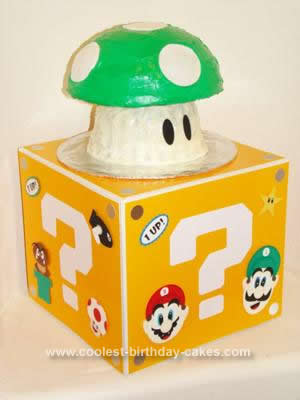 I made this Super Mario 1 Up Mushroom Cake from Super Mario for my son’s birthday. We chose the green 1 up mushroom because when Mario lands on it, it gives him an ‘extra life’ and a message that says ‘1 up’ I am a scrapbooker, and made the ‘Mystery Box’ cake stand out of a 12x12x12 box, cardstock, and paper punches for the characters. My son is now using the box to store his games in.

The cake was made with the Wilton cupcake pan. I used the cupcake base only (not the cupcake top), and turned it upside down on the plate prior to frosting. The top of the mushroom was made using the Wilton dome shaped Soccor pan. I wanted to do the entire cake in fondant, but my kids do not care for the taste, so I just cut the eyes and white mushroom spots in fondant, and frosted the rest in buttercream.