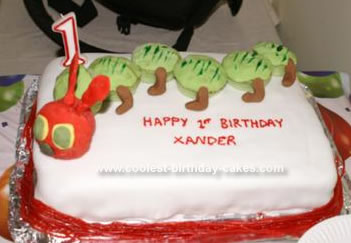 I made this Very Hungry Caterpillar Cake for my son’s 1st birthday because he loves the books and can recognize the caterpillar.

I made a large sheet cake (13x9in) of Yellow Cake from scratch – the recipe can be found here www.mumsnet.com/Recipes/call=RecipePage&pid=2828 (yellow cake freezes really well, so can be made in advance. It also seems to be much more moist after freezing.)

I cut the cake in half and spread strawberry jam on one half and butter cream on the other, then sandwiched the cake back together. I didn’t have a cake board so I placed the cake on top of a baking sheet covered in silver foil.

I spread some cooled boiled jam on the outside of the cake then rolled out my fondant icing – approx 800g (I used some ready-to-roll white fondant icing from the local supermarket). A good tip is to roll the icing out on top of some cling-film so it is easy to pick up and doesn’t stick to the work surface. I then placed the icing over the cake, smoothed down the edges and cut away any excess.

I made another half batch of the yellow cake mixture. I separated the mixture into two bowls, then used food colouring to dye some of the mixture green and some of the mixture red. I filled 6 cup cake cases with the green mixture and 1 muffin case with the red mixture, and then cooked these cakes until done.

For the icing I used ready made coloured icing, mixing colours together to achieve different shades. I applied cool boiled jam to the surface of each cake before putting the icing on top, to help it stick.

For the caterpillar antennae I molded some icing around two cocktail sticks and pushed these into the head. (I also had to mount the head on a cocktail stick to keep it from rolling off the cake). For the legs, I shaped some icing and stuck them on to the cakes.

To finish the caterpillar I used a green icing pen to brush some darker strokes on to the icing on each of the green body cakes.

I used an icing pen to write the birthday message and then covered the bottom of the cake with strawberry laces (a favourite with the adults!).