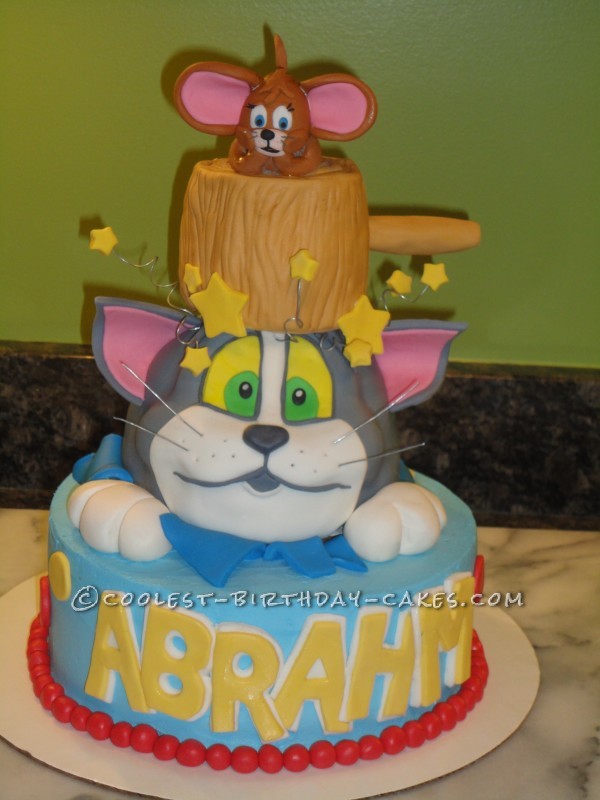 I made this cake for a little boy who wanted a Tom and Jerry cake.  I was a little worried when I saw the idea that the mother wanted, knowing that there was lots of sculpting required and I had to make sure the cake was sturdy as well.

The top part has a large wooden dowel through it for support and then it is sitting on the cake supported by dowels just like a second tier would be.

I sculpted the topper out of Rice Krispie treats and fondant.  I like to start with a basic Rice Krispie shape and then add small pieces and balls of fondant first to it to create the rest of the shape. I then cover with my whole piece of fondant and sculpt it around.

I used royal icing to attach the ears.

Tom and Jerry’s whiskers are wire.

The stars are attached by wire and I probably should have used royal icing to keep them on, but I just pierced the stars instead.  They stayed on just fine but they had a little ability to twirl.

I have discovered that the most important thing in sculpting characters is getting their eyes right.  The perfect character with the wrong eyes just doesn’t seem right.  But if you get the eyes right, other differences or flaws are not as noticeable. Lucky for me, Tom and Jerry’s eyes were easy and don’t have eyelids.  I hate doing eyelids.

This was my first cake of making something appear wooden with the gavel.  I actually have very little cake decorating tools and tend to use things I have already in my kitchen.  I actually used a fondue fork that I have to help me etch curvy lines into the gavel.  After I made a random pattern I went back with some brown coloring and added here and there to help bring out the marks.  The handle of the gavel is a dowel covered in fondant. I was worried about it falling out (I have since learned to compound my Rice Krispie treats as much as possible) but it stayed just fine.  I used some royal icing to help it as well.

Even though the cake is not large, I’m really proud of how the characters turned out on top.  My husband went on and on about it and he is my honest reviewer.  Abrahm’s mother was super excited, as was Abrahm, who was turning 4 years old.