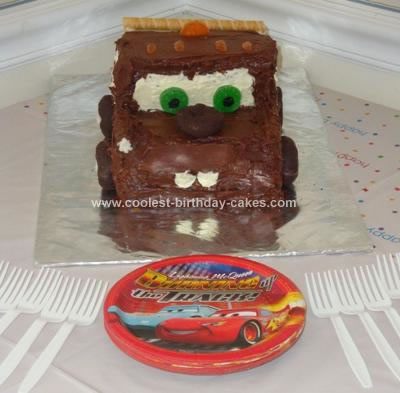 My son is a “Cars” freak and when I say freak, I mean that at 3 years old, he knows EVERY line of the movie!

I searched and searched for a “Cars” themed cake, but didn’t find anything that yelled, “Make me!”. Then I found the Mater cakes on this website. I took ideas from several cakes and molded them into this homemade Tow Mater birthday cake I made.

2. Once baked and cooled (stick them in the refrigerator to harden them up a little bit), cut off all the edges of the yellow cake and all but one of the shorter edges of the chocolate cake.

3. Cut off a section of the shorter edge of each cake (this will create the cab of the truck).

4. Layer the cake, using a small amount of frosting to “glue” the pieces together.

5. Add Oreo Sippers to the front of the cake (again using a small amount of frosting to “glue” them on).

6. Frost the cake, with the exception of the windows of the cab, with brown frosting (I used Chocolate Buttercream, which ended up being too dark, but was delicious!).

7. Frost the windows of the cab with white frosting (I used Buttercream).

8. Create eyes and lights with green and orange rounded gumdrops. To create the eyes, I simply put a little bit of Wilton’s Black Frosting in the center. For the lights, I cut one gumdrop in half for the big light, then sliced the edges of another off to create the little lights.

9. Create the tires with miniature chocolate doughnuts, putting a little bit of Wilton’s White Frosting in the center of each.

10. Add the tires and eyes to the homemade Tow Mater birthday cake, as well as the “engine” and the lights on the top of the cab.

12. With a little bit of the Buttercream frosting, make Mater’s buck teeth.

13. Cut Oreo Sippers to create the “boom” on the back of the truck. Use Wilton’s White Frosting to adhere to each other. 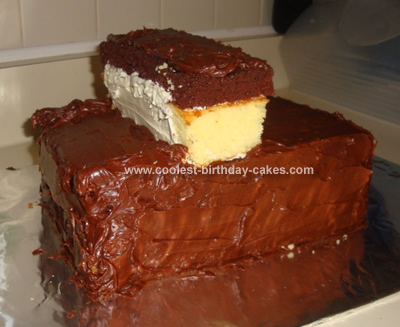 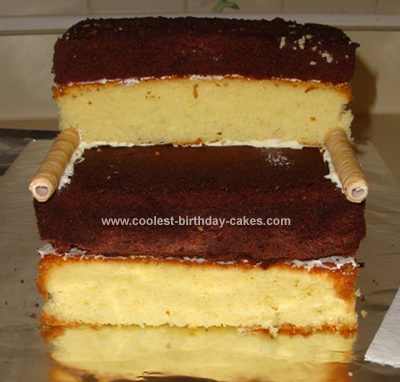 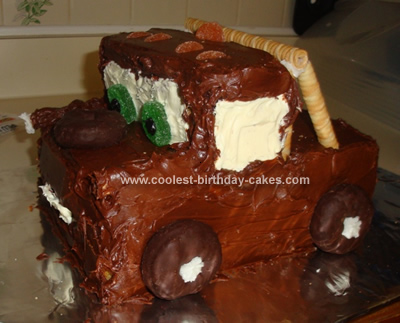