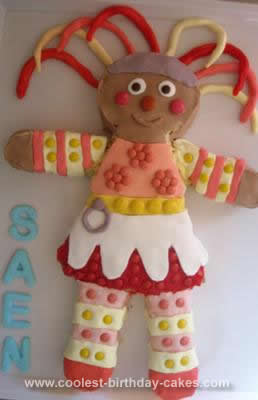 I made this Upsy Daisy Birthday Cake for our son’s 3rd birthday. This is the first cake I have ever made and decorated (I usually do cupcakes). I had my up’s and down’s – mostly my down moments were about trying to replicate the exact colours (specifically orange fondant). Once I realized I would never replicate the colours using fondant and liquid food colouring (the liquid makes the fondant too runny) I began to enjoy decorating this cake. I nearly threw the cake in the bin but I was glad I persevered as the look on my son’s face was worth the effort.

Preheat oven to 180 degrees C (fan forced). Grease and line with non-stick baking paper two 25 x 16cm cake tins. Don’t be slack and not line the tins – I ended up having to cook four cakes instead of two.

Making the cake – Beat butter, sugar and vanilla essence in a medium bowl with an electric hand mixer until the mixture is light and fluffy. Add the eggs, one at a time, beating between each addition. Fold in half the flour and milk. Fold in the rest of the flour and milk. Bake for about 25-30 minutes or until a skewer inserted into the cake comes out clean. Allow cakes to cool in the tin for 5 minutes before turning onto a wire racks to cool.

To cut out the shape was fairly simple. Move each cake to a chopping board. Use one cake to cut out the head, neck and dress in one whole shape. Use the other cake to cut out two arms and two legs. Remember you aren’t a professional and the audience you are catering for won’t be critical.

Making the Butter Cream – place all the ingredients in a small bowl and mix together using an electric hand blender until light and fluffy.

Ice the cake, legs and arms all over with Butter Cream and place in the fridge for 30 minutes.

I can’t tell you the amount of food colouring I used for each part of the cake (like I mentioned it nearly ended up in the bin). I used fondant for all the cake except for the red under-layer of the dress – I used pure icing sugar, 1 tablespoon of butter, red food colouring and 1 tablespoon of warm water. I used the left over red mixture to combine with fondant to make some of the hair.

Again, just remember the cake doesn’t have to be perfect. The kids will love it and love you for making it. Good luck!