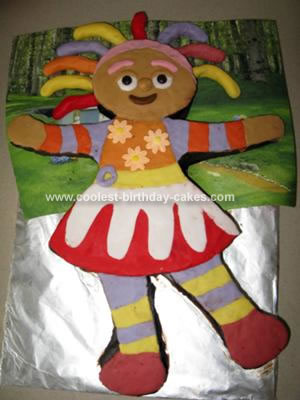 My daughter is a huge fan of Upsy Daisy from the children’s show “In the Night Garden”. Even though I had very little decorating experience, I couldn’t be talked out of making her an Upsy Daisy Cake for her second birthday.

I enlarged a picture of Daisy to cake size and made 3 copies. Using a chocolate mud cake as the base I cut out the head, body, arms and legs from the cake and then placed them on a board. I used a toothpick to mark out the pattern on the cake itself to give a guideline for where the icing had to be placed and shaped.

I used ready made icing from a cake shop for most of the cake and ready made daisies for the dress. The eyes were icing with brown MM’s on them. Her hair was made out of the icing and placed into the head with toothpicks. I coloured all the icing first into the appropriate colours, stored it in plastic bags and then started to roll out the icing as it was required.

The red for the dress was where I started and then just worked my way around the cake. I found it was best to roll out the icing quite thin and then place the print out on to it and cut it out to shape. I then placed it onto the cake and reshaped it according to the pattern already marked on the cake.

Finally I used a cover of a colouring book as a background for the top half of the cake. I propped it up higher than the bottom of the cake so that we had somewhere to rest the hair!

It took a lot of work but was well and truly worth it when I saw the look on my daughter’s face. All the kids were saying daisy, daisy when they saw it and were still talking about it weeks later!

In the Night Garden Cake