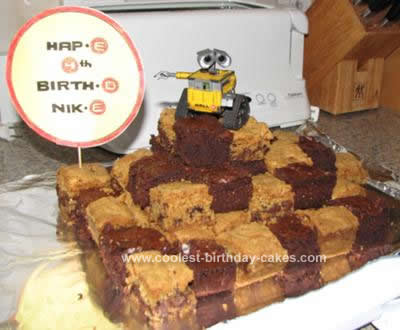 My son loves Wall E and is especially interested in the compressed garbage cubes that Wall E builds into skyscrapers, so this Wall E Birthday Cake Design focused on the garbage. My son does not like cake, so I used a brownie/blondie combo.

For the dark brown cubes, I used a store-bought brownie mix. I followed all the instructions and opted to add an extra egg to get more cake-like brownies (easier to cut and stack, won’t get as gooey). To make taller cube-like pieces, I used an 8in x 8in glass pan and baked bit longer to be sure the center was not gooey.

For the light brown cubes, I used a store-bought blondie mix and added a cup of chocolate chips for more color contrast. I followed the instructions on the box, and of course had to bake longer due to pan shape.

Once the brownies and blondies were fully cooled, I cut both into equal sized cubes. I stacked them in alternating order to get more color contrast. I turned edge and corner pieces inward so you can’t see the irregular shape. I placed my son’s Wall-e toy on top.

I free-handed the sign using paper and color pencils. I googled “Wall E font” to find font examples. I taped the sign to a toothpick and stuck it in a blondie cube. The blondie cubes were stiffer and less fragile than the brownie cubes, so I stuck candles in the blondie cubes just before serving. This cake kept just fine over night.