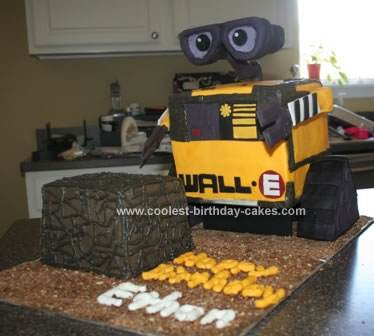 This Wall E and Cube Birthday Cake was my son’s second Wall-E birthday so I wanted to make it extra special. I got the idea to do an actual Wall-E from the ones I saw on this site, but I wasn’t sure how I wanted to make mine. This was the 9th birthday cake I’ve made for my kids. It was the most involved cake I’ve done, but most of the work was prior to baking the cake. It took me four days to complete it. However, I wouldn’t have wanted to do it in any less time than that because it would have been too overwhelming.

I baked the cakes on the third day and used an entire box of white Wilton fondant. I hope some of my suggestions below help you with your Wall-E cake.

I made Wall-E’s eyes first. I bought two round foam cylinders that were the size for each eye. Shaped the back to be thinner and shaped the eyes so they were more like Wall-E’s and cut holes in the front for his eye sockets. I then used thick toothpicks to hold the foam pieces together. I spread a light layer of premade icing onto the foam, then wrapped the eyes with one piece of fondant, but not covering the eye sockets. The light gray eyes were attached after that by spreading a little frosting on the foam and brushing the edge of the fondant with pure vanilla extract so it would adhere to the other fondant.

I then attached the eyeballs by brushing the backside of the pieces with vanilla extract before putting them on.

The neck was made with a plastic dowel and PVC pipe. My husband bought the PVC pipe for me and glued all the pieces together. Once it was dry I wrapped it with fondant, then during assembly I brushed the top with vanilla extract and secured it into the bottom of the eyes.

The wheels were made out of circle foam. I cut the foam to the shape of the wheels and ended up using two circle pieces for each wheel. I glued the foam pieces together then attached gray fondant to each side using a bit a frosting so it would adhere to the foam. I then used a little bit of frosting and attached one long piece of black fondant over the top for the tread. After that I cut out strips of black pieces to give the treads a more realistic look and circles for the gears.

The arms and hands ended up being simple, but took a lot of work because I didn’t know what I was going to do. For the arms I used two wooden dowels attached to a marshmallow foam I found in the kids craft section. The dowels were in a L shape so one went in the cake, the other was the arm and the marshmallow was the socket. I would suggest gluing the dowels to secure them to the marshmallow. I didn’t do that and I had a few problems.

After that I glued a flat stick to the arm dowel to extend out from the edge. I then cut up flat pieces of sticks and glued them together to form the hands. This was the frame so the hands would have some stability. After the hands dried I glued them to the flat sticks that were attached to the arm dowels. I wrapped the arms in yellow fondant and the hands in gray fondant. I then made two white rectangles adding black stripes for the front of Wall-E’s arm. After the fondant hardened I brushed on pure vanilla extract to the arm and attached the rectangle pieces. When I attached the arms to the cake I needed to insert extra wood dowels to hold the arms up.

Wall-E’s Box and cube was made using a 10 inch square pan. I used three cake mixes, cut the center of each cake to 7 inches square and used the side pieces for the cube. I got the pieces that made up the cube to stay together by making sure all the sides were flat and I spread icing on each side while assembling the cube. I bought wood at Micheal’s to make the fame for Wall-E’s body to sit on. My husband cut and glued the stand together, I painted it black, then covered the top with silver paper for wrapping cake boards. I used a buttercream frosting between the layers and for the outside I did a crumb coat first, then covered it with yellow frosting. After putting it in the refrigerator for about 30 minutes I took a smooth paper towel and smoothed the frosting with the side of my finger very gently.

The detail work for Wall-E was done with a Wilton #47 tip. I piped it on, then went back over it with the side of a toothpick to blend the lines. I’m not sure this was the best option, but it was the only one I could come up with at the time. The cube was a lot of fun to do. I frosted and smoothed the cube first. Then, I made the frosting darker and used a Wilton #4 tip to make the lines.

It was very random and fairly easy to do.