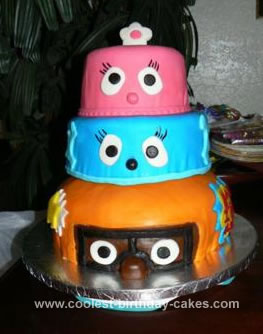 This three tier Yo Gabba Gabba cake I made for my grand daughter’s first birthday party. It was a hit! She absolutely loves the show and loves to dance, so we had a Yo Gabba Gabba themed party with live characters too.

I have been designing cakes for a year now learning a lot of different techniques on YouTube. And over the time I have gotten really good without even going to school for it. So I decided to make something big and wowing!

I started with three cake pans 10″, 8″ and 6″. You can make it as thick as you want. I decided to make a DJ Lance, and since the cake was for a girl, I decided to also do two of the girl characters Foofa and Toodie. So after crumb coating all three tiers I decided to freeze the cakes for easiest placing of the fondant. This works well to prevent the fondant from sliding or tearing; however, I noticed that once I covered the cake with fondant, it made it very difficult to smooth because the cake started to defrost and the fondant became very moist on the cake and I had to let the cake dry completely over night before starting to decorate.

The first layer I started off making DJ Lance, this I made with two 10″ cakes. I leveled the 1st cake and the 2nd layer I left top on. I just shaped it to look more like head or hat shape which I put on top of leveled cake. After frosting I made some orange colored marshmallow fondant and placed it over the cake. Then I cut a rectangle shape of orange fondant off the cake and used some dark brown fondant in its place to create the face.

I used two of the fondant round cutters for the eyes, the medium and the small. I used the medium one for the white part of the eyes, and small for the black part. Then I just took a desired size of brown fondant and shaped it into what I wanted the nose to look like. Then to the hardest part of the entire cake which was the glasses. I used black fondant that I had to make in severely parts. You may want to think about a better way to this because this was a big challenge and I was not happy with it but I continued anyways. I put the hat logo and also the Yo Gabba Gabba logo at the end of putting the whole cake together.

The second tier was Toodie. I used two 8″ cakes both leveled. After frosting I used sky blue mixed with turquoise fondant over the cake. Then I used the two round cutters for the eyes again but only this time I shaped it to a more oval eye shaped. Then I took a small piece of black fondant and rolled into a ball shape for the nose. I used a lighter turquoise fondant and hand carved the whiskers shape and then I hand colored eye lashes with black frosting color.

The top tier was Foofa, I used the 6″ leveled cake and used a pink fondant over cake. The eyes and nose I did the same as Toodies. And added a flower on top. And finished all cakes with a nice boarder. 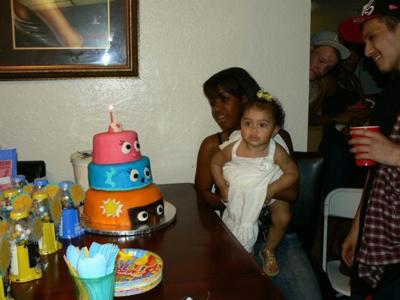