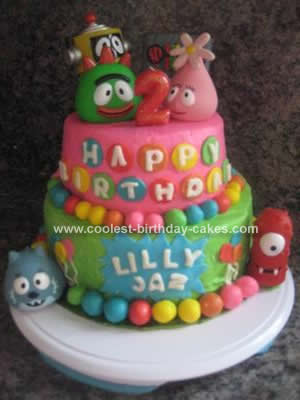 This Yo Gabba Gabba Birthday Cake was my first attempt at making a two tier cake for my daughter’s 2nd birthday. The Yo Gabba Gabba characters were bath squirter toys that I purchased online. The boombox was a rice cereal treat covered in fondant and decorated with decorator icing.

The cake was made using two nine inch cake pans and one 1.6 L Pyrex bowl for the top layer. You could use two ” cake pans also for the top. For the bottom I used doctored up vanilla cake mix to make it sturdy. The top cake was a box chocolate cake mix. I put the bottom cake on a 10 in cake board covered in a green scrapbooking paper that sticks. The top cake was put on a 8 in cake board cut to shape the cake.

I cut the top cake in half and then filled the top and bottom cake with homemade buttercream and crushed oreos. Then I crumb coated both cakes. I colored the buttercream with Wilton’s rose gel coloring and leaf green gel. After the buttercream crusted I used viva paper towels and fondant smoother to make a smooth finish. For the fondant decorations I used Duff’s buttercream fondant that I used a coupon for. It tastes a lot better than most pre-made fondants.

I then sectioned off the fondant and colored them using Wilton’s orange, red, leaf green, teal, yellow, and pink gel coloring. For the dots behind the lettering I smoothed a small section of the colored fondant on a fondant mat and cut them out using the bottom of a large pastry star tip. I used the remaining colored fondant to make fondant balls. I had small letter cutters that I cut the letters out in white fondant.

The balloons were cut out with the letter q I had and made strings out of fondant. The sign behind the name was colored in sky blue gel coloring and cut freehand using an exacto knife.

To assemble the cake I put the bottom tier on the cake pan and put the fondant balls down to hide the imperfections. Before I put the top layer down I used the Pyrex bowl to imprint where I wanted the top cake tier to go. I then used 5 cardboard dowels in a circle where the top tier would go so the cake doesn’t sink in. I then dropped the top cake which takes two people. We used a sturdy large flat spatula. Any imperfections could be smoothed out using a viva paper towel or covered with the fondant balls. I then attached the letters to the dots by painting a small amount of water to the back since it was dried out.

I then attached the dots to the buttercream and added smaller fondant balls to the bottom of the top tier. I then attached the sign and the balloons to the bottom. For Plex and the boombox I just covered a square of rice krispie treat with fondant and used bbq skewers to stick them in the cake for a higher look. I assembled the rest of the characters. I tried putting Muno & Toodee to the side but ruined the cake. I had a little extra buttercream to cover up the mistakes.

I was very proud of my two tier cake! My daughter and everybody else loved it and I hope you do to! 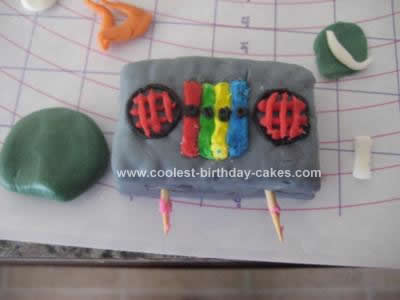