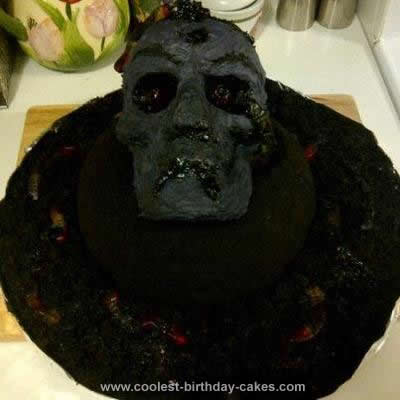 Not being a baker this was my first attempt. A co-worker wanted a zombie cake for her son’s 21st bday. I decided to accept the challenge of attempting to make it. I bought the Wilton 3D Skull Cake pan, looked on line for Zombie cake ideas.

This Zombie Cake was a challenge but the skull pan really helped.

The head is a pumpkin pie cake, with cream cheese/butter cream icing mixed into one. I used icing color black to dye him. Then I used same icing color to paint his eye sockets. Red eyes are cherry pie filling. Oozing cuts on his head is cherry pie filling dyed black. Cherries made blobs which was cool.

The base for the skull is a Wilton’s bundt pan, chocolate cake with chocolate icing covered with crushed Oreo cookies to create a dirt look.

The muddy dirt is chopped up chocolate cake with chocolate icing mixed in to give a moist muddy look. Gummy worm coming out of the eye is colored with cherry pie filling dyed black. It was a smash hit at my friend’s son’s 21st birthday. They made him eat the face. All the attendee’s agreed it was the coolest cake they ever saw. Thank’s to coolest cakes for the many ideas. 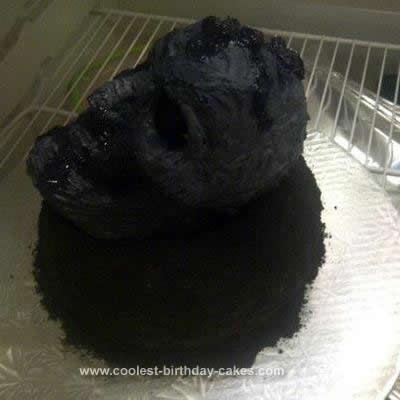