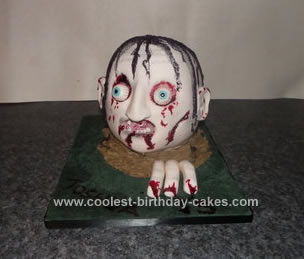 We were asked to create a Zombie Cake for a friend’s sons birthday.

We cooked 3 x 8” round orange flavoured Madeira cakes. We stacked the cakes on top of each other layering them with lemon flavour butter cream.

We then carved the cakes into a head shape and gouged out the eyes and the mouth using a melon baller!

Next we crumb coated the head and put it into the freezer for about 15 mins. We then covered the cake in flesh colour fondant pushing the icing into the eye sockets and into the mouth.

We made the ears and nose from flesh colour fondant and glued these to the cake. The eyes were made from white fondant and streaked with blood vessels using a food colouring pen. We were unsure how to create the hair. We had a brainwave and made some grey candyfloss and applied this to the head!

Unfortunately the following day, the candyfloss had dissolved slightly due to the moisture in the icing!! We were a bit disappointed but it appeared to give the desired effect of matted zombie hair!!

We tried to make the zombie look as if it was pushing up through the ground. The blood was made from piping gel coloured with red food colouring.

We were told that the cake was cut in the true zombie style, A KNIFE THROUGH THE TOP OF THE HEAD!! AAAAAHH!