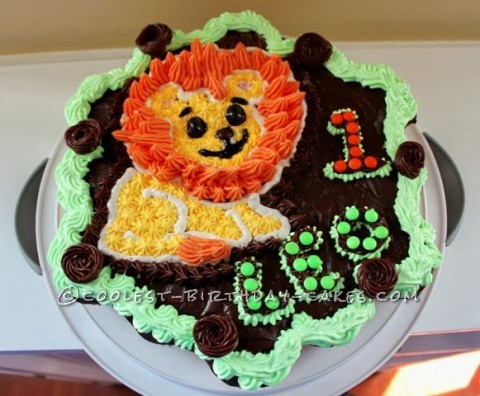 This lion cupcake birthday cake was a very easy cake to make!  I baked 2 dozen cupcakes and smushed as many as I could on a platter side-by-side in a circle pattern. I put a generous layer of frosting across all the tops (I did not lift up in between cupcakes).  After letting the frosting harden in the refrigerator, I piped on the outline of the lion.

I had printed the lion out from the internet and traced it with frosting onto a piece of wax paper. Then I flipped over the wax paper on top of the cake to make an impression of the lion and filled in any of the gaps. I pulled the tip of the frosting bag out in long strokes to make the mane of the lion appear more pronounced. After adding in a few border details, I used M & M’s to cover the eyes and outline the number and name. 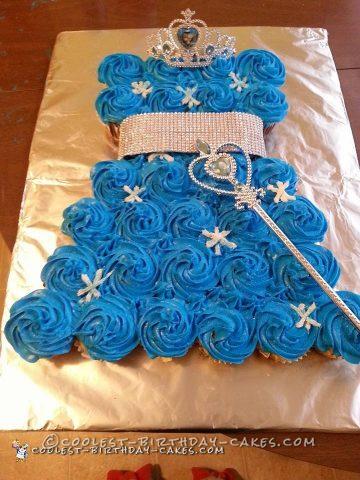 I made this for my nieces 2nd birthday, it was my first cupcake cake and everyone loved it. I used 30 cupcakes, half chocolate and half white and also used rhinestone mesh for the waist belt and bought the crown and wand.

Next, I covered my cake board with foil and applied icing under each cupcake. I filled in the spaces between the cupcakes and then iced them. I used blue edible sugar sprinkles that made the cake shine beautifully. The cupcake birthday cake was huge hit and I can’t wait to make another one! 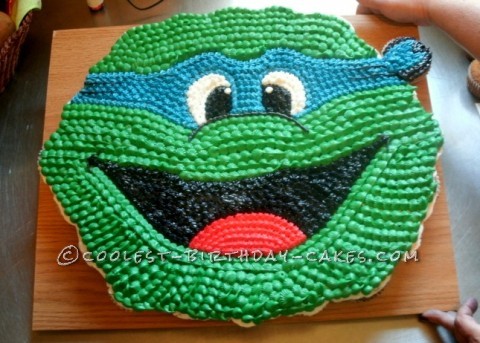 We got a request to make a Ninja Turtle cupcake birthday cake for 50 children. Okay, how do we do this? We never made a cupcake cake. So we went online and got some images of Ninja Turtles. We then had the challenge of what to put it on. My cake cardboard’s were not big enough. I went in my garage and found a nice piece of plywood. I washed it well and we took our cupcake papers and arranged them around the board to see if they would all fit. Voila. They did.

We baked all the cupcakes and then arranged them on the board. Crossed our fingers that they were arranged correctly because if they weren’t there was no turning back.

I frosted all of them with chocolate icing and in the freezer it went for about 15 minutes. Then we went ahead, piped the template for the colored frosting. Stood back and was very proud of ourselves. The best part is that the 5 year old loved it and so did the parents.

This was a fun project. 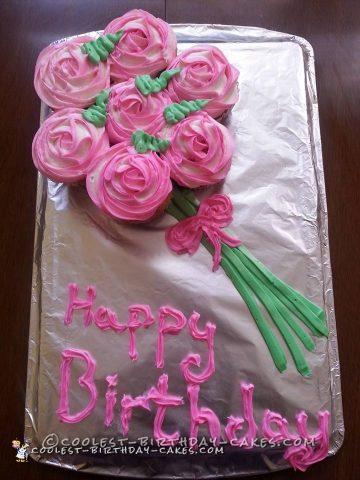 I made this cupcake birthday cake for my mothers birthday. It was quick and easy and I think it turned out beautifully. It’s a fairly easy process if you have the right tips, I used 1d for the cupcakes and a flat one for the stems, and whatever I could find for the words and bow. 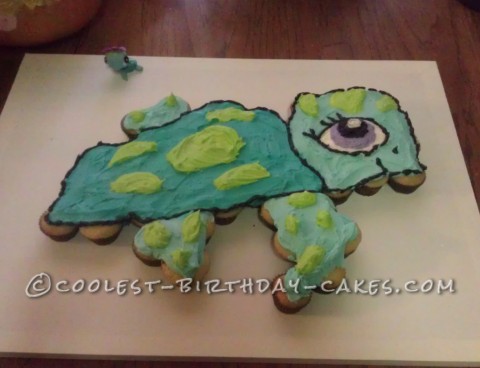 My daughter turned seven and told me she wanted a Littlest Pet Shop Sea Turtle Cupcake Puzzle Cake. I admit I wasn’t sure how to create a cupcake puzzle cake. I knew it would be easier to arrange the mini cupcakes than the normal size cupcakes but I wasn’t sure how I was going to frost them. So, I went through and baked two batches of mini cupcakes (one yellow cake and one chocolate mixed I arranged the cupcakes half vanilla and half chocolate (per request).

The cupcakes were arranged into the shape of the Pet Shop Sea Turtle on to my cake board (a piece of masonite covered in white contact paper).  I took the buttercream frosting and mixed my colors.  I found spreading the frosting like you would a sheet cake worked best to make it look like a cake.  Next, I piped all the details with a fine tip piping tip.

The “puzzle cupcake cake” was a HUGE hit and I have been asked by my daughter’s friends to make their birthday cakes. I will say I love the cupcake puzzles opposed to a giant cake because  people are more likely to grab cupcakes than cake, leaving you with a ton of cake. 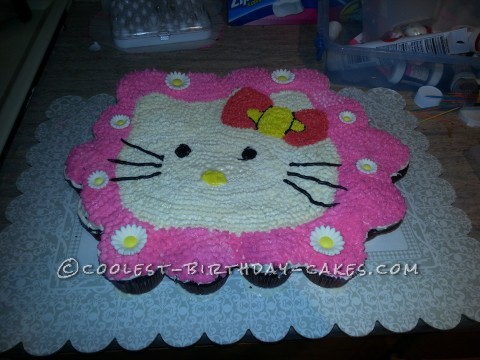 My 5 yr old loves Hello Kitty and wanted me to make the cake. I decided for first time ever to give a cupcake birthday cake a try!

I copied Hello Kitty on parchment paper and laid it on cupcakes. Then I star-tipped pink around face then filled in the Hello Kitty face. My daughter’s face was priceless when she saw the cake I made. It was exciting!

This cake star tipping takes a while. The cupcakes should have been more even as I had some bigger and some smaller. Initially I really wasn’t sure the cake would turn out that good. Once I got to the last star tipping I had to do I felt so relieved! Everyone complimented the work and for the first cupcake birthday cake I was happy:)

Oh, my daughter likes flowers so she picked them out! The hardest part for me is how fast the frosting melts so I had to stop a lot to refrigerate. But this was the fastest I star tipped so I was happy with that! Her party was all Hello Kitty and all went well. The cake made the event :)

Take a look at more of the coolest cupcake cakes…