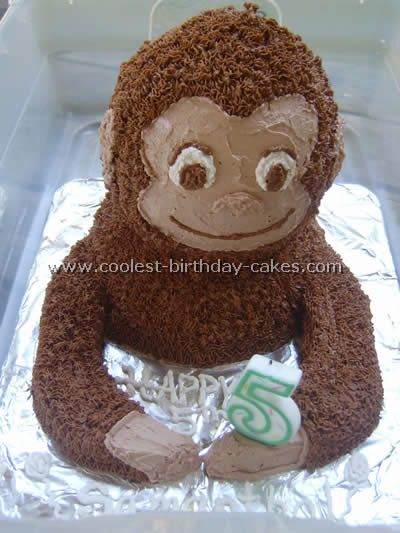 I made a Curious George for my daughter’s fifth birthday. I used a Wiltons sports ball pan for his head, the Barbie doll mold for his body and then I made a square cake that I cut up to make his long arms. This cake was different to the other Curious George cakes I have seen on site. To attach his head to his body I used long toothpicks inserted into his head to push into the body and keep it in place on top. I also used toothpicks to attach the arms to his side so they too would not move.

to make George look like George I got my daughter’s stuffed animal and then used home made buttercream frosting tinted brown and also lightened to make tan to create the George we all know and love. He was a huge hit with my daughter and everyone at the party! 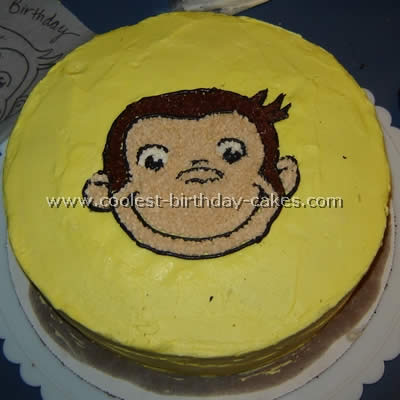 I made this cake for my son’s Curious George themed third birthday party. First I baked two 9″ chocolate cake rounds. (Better Homes and Gardens Cookbook has a great simple chocolate cake recipe). When cooled I frosted a layer of canned chocolate frosting between the layers. For the outer frosting I used the simple buttercream recipe from the Wilton cake website. One batch tinted yellow made more than enough for the base coat of the cake. I then made a second batch of frosting for the decorations and borders.

For Curious George I enlarged a party napkin on a photocopier, traced it onto a piece of parchment paper and when the yellow frosting had crusted a bit used a sewing needle to poke the outlines onto the cake. When I lifted up the paper there was a very delicate dotted outline of George that I traced using black frosting and a writing tip. After that I simply filled in the other colors for George’s face, eyes and fur with small amounts of buttercream frosting tinted using Wilton’s Brown Christmas Red and Royal Blue colors using a small star tip.

For the fur I used some leftover chocolate frosting from the inside layer, it was the perfect color! This cake was a hit and I was very pleased with the outcome! I have made Curious George cakes before, they are so easy. Enjoy! 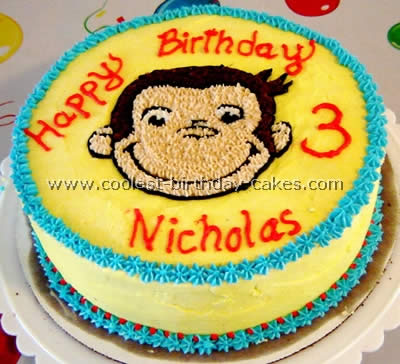 For my son’s third birthday we went with a Curious George themed party. I made two 9″ chocolate cakes and frosted the inside layer with a can of chocolate frosting. For the outside I used the buttercream frosting recipe from the Wilton cake website. I made one batch and tinted that yellow. That made more than enough frosting for the outside base coat.

I made a second batch to use for decorating tinting a bit at a time to use for George’s face, the lettering and the border. For the dark brown portions of George’s fur I went ahead and used some of my leftover chocolate frosting from the inside of the cake. It was the perfect color! For the face outline we enlarged a party napkin that had George’s face on a copy machine. When I got a size I liked I placed a piece of parchment paper on top and traced it. Then after my yellow frosting layer had hardened a bit I placed my parchment drawing on top and used a sewing needle to punch holes along the outlines. When I was done I just traced my holes with black frosting. I just filled in the rest of the pattern with a small star tip. Super easy and hope this will help others with their Curious George cakes!

Cake by Colleen A., Surrey, BC 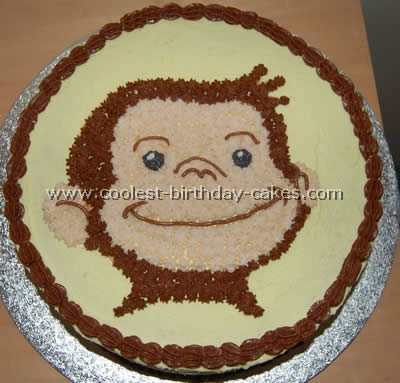 My two year-old daughter loves Curious George. I used Wilton’s buttercream icing recipe tinted with yellow gel food coloring and frosted the cake. Then I prepared chocolate butter cream and a light brown butter cream. After looking at other Curious George cakes, I decided to use piping gel to trace an image from a Curious George coloring book onto parchment paper (enlarged on a photo copier so it was just his head).

I used a paint brush on the back of the parchment paper to help transfer the gel when I turned it over onto the cake. I used a small star tip and medium consistency icing to fill in all the features. I used the writing tip and thin consistency icing with a touch of piping gel to do the outline. (Next time I’d buy pre-made black icing in a tube to do the eyes because it takes forever to try and mix your own black. As you can see it turned out to be kind of gray!) To finish I piped a border on the cake using the medium consistency butter cream. 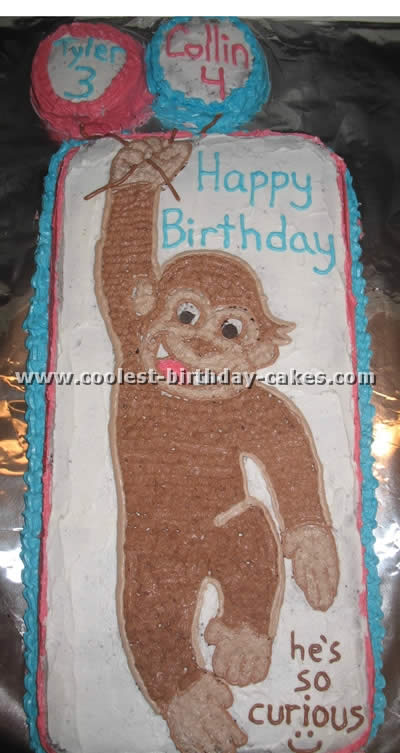 My boys’ birthdays are 10 days apart so we celebrate them at the same time. Turning ages three and four, they both really like Curious George. I found a picture on the Internet for Curious George cakes and drew it freehand on a larger sheet of paper then cut it out and traced it with a toothpick onto my cake.

The cake is a 9×13 and a 6×9 put together. The two “balloons” are cakes made in glass custard dishes. This was my first attempt so I bought an 18-piece Wilton beginner kit which had the tips I needed (#4 and #16 I think?) The boys loved it. 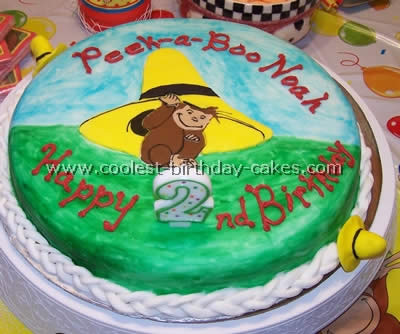 I used a 12″ round cake pan, frosted a thin layer of frosting on the cake then covered it with white rolled fondant, colored additional fondant yellow and brown to make George and hat. I also made two small yellow hats to put on outside of cake. I also made a braided rope out of fondant for a border to encircle cake.

Once Curious George was assembled I used a large pastry spatula to transfer him onto the cake. 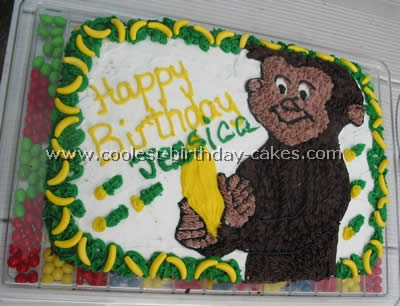 I made this cake for my daughter’s sixth birthday party at her school. I found other Curious George cakes on this site so combined a few for this idea. I used two chocolate cake mixes, a large tub of vanilla icing, a tub of chocolate icing, a can of green icing, a can of yellow icing, a tube of black icing and candy banana pieces. I marked out an outline of George with a toothpick and filled it in with the tube of black icing.

I filled in the body with chocolate icing using a star tip for texture. For the ears, face and hands I mixed some of the chocolate and vanilla to make a lighter brown. I trimmed the bottom of the cake in the chocolate icing and made lines going from the bottom to the top all around the sides to represent the tree trunks. I squiggled the green icing all around the top border for the leaves and added the banana pieces all around. I added the six flowers to place the candles in and wrote the letters and drew the banana using the canned icing.

The cake was served on a clear tray filled with several different candies to add color. The kids absolutely loved it! 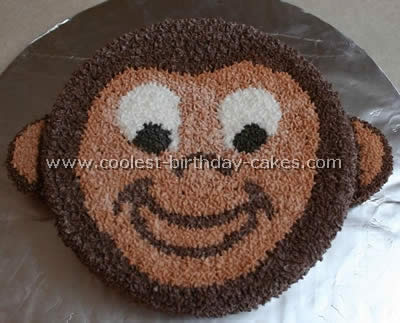 I used one 8″ round cake pan for the head/face of Curious George. For the ears I used one cupcake and cut it in half placing it on the side of his head. I attached the ears with icing. Using colored icing, I used #16 tip to create the face. You can be creative as you want for the mouth – I outlined where the icing was going to be first so I knew how large I wanted the eyes, mouth, face etc.

There is not a cake pan for Curious George Cakes, so when my niece turned one they wanted Curious George – and I wanted her to have him! I had only had one cake decorating class so I had to think of something pretty simple. This was it – just stars.