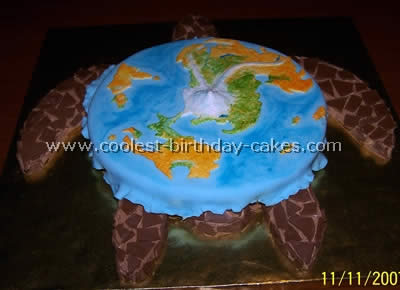 I made this Discworld cake for my husband’s 35th birthday. I asked him what he wanted and after a moment’s thought he said “Why not Terry Pratchett’s Discworld”. Between us we figured out how to go about it. To make the templates I used artwork by Paul Kidby (I think) that my husband had on the computer. We printed out a number of copies making the disk’s diameter 25cm so that I could then trace off each of the continents as well as the turtle’s flippers head and tail. I then used the tip of a skewer to mark the coastline and major rivers/lakes through the tracing paper onto fondant icing that I’d rolled to about 3mm thickness.

I then cut out the continents with the tip of a sharp knife. Because it was all so small I only made the major continents and a few of the biggest islands. I modeled on extra fondant icing for the major mountains and ranges and used cut the tip of a toothpick to mark the “Tower of Art” in Ank-Morpork. I made the continents over the week leading up to the party but due to high humidity they didn’t dry properly. That made painting them interesting! I mixed up edible powder colors with water and by trial and error got roughly the effect I wanted.

The Disc itself was a chocolate and sour cream cake made in a 25cm cake tin. For the great A’tuin (the turtle) I made a very rich chocolate mud cake. I iced the round cake with chocolate buttercream then covered it with rolled fondant which had been colored blue. This was trimmed in an uneven jagged edge and flared out to represent the water flying off into space. I then used my templates again to mark where each continent lay and assemble them into place using a little sugar glue to secure them. When I had shaped the parts of the turtle that was also iced with chocolate buttercream topped with thin pieces of milk chocolate to simulate the pattern of it’s skin then attached to the centre cake.

Finally I mixed some more blue powder and water to paint onto the sea to give some variation of tone (deep water/shallow water). This was a long process of painting on and wiping off until I got the effect I wanted. I was definitely learning as I went with this Discworld cake but I was very pleased with the result!