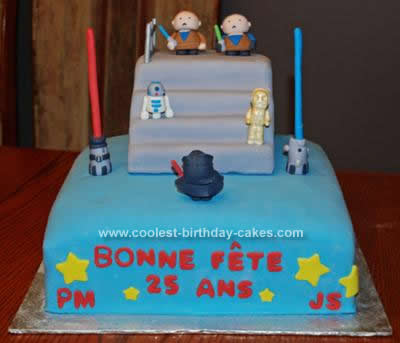 I had this Star Wars Birthday Cake idea when we decided to make a surprise party for my boyfriend and his best friend. Since they’re both best friends since they were 5 years old and they have one day difference, I decided to make a cake for both and they both love Star Wars! I wanted to make Star Wars theme but I wanted to include them as if they were Jedi too because it would of been more personal to them. That is why I placed them both on top of the cake with a Lightsaber ready to fight against Darth Vader with the help of R2D2 and C3PO!

First of all, this is my first ever decorated cake, that is why I find there is some improvements to make. I baked my chocolate cakes (from a already made preparation, I just had to add eggs and water). I made two 12 x 12 square cakes and two 6 x 6 square cakes. Once they were room temperature, I put the two 12 x 12 cakes together, with buttercream in the middle I covered them with buttercream icing, I did not make the recipe thought, my mother in law made the icing for me. (And did the same with the smaller square cakes). After icing my cakes, I put them in the refrigerator at least an hour to make the icing hard. I bought already made fondant, white to be precise, so I had to add color myself. After coloring my fondant and preparing it to go on the bigger square cake, I took out the cake and put the fondant on. I had a bit of a hard time putting the fondant on the first time, because I never used it before and actually never saw anyone use it before and that is why the fondant is not perfect on the cake. I did the same with the smaller squares and stairs of course, that I put together with chocolate cake rectangles. For this part, I don’t really have advice to give, because I think I needed some myself, maybe to practice small cakes at home before doing a big one?!

Few days before, minimum 48 hours before, I had to do all my decorations and characters. I made all of them with fondant too. for the characters I made the head, body, legs and arms separated, but still made all the details the same day. 48 hours after, when they were hard enough, I assembly them with ‘glue’ which is made from meringue powder and water. The exact recipe is 2 portions of meringue powder for 1 portion of water. (for example; 2 teaspoons meringue powder and 1 teaspoon water). To assembly the head, body and ‘feet’ I used small pieces of toothpick and added also glue. I used a toothpick to paint (with black food coloring) the faces, but only once everything was all put together. I did the same thing for the Lightsabers and the robots. For the Lightsabers I assembly the blade at the end, as we can see, the one of the right broke but I managed to glue it back. Maybe I shouldn’t of done them so long, it was really hard for me to make them hold.

The thing that for me was the hardest and most frustrating was the fence that we can see on the top right, next to the Jedi. My first idea was to make fences all around except in front. I made my fences laying down with fondant, when they were dried, two of the fences broke and I didn’t have 48 more hours to redo them, so I just put one. I don’t know how else I could of done the fences…maybe with cut out cookies and then I’d cover them with royal icing? I really don’t know. I painted the fence and C3PO with metal and gold sparkles, that I added a bit of water and applied on them to give the metal fence look and the robot gold look. At the end, I rolled some fondant and cut out letters and stars and glued them with the meringue powder glue, which worked perfectly.

The only real tip I can give is to practice and to be patient. When I bought all my things for the cake (like I said earlier it’s my first decorated cake ever) I didn’t know much and asked advice from the lady and she told me that coloring the fondant black or red was easy with her food coloring, to be honest, I found it really long and needed a lot of coloring.

If anyone has tips to give me too, seeing how I made this cake, I am free to hear them out, I know most people here probably have a lot more experience than I do and since I really loved making this cake, I will make more so any advice is accepted!

I hope you enjoyed reading this and seeing my cake may have give you ideas. May the force be with you!

Grown Up Star Wars Cake for a Self-Confessed Geek