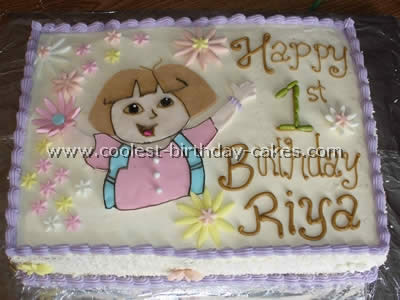 This Dora the explorer birthday cake was for a friend’s daughter’s first birthday. It is made up of three layers and two types of filling: plain white cake and raspberry filling, lemon cake, custard filling and vanilla cake. The cake is masked with buttercream icing and sides are coated with lightly toasted coconut flakes.

Dora is made out of rolled fondant that I colored with food coloring paste. I cut out flowers with a fondant daisy cutter and stuck them on the cake with some buttercream.

This Dora the explorer birthday cake was made using two Cadbury chocolate cake packets in a rectangle cake pan. I simply cut the corners of the cake off to give the oval shape. I cut the cake horizontally and used chocolate frosting in the middle of the cake. My daughter has a plush Dora doll that I sat up on a chair in the kitchen to model for me as I was decorating her face.

The icing is buttercream. For the colors I used Wiltons Ivory with a very tiny amount of red and yellow colors mixed in to get Dora’s skin tone right. The Wiltons brown coloring I had wasn’t quite dark enough for her hair so I added some cocoa powder to give it a chocolately coloring (using a piping bag to get the stringy look) and used Wilton’s gel for her eyes, nose and mouth. Daughter loved this cake and for her party all the other children and parents were awed – a proud moment for me!

I found a picture of Dora the explorer that I liked from a coloring book. I traced it on to wax paper and then used frosting gel to go over the lines on the wax paper and put it on my already frosted cake. Slightly rub then slowly peal off.

Now you have an outline to follow for you Dora the explorer birthday cake. Go over your lines with black frosting and then color it in with your choice of colors.

Since my boss knew that I love to make cakes she asked me to make a Dora the Explorer birthday cake for her daughter’s second birthday party. The pressure was on! I knew her daughter really liked the backpack character as well as Dora so I found a few pictures for reference and came up with the “looking over her shoulder” pose.

The body shape was carved from one 8 x 12″ pan and the head took another 8 x 12″ pan to itself! So very simple just two cakes to make! The most time consuming part was mixing all of the icing colors in their own plastic baggies and then icing each section. From past experiences I have a very useful tip when icing cakes: After I carve the body shape, the edges of the cake are very crumbly and hard to ice. I have found that using little dots instead of smearing the icing on helps a lot! Just a suggestion!

I work a lot with chocolate when decorating cakes. For this Dora the explorer birthday cake I traced a picture from one of the books. I then used melted white chocolate, milk chocolate and dark chocolate to trace and colour in Dora on waxed paper (put waxed paper on the sketch). I mixed the white and milk chocolate until I got the skin tone I needed, dark and milk for the hair and outline of her body. You have to let the chocolate harden before moving to the next stage i.e. coloring in her clothes and adding facial features.

For this particular cake I was using cream cheese icing (same recipe you would use for carrot cake). I colored some and applied to Dora’s clothes. The colors are more vivid. Dora had a story called “Little Star” which is where I got the star idea. I sprinkled the rest of the cake of sugar sprinkles in star-shape and colored sugar(you can get at the bulk store). I also use melted chocolate to write messages on the cake. If you make a mistake you just put the cake in the fridge to let the chocolate harden then remove the mistake with a palette knife or toothpick.

Thanks to this website for ideas – it’s how I got this Dora the explorer birthday cake done!

Cake by Diana B., Burke, VA

I baked this Dora the explorer birthday cake for my daughter’s third birthday, September 2007! I used a Wilton Cake pan with a butter cake recipe I made from scratch. I followed the directions that came with the cake pan using Wilton’s buttercream icing recipe. It took me a total of five and a half hours start to finish. So to make it easier I baked the cake two days before the party, cooled the cake, wrapped it in plastic wrap and put it in the refrigerator. Then the day before the party I iced the cake.