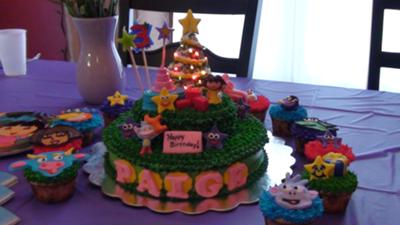 I made this cake and cupcakes for my daughter’s 3rd birthday. She LOVES Dora and Christmas and her birthday is December 11th. They had been showing previews on TV for Dora’s Christmas Carol for probably a month. She couldn’t wait to see it. I knew she was having a Dora birthday party, but I wasn’t sure what I was going to put on the cake. After tossing around several ideas, my husband mentioned making a Christmas cake. I thought that would be cool. Then I mentioned having real lights on a fondant tree and he said you can’t do that……well, I did! I tried to make it easy since I work full time and my husband works nights so nothing is homemade as far as the icing,fondant,and cake. I saw the idea for the fondant cupcake toppers on another site. This was my first time using fondant so it was fun, but very time consuming. Thank goodness my older brother is very artistic so he helped me make the character faces. He probably made more than me I’m sure! I was very slow. We made the faces on Thur night and then I baked the cupcakes and cakes. I went ahead and decorated the cupcakes late that night, but froze the cakes for decorating Friday night. I made the fondant Christmas tree by molding the fondant into a tree shape and using small scissors snip the branches(saw this on you tube). The lights were found at Wal-Mart where the miniature christmas villages are. I used 2 small strands(1 would have probably been fine) which had small boxes for the batteries. I waited till Sat before the party to assemble the cake. I wasn’t sure how to hide the battery boxes. I originally thought about shoving them inside the top of the cake,but I was afraid it would mess everything up, so I proceeded to wrap them up like a present and kinda position them on the bottom layer behind dora and the tree. I just added a little yellow icing around the tree like garland and round sprinkles to act as ornaments and then of course a little powder sugar with some pearl dust in it on the tree to simulate snow. Of course you can’t tell in some of the pictures that the snow was glistening and the lights were real, but it looked neat!!! Everyone loved it, but most of all the Birthday girl and that is what’s important!