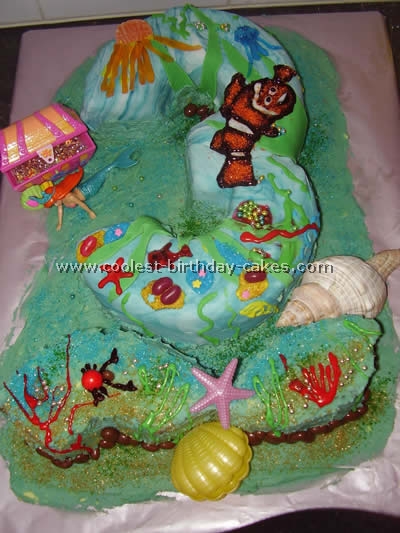 This Finding Nemo cake is really a whole ‘under the sea’ theme….though it contains Nemo and The Little Mermaid.

I made the number three by making two ring cakes & cutting out appropriate pieces. I used these leftover pieces to make the ‘sea bottom’. The Icing for the bottom & surrounding water is buttercream tinted blue.

The number 3 is covered with sugar paste which I just bought from a specialty cake supply store. I used various lollies to make creatures…crab, octopus and sea snake. Nemo is drawn out of icing gels which I just found in the Supermarket; also jellyfish is out of gels along with seaweed coral and sea stars.

On top of the gels for Nemo I sprinkled blue decorative crystals which I also found in the supermarket. I also sprinkled these over the ‘water’ and brown crystals on the ‘sea bottom’ for sand. Found some plastic toys and a real shell and just placed these around the Nemo cake for an extra touch!!

For the border I used the Wilton tip #21. From local cake decorating store (Wine & Cake in Norfolk), I purchased the Nemo and Friends, along with a treasure chest, foil wrap chocolate coin and candy seashells of various types. Chocolate coins are on each corner of cake and around treasure chest. Simple and fun!

I made these cakes for my son’s second birthday. I made the large cake with a small round layer on top. I used the leftover batter to make the small round individual cake for my son. I used a buttercream icing and made many tropical colors for the sea.

I got this Finding Nemo cake idea from this site.  I added shells molded from candy melts. Other decorations include rock candy (blue and purple) and candy rocks.

This Finding Nemo cake was designed for a little girl who loved Nemo but wanted it more on the girly side. I started with a 12″ round and a 6″ round. I iced it with teal blue and then sprayed the bottom of each part of the finding Nemo cakes with the Wilton blue spray to resemble waves.

I then added green seaweed with purple tip #16 hearts to resemble underwater life in an orderly and maintained way. I then used the seashell mold with white chocolate tinted to the colors I liked and then dusted with pearl dust to give it that nice luster. I made the characters out of fondant and finished it off with a tip #10 dot border.

Finding Nemo cakes are actually pretty easy if you have the characters made prior to decorating. The molds only take about 15 minutes to form. I would say overall this is a reasonably easy cake to make.

Connor loves the movie Finding Nemo, so I thought I’d make him a cake. I saw a few Finding Nemo cakes on this website and wanted to do one similar but still a bit different.

It was a hit with all his young friends and he loved having a 3 round cake (which meant I could pull it apart and had heaps for all to have).

It was a chocolate cake, with butter icing. My mum made the shells you see around the side. I added the little Nemo fish on the top for the final touch. I also added ‘happy first birthday’ in letter lollies which was good as well.

I made this Finding Nemo cake for a joint father-son birthday. Nicholas turned 2 and just loved watching Nemo and feeding the fish in his fish tank.

This is a basic 10″ round cake. I added Nemo and Dory (I know that they don’t actually appear together much in the movie, but they were Nicky’s favorites) that I had sculpted from fondant (yes, it took forever).

The bubbles were also fondant and the writing was one of those edible markers.

I used rock candy as coral and added seaweed made with a standard leaf tip. I don’t know what that purple stuff is called but it looks cool. I also added a shell trim using the tip that actually looks like seashells.

Cake by Kara B., Ontario, Canada

I used a combination of a couple of finding nemo cakes I already saw on this site. Thanks for the great ideas. I didn’t think I did a very good job but the people at my niece’s birthday party really seemed to like it. Thanks again.

This was a fun Finding Nemo cake to make.

I cut out Nemo and Dory and laid them on the icing. I then traced them with white icing and took off the traced paper and filled them in with the colored frosting. I also used the blue food color spray for the background, a very little to give it that underwater feel! One of my favorite cakes!

I created this Finding Nemo cake using a bit of my own creativity and one that I had seen on the internet. I actually made two of these cakes for my twin girls’ 3rd birthday. The cakes are very similar except for the Finding Nemo figurines on top of the cake.

The cake was made from scratch using a basic butter cake recipe. I made four nine inch round cakes (I had to make one for each child). The frosting was a butter cream recipe. I used the Wilton color paste to color the frosting the different colors.

To assemble the cakes, I put a layer of blue frosting on top of the bottom cake and then laid the second cake on top. Then you frost the cake with the rest of the blue frosting. The seaweed and the shell border around the outer part of the cake was made by using different decorating tips with the different colors of frosting.

For the finishing touch, I added the Finding Nemo figurines to the top of the cake.

I had a lot of fun making this Finding Nemo cake and it wasn’t that hard. My two girls enjoyed the cakes and everybody that was at the party raved about the cakes. They couldn’t believe that I had made them. They all thought I had gotten them from a bakery.

Finding Nemo was the perfect theme for my little boy’s second birthday. Finding Nemo was the only movie he would really sit and watch so I knew he would love a Finding Nemo cake. I baked two classic yellow cakes in a 2 inch 10×15 pan. It holds two boxes just perfectly. I used a buttercream frosting tinted to a light shade of blue as the background color.

My husband used a Nemo plate to look at as he lightly drew on the cake with a toothpick. I then piped in black and filled in the orange and black with a star tip. I used the writing tip to make the little air bubbles around the top. I experimented with different tips to get the seaweed look with purple and green. The shells are sugar shells I purchased at a local cake shop. I used graham cracker crumbs around the bottom of the Finding Nemo cake to resemble sand. He loved it!

My daughter really loves Finding Nemo. As much as I wanted to have some sort of really girlie party for her, I went ahead and made it a Nemo Party. For this Finding Nemo cake I used two round cake pans, one smaller than the other. It looks like three layers, but the top is actually the top to a Finding Nemo Sports cup. It was the best cake topper I could find.

I frosted the whole Finding Nemo cake blue, and then used two different shades of green and a leaf tip to make the seaweed. The rocks at the bottom are actually chocolates, sort of like M&Ms. I used sour gummy fish around the cake, and rock candy at the top as coral. Our Finding Nemo cake made a big splash!