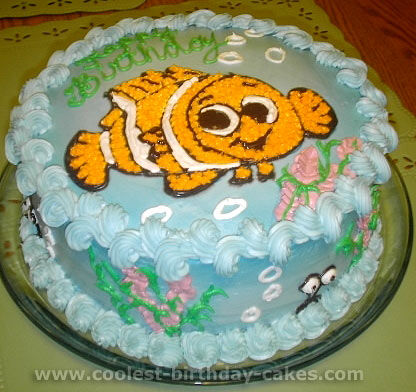 I got a lot of inspiration for this cake from Finding Nemo picture cakes I saw on the web. Make two 10″ cake layers. I used 1 cake mix per layer. This gives a nice high-layered cake. I used a basic butter-cream frosting recipe. I made the background a darker aqua than the light blue piping around the bottom and top.

I found a Finding Nemo picture from a storybook and drew the Finding Nemo picture with a toothpick first. Then piped chilled hot fudge for the black outlines (I find that using hot fudge topping does not “bleed” into lighter frostings). I filled the areas with a tiny star tip using the orange frosting and piped in the white frosting using a #3 tip. This same tip was used to make the eyeballs on the sides of the cake outlined again with the fudge topping.

I sporadically added the green seaweed using a #1 tip and using the leaf tip added the “coral”. I used the #22 tip for the edging on top and bottom, pale blue.

I looked in the internet for a cool Finding Nemo picture, because I wanted to make a very special cake for my daughter’s 2nd birthday. Then I found this Finding Nemo cakes page, and I am very happy, because here in Austria, it’s not very common to make a theme cake.

Nevertheless, it was not a lot of work. I made a white sponge, 3 normal trays, and the 3rd I cut out the Nemo form, filled it with nougat-creme and put a fluffy icing with the different colors on it. I found the Nemo picture on the web and made it bigger with Photoshop. I cut it out and laid it on the sponge, made the black border, and filled it out.

When I didn’t know where I have to set the lines, I cut out details, like the eyes, or so on and put it on the sponge, and border again. I made the sand with cookies, and I bought the little sea animals in the supermarket. My daughter was very happy; she even talks about her Nemo cake nowadays! Greetings from Austria ! Silvia.

I made this cake for a friend’s daughter who insisted on having a Nemo cake. I used an 8-inch round, two 6-inch rounds and the Wilton ball cake pan. The fins, eyes and mouth are made out of fondant. My friend’s little girl absolutely loved it!!!

I made this Finding Nemo picture cake for my son’s 2nd birthday. I used the Wilton football cake for Nemo’s body and a very large rectangular cake pan for the “ocean”.

Outline the top in black, bottom fin and the tail. Outline in black one large stripe in the middle of the body, a smaller stripe towards the back of the body and one on the tail. Smooth the white icing in the spot for the eye. Outline the eye in black and add a black dot for the pulp.

I used tip #18. Pipe stars in white to fill in the stripes and orange stars to fill in the rest of the body. Then I piped a line with tip #18 in orange for the fins and tail. This was my second cake, and I think it turned out pretty well.

I made this Finding Nemo picture cake or my niece’s birthday. The Nemo fish is made from the 3D egg pan. The fins and coral are made from fondant. The seashells are made of chocolate. The Nemo Fish is put on a sheet cake, which is half chocolate half gold.

I actually used the ideas of the finding Nemo cakes I got from this site and embellished on it.

I purchased a blue colored foam board at a local craft store, sketched the layout and decorated the board. I covered it with saran wrap to keep the icing from being too messy and when I messed up it was easy to fix.

I baked the football cake the night before. The day of the party I iced the cake white and then positioned it on the board. I then did all the black lines around and on the cake.

I attached a giant marshmallow for the fish eye and added a dot of black for the pupil. The other cakes just used icing but the marshmallow gave a really cool 3D effect.

I then used all of the orange and white icing for the body and fins. One cake was not enough for my crowd so I also made cupcakes, iced them blue and topped with a molded white chocolate shell that I also did the night before. Molding was a lot easier than I thought and this was my first time so I would probably do it again.

I also bought some aquarium plants from Walmart for the fish cake to embellish and stuck them on the board with more blue icing and chocolate shells. It is hard to tell in the picture but the shells have an opaque shimmer dust on them that really made them pop at the party.

I also used mini marshmallows as a bubble effect out of Nemo’s mouth. For the candle I anchored it to the board with a cupcake and a couple of strategically placed shells. I placed the goody bags/buckets for the kids around the cake. They were tied up in blue cellophane and it really made the table festive.

This was my first homemade cake like this and I really had fun. It was not too much work and I will probably do it again. So if you are a first timer or leery of taking on this kind of a project… Just try it once.

I used two boxed cakes of chocolate cake in 10-inch rounds. It was two layers with homemade cannoli cream filling. I used two rounds for the body and I traced the pattern of the round and cut the fins from the last two rounds.

I used a Wilton ‘s small star tip to frost the cake with store bought frosting colored with Wilton ‘s icing colors. The eye was molding chocolates melted – vanilla for the whites, piped in a ring and filled with dark chocolate. When dry flip over the eye and use the flat side up.

I enlarged a photocopy Finding Nemo picture from a book to A4 size. I then cut the wee fish out and used it as a template on top of a rectangular sponge cake.

I used butter icing and 1st covered it all in orange and then let stand in fridge to harden. I then put on the white and piped the black surrounds. Euan was delighted with his Finding Nemo picture cake for his 2nd birthday.

I had read that you could use a football pan to make a Finding Nemo picture cake, but I didn’t have one so I baked a slab cake and then cut the corners off to make it the right shape.

This cake was a big hit. It was a chocolate cake with a mousse filling. I did enlarge a Finding Nemo Picture I found on the Web and cut the cake according to the Finding Nemo picture for the shape. The icing was all buttercream!

I used a square pan to make the fish tank and had the figures that we had collected. Nemo was made with a football pan and then placed on top. I drew the lines and the tail with piping gel and filled it in using the star tip.

The water color was made with some blue and green coloring and took a lot of color to get it right. I would use less next time. It turned everyone’s teeth green.

Cake by Susan B., Woonsocket, RI

I found a Finding Nemo picture and cut it out, placed it on my 9×13 cake and used a toothpick to prick holes around the picture to get the shape of Nemo. I then used the orange frosting to cover that shape. Then I used blue with a hint of green for the background/water. I used a toothpick to show myself where I was going to put the white stripes and tried to carve away some of the orange frosting. I used a cake decorating tip to do the white stripes and eyes. It’s easier since it’s a fairly narrow area.

I dipped my frosting knife in a glass of milk to smooth out the frosting. Then I used bought black gel frosting for the outlines. I used my handy toothpick again to draw little lines on Nemo’s fins to give it a little more dimension.

Lastly, I used a star tip decorating tip to give the cake the white edging. It came out to be one of the coolest Finding Nemo picture cakes.