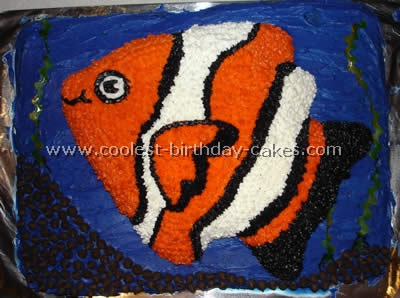 My son loves Nemo so I thought why not make him a Nemo cake? I used a mold for the shape of the fish and baked two cake mixes in it. I made butter cream icing and colored it with professional food colors. The professional colors gave me the bright vivid colors I needed.

I used a pipette and hand decorated the fish. I just smoothed blue butter cream icing on an 11×15 sheet cake for the ocean. I used milk chocolate morsels to give the ocean floor effect, fruit by the foot for seaweed and finally sugar glitter for the ocean “sparkles”. It was a hit and my son loved it! Good Luck and happy Birthday!

I enlarged the Nemo that my daughter selected for her Nemo cake and then cut around it on a vanilla sponge. I then simply had cream icing with orange food colour and white icing and colored in. The black is a gel icing purchased from our local cake shop. I placed it on a blue plastic sheet that had an ocean theme and placed some sharks, whales and sea horses around the edge. My daughter loved it.

For my son’s fifth birthday we had a Finding Nemo birthday party. He wanted a Nemo cake for his party. To make this cake I used an egg shaped cake pan. I used a confetti type cake mix and baked according to package direction.

After the cake cooled I placed the cake on a flat baking sheet, positioning so I could pipe the fins on the baking sheet. I outlined where I thought the stripes should go on the cake using black gel icing. I filled in the front, middle and back of the cake with orange icing using a star tip. I filled in the remaining two stripes with white icing using a star tip. I then used the white icing to make an eye and filled it in with the black gel.

Next I “drew” the fins and tail on the cookie sheet with black gel icing and filled in accordingly with the orange and white icing. Finally I made the side fin by using orange icing and the star tip and dragging it to make a fin shape (about three times).I then tipped the fin with black gel icing. My son loved it.

This is my original Nemo cake design. The base is a large sheet cake (13″ x 18″) made of two cake mixes (in this case devils food on one side and yellow on the other for variety.) I completely frosted the bottom cake first with homemade buttercream frosting. The sides are royal blue; the top is an aqua color then I ‘blended’ the two with food color spray to give a multi-colored ocean water-type look.

The Nemo on top is a separate (white recipe) cake that I baked in a Wilton Lady Bug pan (to not waste too much cake and to get a basic rounded shape, the football pan was too “pointy!”). I took a Nemo photo (specifically off one of our party hats to get the right pose), scanned it and enlarged it and printed it out on an 8 1/2 x 11 sheet of paper. I merely placed it on top of the cooled cake and carved around it. (In hindsight I recommend freezing the cake after carving it to minimize crumbs. Also ice sides smooth with orange frosting before placing on top of base sheet cake.) Your hands get gooey but it allows for fewer frosting smudges on your finished base. I very carefully put the plain Nemo cake on top of the base.

The eyes are fondant painted with Wilton food color. The orange (tip #16) black and white stripes (tip #4) are all free-hand done in buttercream frosting. I bordered the base and top with #18 tip and a blend of royal blue, white and lavender frostings in a decorator bag to give a wave effect. The coral and sea grass are all frosting with tips #4 and 10 and the leaf tip done free hand. Dori is a plastic prop. The bubbles are deco candies.

Cake by Kristin S., Albany, OR

I started with a 9×13 cake and after enlarging the image from the Mylar balloon I cut it out and laid it on top of the cake to form a Nemo cake. Then with a toothpick I outlined Nemo. Because her birthday is in October I was able to purchase a package of M&M’s that were only Black & Orange. For the white I used mini marshmallows that I cut so they would have a flat side.

Once I was ready to start placing the M&Ms I cut sections off of the paper outline where each color was. For example I first cut off the tail and placed the M&M’s in the section that would be orange. Then I would cut where the black stripe went and place the black M&Ms and so on.

It was a challenge to make this Nemo cake but a TON of fun and the look on my niece’s face when she saw the cake was payment enough.

My husband’s friend’s son is having his 1st birthday party and he absolutely loves Finding Nemo so his mommy and daddy asked us to make a Nemo cake for them. My husband sculpted the cake and I decorated it…no pre made stuff was used and no templates.

For this Nemo cake you will need two round cakes. Slice 1/3 off sides. Stick two sides together with icing and stand on their cut side. Use the remaining 1/3 to cut into fins and a tail. Ice the cake in Nemo colors.

I made four round cakes and stacked two of them on top of each other for the main body of the Nemo cake. The other two I put together and then cut into the shapes that I wanted for the top fin and two side fins.

I also made cupcakes and used two of them for the bottom fins of the fish. I bought already made black icing and then I tinted the other icing with Wilton orange tint. I used the rest of my cupcakes to spell out Happy Birthday Ava for my daughter’s 2nd birthday and she still talks about her mommy making her cake.

I made this Nemo cake for my nephews 2nd birthday in March of 2006. I knew he was having a Nemo birthday and just gave it a try. The icing is decorating quality fondant.

My grandson wanted a Nemo cake for his birthday. I used a metal mixing bowl for the main body. I used sugar cookies to cut the fins and fondant (orange colored) to cover the cake.

I decorated the Nemo cake with piped icing. I put it on a board with tissue paper, water and shells. Major hit!

After browsing all the photos on this site I decided to try my own Nemo for my son’s first birthday. I made 2 rectangular cakes and a third using the football cake pan. I covered the 2 rectangular cakes with icing and marbled marshmallow fondant (quite fun to play with). I placed Nemo’s body in the middle and drew freehand with my icing bag to create his fins & stripes. The sand is just graham crackers.