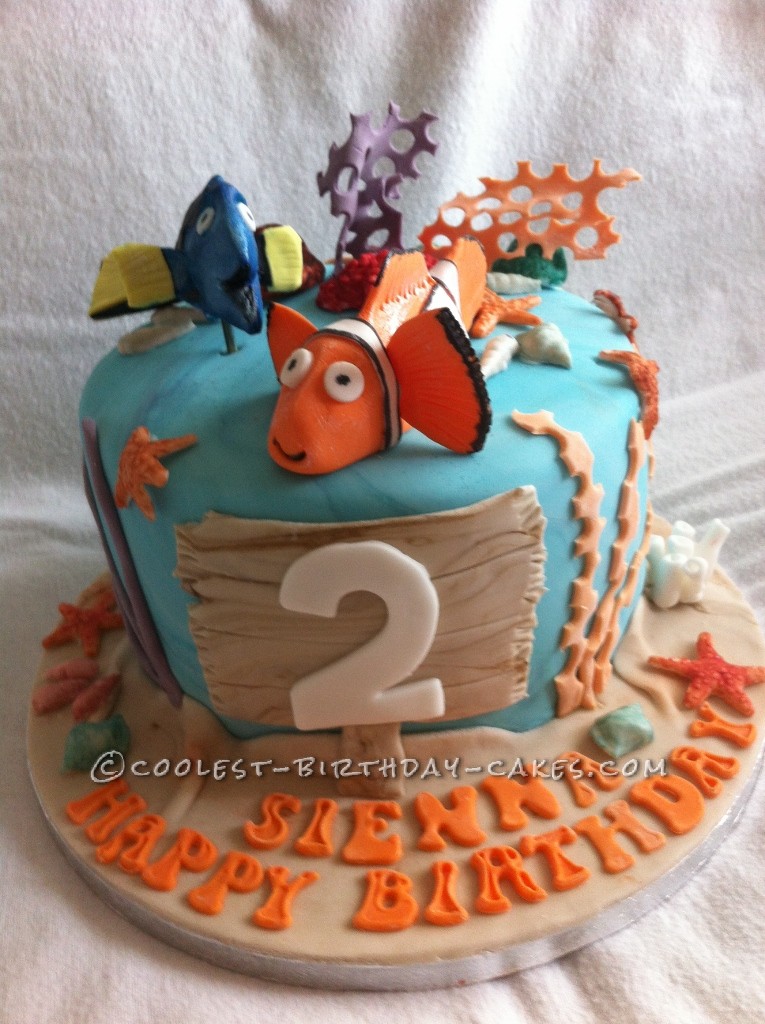 I made this Finding Nemo birthday cake for my hairdresser for her granddaughter, she said she loved Nemo the film and decided this was what she wanted. Before baking the cake I needed to make the decorations so they dried out.

I started by making the body of the fish. I colored one piece of icing in orange for the Nemo fish and then shaped it in the shape of Nemo and set this aside to dry out. I then made the fins and set these aside too. These were to be attached when the fish dried out.

I then colored some icing in blue to make the other fish, this fish is a thin fish. I made the fish’s tail curving round to give it some shape when placed on the cake, so I had to model this while on a stick. Both the fish were made out of 1/2 flower paste 1/2 roll out icing so they would harden. The following day the fish were ready to finish off.

I attached strips of white icing around the body and then edged them in black using a black food color pen and then I attached the fins using a little royal icing. I then dusted it with shimmer powder.

I colored some icing in black and then cut out the pattern for the side of the fish and attached it with a little water. I then colored some icing in yellow and attached it to both sides of the tail and both fins. I then colored the inside of the mouth in black then with a little royal icing I attached the fins. Using 1/2 flower paste and 1/2 roll out icing I began to make the rocks, shells, starfish and coral and left these to harden before coloring.

I made the seaweed for the top of the cake in purple and orange and made some in yellow for the side of the cake. I made this by rolling out an oblong shape of icing thinly and cutting out circles with the back of a icing tube. I then ruffled it and placed on uneven paper to dry. I used 1/2 and 1/2 in the icing as I did for the shells but added the color first.

It was now time to bake the cake. I baked a vanilla 3 layer round sponge cake and when cold I filled with jam and butter cream and then I covered the whole cake in butter cream and chilled in the freezer for 10 minutes. Meanwhile I colored some icing in bright blue and the I added some white icing and with food coloring I blobbed a few blobs of green and dark blue and mixed together until it was the desired pattern I wanted. I then rolled it out to cover the cake. The cake was then set aside to harden slightly. Meanwhile I colored enough white roll out icing in a sand color to go around the edge of the board. I stuck this to the board using a little water, and ruffled it in places like the sand had drifted up the cake.

Now I started to attach the decorations to the cake using some royal icing. I then cut out all the wording using flower paste which I had colored in orange and attached this to the board.

This was my first Nemo cake and I was really pleased with the end result. 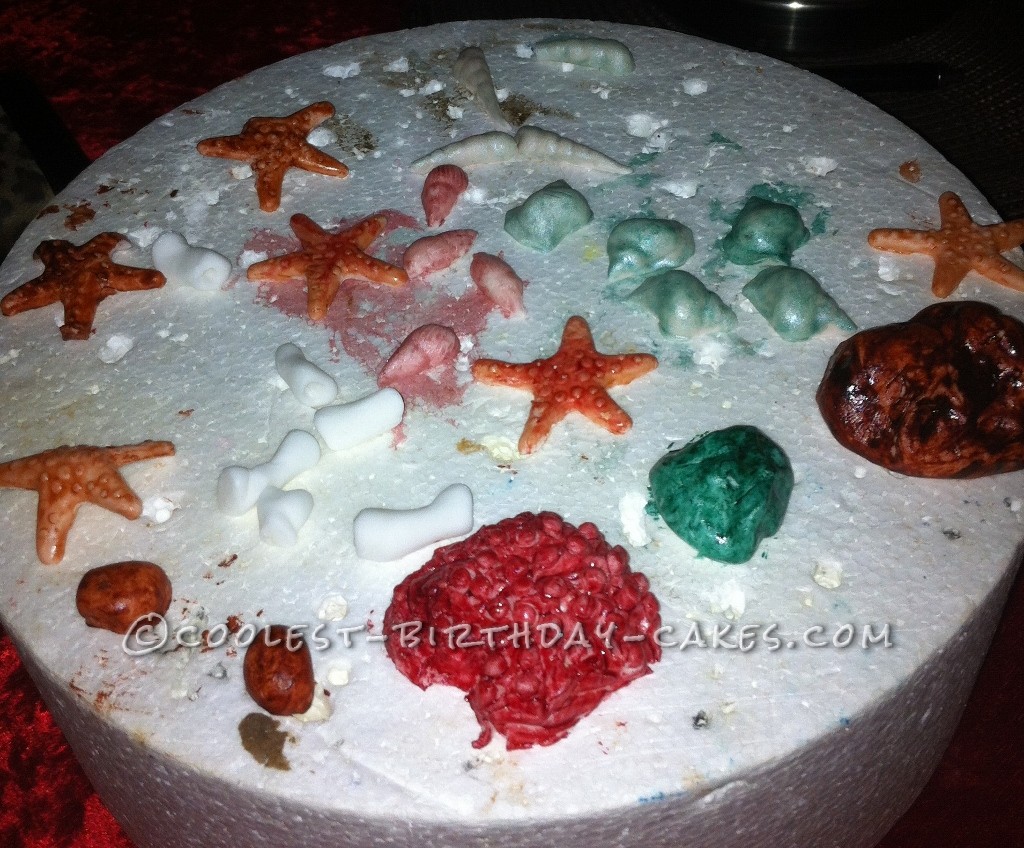 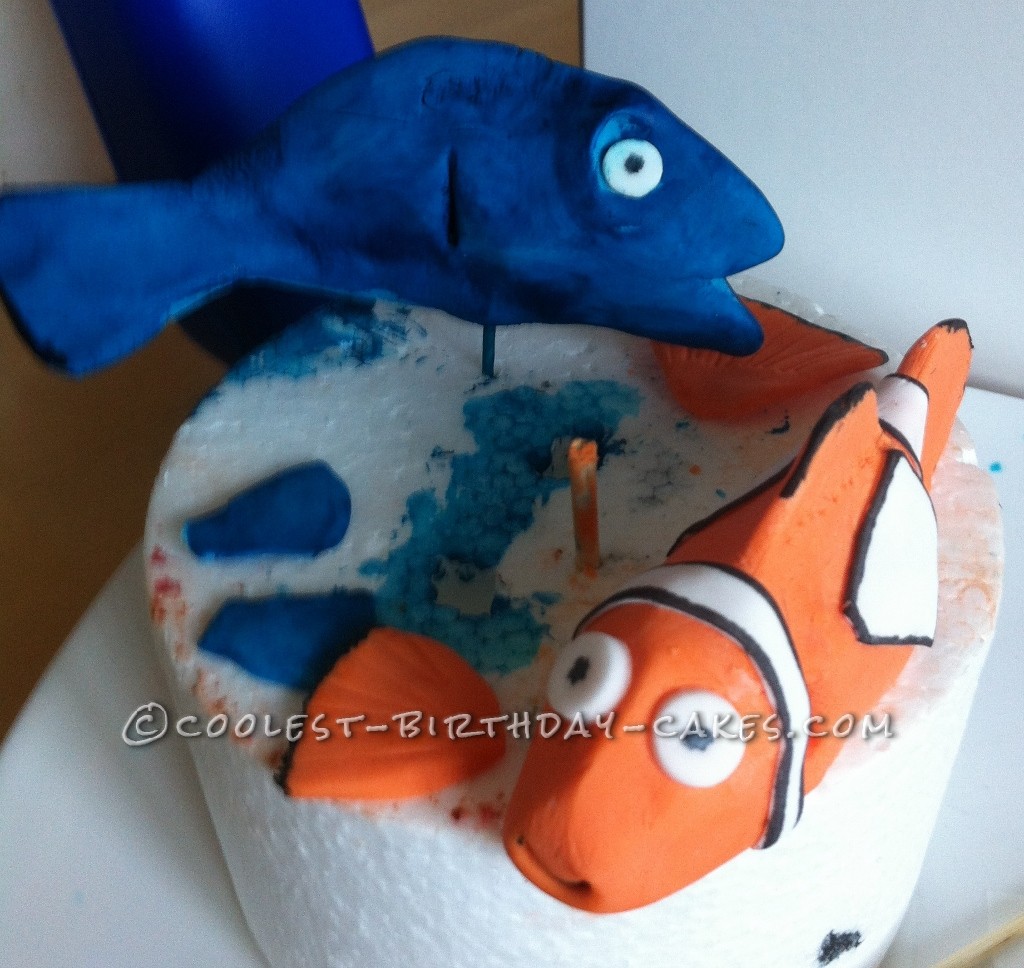 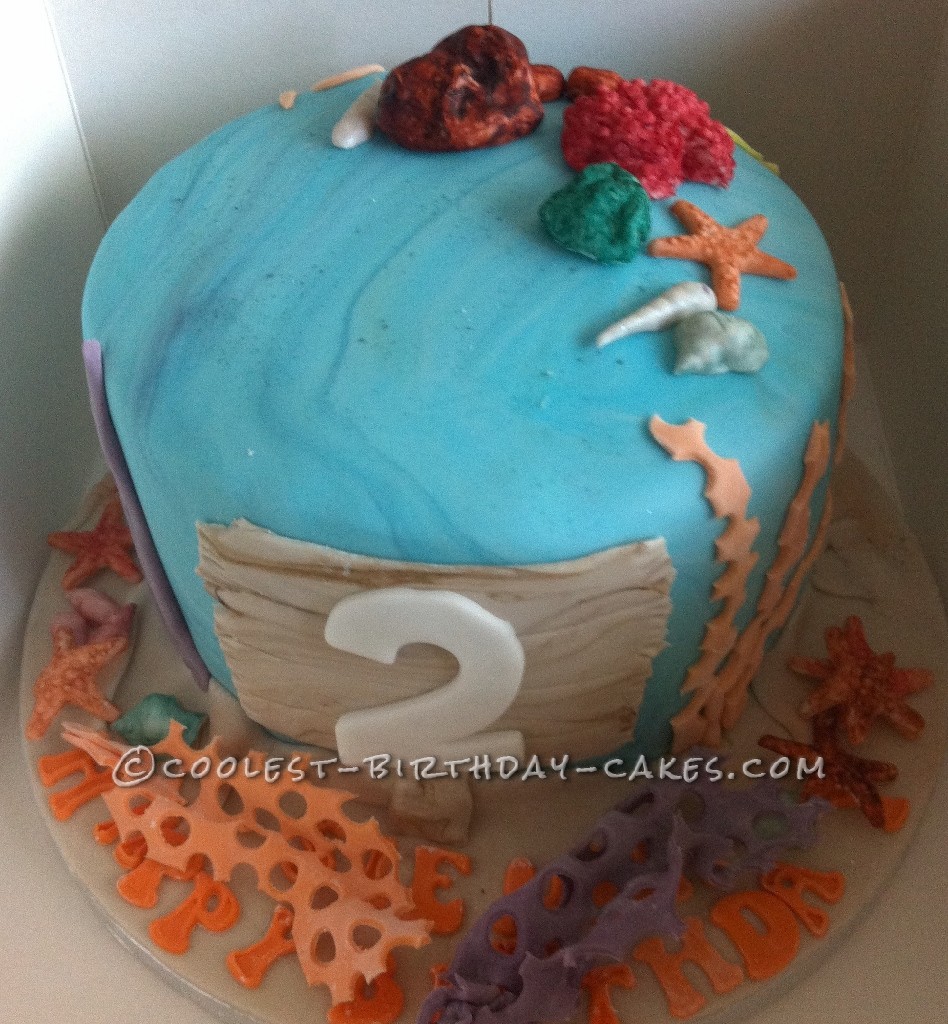 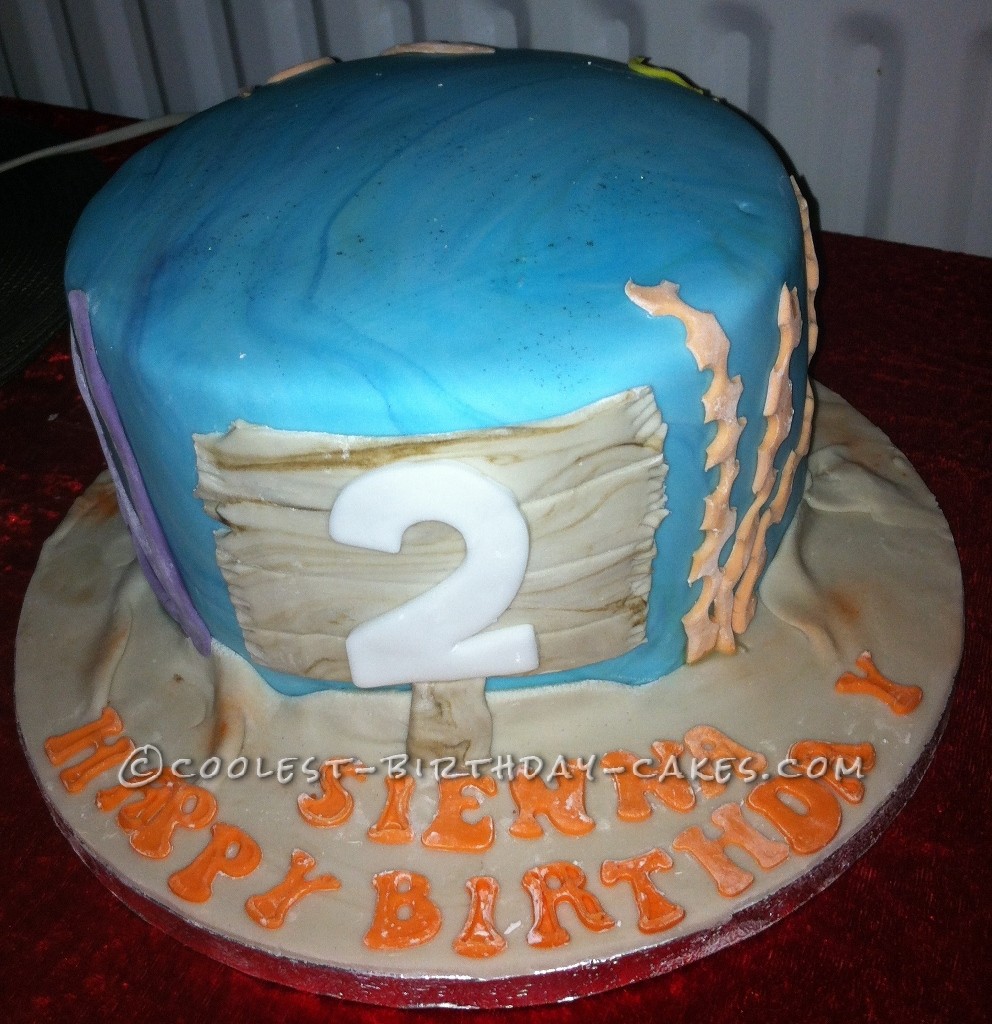 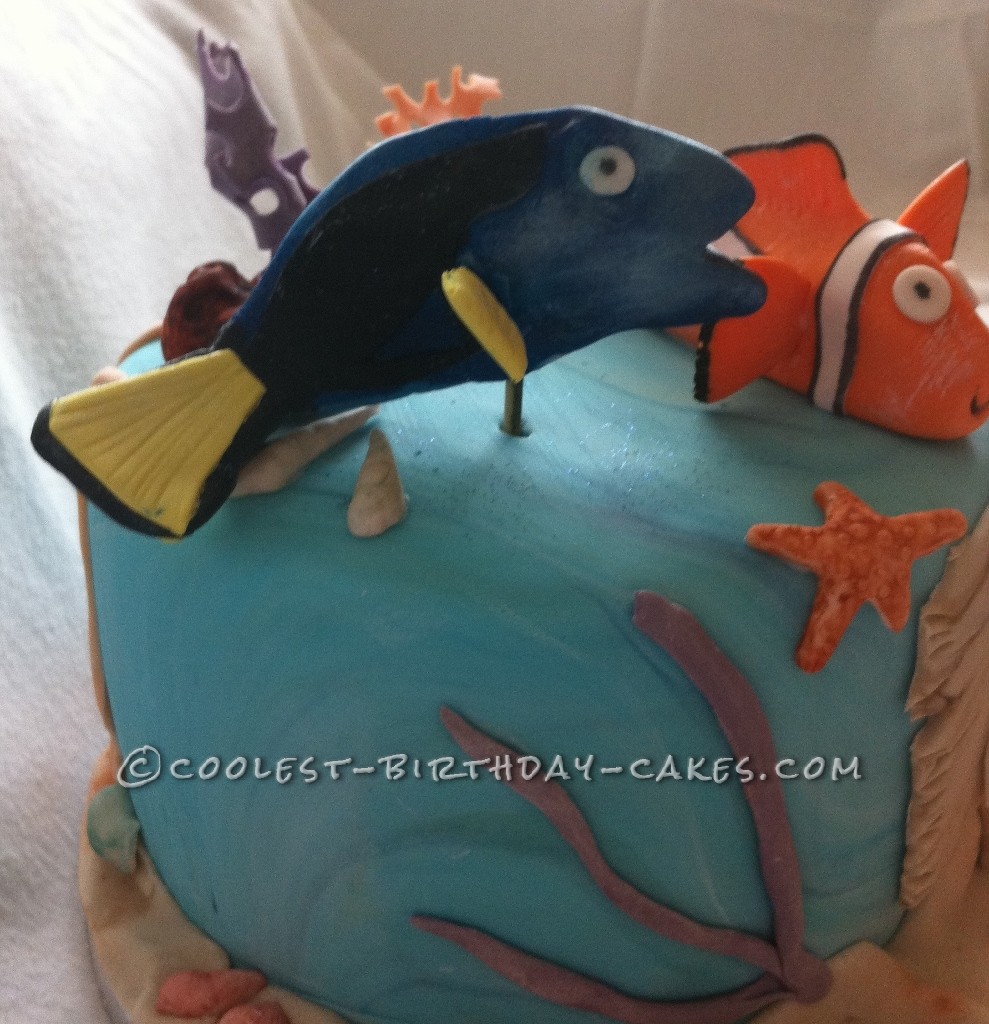