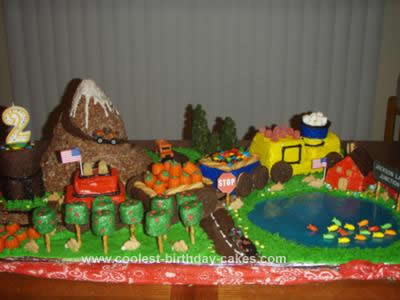 I wanted to make a Homemade Choo Choo Train Birthday Cake for my grandson’s second birthday but I also wanted to add some of his other favorite things. I started by covering two foam filled poster boards with foil wrap for the base and marked off the train track and road.

The mountain, apple trees, lake and bunnies were all made ahead of time. The only non edible items are the motorcycle, jeeps, flags and signs. I baked three cake mixes one in a sheet pan and the other two divided between two loaf pans and three soup and tomato sauce cans. Once the cake has cooled, remove the bottom of the can and push the cake out. After shaping the cake pieces they were frosted with a thin white frosting to seal in the crumbs and allowed to dry before applying the colored frosting, chocolate and decorations. A piece of cardboard cut slightly smaller than the cake and covered in foil went under each cake piece. This made it easier to place the cakes on the board after they were frosted. Candy decorations and cookie wheels were attached after placing the cake on the board.

Mountain: The Mountain is made from a double batch of chocolate marshmallow crispy treats. I molded the base of the mountain in a wide rim bowl than chilled until it was set, about 15 minutes, before removing the bowl and turning the base upside down. The rest of the treat mixture was still soft enough to shape by hand; the mountain was than chilled until set. The road was carved out with a knife; melted milk chocolate was used to pave the road. I pressed the jeep into the chocolate before it hardened. Thin white icing was drizzled over the top for snow.

Apple Trees:I pressed pretzels into marshmallow for the tree trunk. Working with a small bowl of water lightly dampen the marshmallow than roll in green sugar, let dry completely. I used red icing to dot on the apples after they were upright on the board. A few apple drips on the ground completed the orchid look.

Bunnies: I used purchased bunny shaped cookies with pink icing added on the ear and nose than put a dab of softened marshmallow on the tail and dipped it in white sugar.

Pine Trees: I used waffle cones cut to different heights applied green frosting with a star shaped tip in an upward motion. The tops of the trees were frosted after placing them on the board.

Red House: The house is cut from about a third of a loaf cake with the roof angled off. The roof is frosted with melted chocolate. The windows are cut from yellow gum drops and the door and chimney are mini graham crackers.

Water Tower: The water tower is a cake baked in a soup can than frosted with melted chocolate the legs are piped on with black frosting.

Train Engine: The engine is cut from a loaf pan cake with a half of round can cake, flat side down placed on the front and topped with an ice cream cone filled with mini marshmallows for the smoke stack. I shortened the cone by cutting off the bottom. Gum drops were used for lights.

Train Cars: Each car is cut from a piece of sheet cake and frosted in different colors. The cars have twisted pretzels for railing and to help hold the goodies on top of the cars. Chocolate sandwich cookies were used for the wheels. The caboose is two layers of cake with gum drops for tail lights.

Signs: The signs are pictures covered with clear tape on both sides than attached to pretzels with melted chocolate.

Lake: I used a popcorn ball recipe and cooked the sugar mix until it reached the ?hard ball? stage. I added blue coloring and poured it on foil paper in the shape of a lake. Candy fish were added before it was completely hard.

The Board: I started by placing the mountain in the corner than spread melted chocolate around the base and added more chocolate cereal as needed to fill in any gaps. The train tracks were iced with thin white frosting and covered with chocolate cereal. The track is piped on with black icing and slices of chocolate covered peanut butter wafer cookies. The road is melted chocolate and white icing center line. I spread thin green icing over all the grass areas to cover the foil board before topping it with grass by using a “hair” tip. I used a screwdriver to poke holes in the foam board for the pretzel trees and sign post to fit into. Tiny candy flower were added along the road and around the house. The grass was filled in after all the items were placed on the board to help hold them in place. 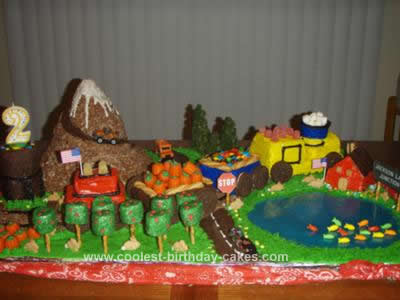 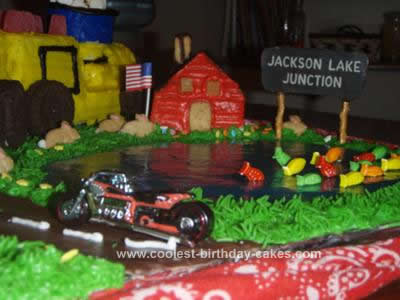