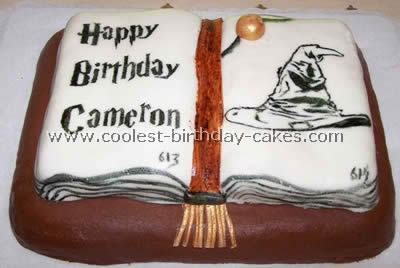 My son wanted a Harry Potter Literary Theme for his 7th birthday this year. I have always enjoyed making his cakes for his parties. We decided to make the cake look like one of the HP books. I used a Wilton book pan and a 9X14 pan. This is essentially two cakes, one topping the other.

For the Harry Potter cakes I used two boxes of FunFetti cake mix (my son’s favorite!) but I like to add one tsp. of Vanilla Butter Nut flavoring to the mix. I used approx. 2/3 box of mix for the “Book” pans and one and 1/3 boxes for the 9X14 pan and baked according to package directions.

I removed the “Books” from the oven approx sevens minutes prior to the 9X14 pan. I removed the cakes from the pans and cooled them on a sprayed baking rack. This year I decided to try making a Marshmallow Fondant for the cake icing – I found several easy recipes by doing a search on Google. Since this was the first time trying out fondant I prepared it a few days prior to making the cake and it turned out beautifully and stored in the refrigerator until I was ready to make the cake.

During my internet search I also discovered the faux fondant technique and decided to give this a try for the base of the cake. I prepared a basic “crusting” buttercream recipe (can be found via Google search as well) and reserved approximately one cup (white) to frost the books. I then added 2/3 cups of cocoa powder and three tablespoons of water and three tablespoons of softened butter to the recipe to make chocolate buttercream for the base.

For the base apply a very heavy coat of the chocolate buttercream to the 9X14 cake. Allow to crust – about 10 minutes. Then lay a viva paper towel on top of the icing cake and begin smoothing the frosting with the palm of your hand – I used this technique for the top and the edges trying to make them rounded. For the sides I used sheet of card stock and had better success getting the sides smooth and the bottom edge straight.

For the “Book” I placed each cake on a sheet of wax paper coated with powdered sugar – so that I could move the cakes easily when done. I put a crumb coat of the reserved buttercream on each cake and set aside. I placed my refrigerated marshmallow fondant in the microwave for 25 seconds to soften and then cut in half. I rolled out 1/2 the fondant on a silpat to the thickness of a pie crust and carefully lifted it to cover the first half of the book. I pressed the fondant to the cake and began smoothing across the top and sides then using a pizza cutter I cut the fondant at an angle to the bottom of the cake. I set aside the cut fondant for later use.

I then repeated this for the cake icing of the second book half. For the decorations: I downloaded the Harry Potter font and printed out my birthday message onto card stock. Then I cut out the letters using a razor blade box cutter. I did the same for the sorting hat image – cutting out only the main features of the sorting hat. This was done in advance as well. Using edible cake paint I sponge painted the images onto the fondant covered books using the card stock cut outs as a stencil. I used a fine paintbrush to fill in the missing parts of the sorting hat and to paint the pages numbers and the page outlines along the edges. I used some of the rolled scraps of the fondant to make the book mark and painted this as well with the edible paints and gold dusting powder. I rolled some of the fondant into a ball and cut off the back to make the golden snitch and dusted this with edible gold dusting powder as well.

All of my guests loved the way that this cake came and said it was one of the coolest Harry Potter cakes they’ve ever seen. My mom suggested that I submit it.

I made this cake for my best friend’s two little boys and their Harry Potter themed joint birthday party. I searched for Harry Potter cakes but in the end made this monster book. I used two cakes, one 15 x 11 1/2 sheet cake for the monster book and formed open book pan the same size. I used fondant to cover both books and butter cream frosting to crumb coat and fill between the two cakes.

This cake took me almost a full day to decorate and paint. Two days prior I baked the cakes and the day prior crumb coated the cakes which I prefer to do even when I use fondant. We named the open book “book of wishes” instead of “book of spells” as the family had a few relatives whom for religious reasons did not approve anything regarding witchcraft.

The boys, their mom and I created a spell from a Harry Potter website which offered a spell making program which was similar to mad libs. They had fun, they were able to watch me paint their “spell” / “wish” on the right side of the cake. Everyone loved the Harry Potter cakes – the adults loved the butter cream frosting and dug into the extra chocolate and vanilla butter cream that I brought.

This was one of my favorite and craziest cakes that I have made yet!

Thanks for all the cool Harry Potter cakes on this site.