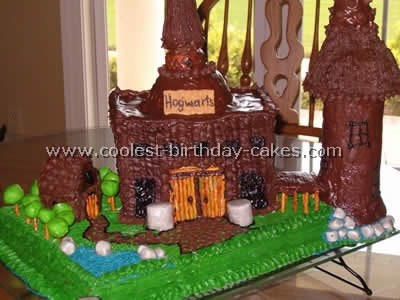 I was 12 when I made this Harry Potter cake for my neighbor’s birthday (Summer 2007). I had just finished reading the last Harry Potter book which inspired me. I baked a basic yellow sheet cake in an 11 x 13 cake pan.

I made the schoolhouse out of graham crackers using melted chocolate chips in a pastry bag to attach walls. Rooftops are ice cream cones and waffle bowls. Marshmallows with corn syrup and grey tinted frosting look like large rocks chocolate chips for brick walking trail and pretzels topped with green tinted fondant for trees.

The cylinder is not eatable. I used a Pringles can with chocolate frosting and an ice-cream cone on top. My neighbor who turned 10 and his little friends were blown away by this Harry Potter cake.

Cake by Alicia M., Mission, BC

I was inspired again by this website. I saw the Harry Potter cake and my son loved it so I put my own spin on it. This cake takes two and a half cake mixes.

First cake was made from a cheesecake pan then I made 2 8′ round pans and added them on top, layering them and cutting off the difference. Finally I took a small banana loaf pan with half the cake mix and the cheesecake pan with the rest. I cut the banana cake sized in half and saved it to put on top.

I decorated the Harry Potter cake with all black icing and added some baby cookies cut in half as window.The pillars are toilet paper rolls with construction paper wrapped around (I was going to cover in icing put I ran out of time) plus I didn’t want the kids to eat them.

I was asked to make Hogwarts Castle from Harry Potter. No mean feat! (especially as I hadn’t seen the film). This rather dark looking creation was adapted from Debbie Brown’s enchanted castle.

The castle is actually a deep purple colour and the turrets are made from solid fondant icing. Believe it or not I did not use black at all! I poked small holes in the sides of the castle and turrets with a plastic fork to make the windows and then piped in gold coloured royal icing.

I made a Hogwarts emblem to go over the door from royal icing, which is not in this picture, but it did finish it off.

It took a LONG time to create this Harry Potter cake, not for the faint hearted!

I made 2 round cake pans and a mixing bowl to make the 3 layers. I then iced it with Vanilla icing and colored with the blue gray color.

I used poster board towers and put them inside the cupcakes and sugar cones on top.

We had just bought Harry Potter Goblet of Fire the Movie We had a great time with the decorations.

I made this Harry Potter cake for my nieces 6th birthday, she is a major fan of the Harry Potter . I made a three-tiered cake and used paper towel and toilet paper rolls for the towers. I used gray butter cream and sprinkled it with white cake glitter. The cake was a hit, although difficult to transport.

Read Lydia’s “Party-Tale”: The story behind the cake…

My son was a huge Harry Potter fan about 2 years ago and wanted a Harry Potter cake. I decided to try my hand at a “Castle”. The columns are paper towel/toilet paper holders and the “points” are ice cream cones. Everything else is “cake”! It is a 3-tiered cake and I purchased Harry Potter figurines to go around it.

Made with the Wilton castle pan but decorated in the colors to resemble Hogwarts Castle. The sides were iced smooth in white and then the castle outline was done with a #3 round tip. The castle was then filled in with a #16 star tip and #2 & 5 round tips. The roof was made using the plain side of a #47 tip. Chocolate rock candy was added to the tray for decoration.