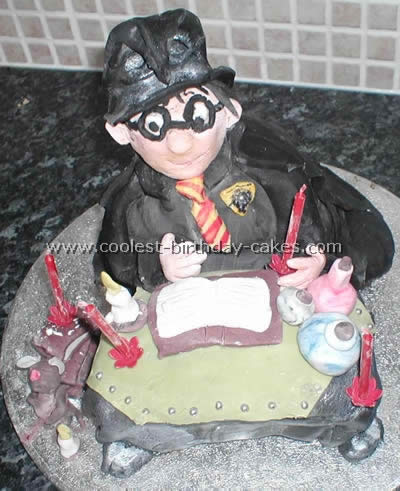 The ideas for this Harry Potter cake I adapted from a birthday cake book. Just quickly colored the ready made icing and chopped up a ready made cake. Quick idea for most busy mums. The kids loved it even if it isn’t perfect!

For my son’s sixth birthday cake he asked for a Harry Potter Cake. I simply made a sheet cake which I covered with white icing. Found a coloring page picture of Harry for a guide and hand piped on icing in the shape of his face. For a little dimension I used plastic Harry Potter glasses that you can find at any party store and cut off the arms of the glasses and stuck it into the cake. Yellow gel icing was used for the scar and then in Harry Potter font wrote out his name.

There is a Harry Potter movie and book coming out this month so my son wanted a marble cake with a Harry Potter character and decorations. After taking the Wilton’s Cake decorating course last winter I thought I could handle it. First I found a cake online that my son liked at. My son wanted the head and “sneach” to look different so I used her cake as a guide and drew it freehand with piping gel on parchment paper.

I pressed that onto the cake and found that I had too many lines – 2/3 of them blurred. So I drew it again right on the cake using the Wilton’s buttercream frosting recipe and number two and three tips. I tried black gel but that ran (check out his shoe). Since my son is a firecracker (5th of July) we used mostly red, white and blue along with the gold lettering. The lettering I found by searching similar clip art. It could have been better but it was midnight by the time I got to the lettering so I didn’t bother with a straight line.

The kids really liked this cake and the adults were impressed so I’m calling it a success.