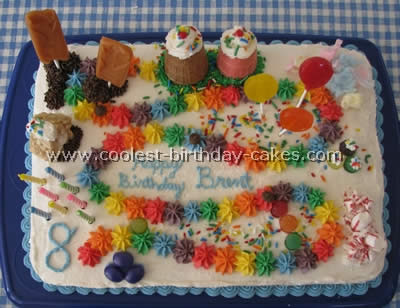 How to bake a cake for a Candyland theme? just use a simple chocolate 9 x 13″ cake iced with white buttercream icing. To make the Candyland path I used a toothpick to trace a single curvy path over the cake top. When the position of the path looked right I used the bottom of a tip (round end) to press light circles all along the path. I then used a large star tip to place the red stars, counting the necessary spaces between each star then added all the orange stars etc.

We chose purple jelly beans to represent the plum tree, gumdrops for the rainbow trail and gumdrop pass crushed and whole butter mint sticks for the peppermint forest, a little house made of peanut chews for the peanut brittle house (assemble this and allow to dry for several hours), lollipops for the lollipop forest, gumdrops topped with icing swirls and sprinkles for the gumdrop mountains, bits of cotton candy for the ice cream sea, chocolate icing topped with chocolate sprinkles and two mini Sugar Daddies for the molasses swamp and cut off colored ice cream cones topped with icing and sprinkles for the candy castle.

Most of the candy was saved and put on the cake just before the party as they would have become sticky after a while. My son was delighted with his Candyland cake and it turned out to be much easier then I had expected!

A friend showed me this idea of how to bake a cake to look like Candy Land. I made two cakes and put them together. Put icing and sprayed with green food coloring topped with all different types of candy, starburst lollipops, kisses, Reese’s peanut butter cups. It was lots of fun doing this with my daughter for my godsons first birthday.

I had no clue how to bake a cake so searched this site for a Candy Land cake. We prepared an 11×14 cake and frosted it with white frosting. We then put the candy on using the game board as a model. We used starbursts for the path, candy corn (instead of candy canes), gumdrop’s, pull-and-peel Twizzlers for the trees, a brownie covered in chocolate frosting for Gloppy, M&M’s, chocolate chips, rock candy, dum dums and ice cream cones topped with frosting for the castle. We filled in the bare spots with various colors of sprinkles.

We decorated the sides with cut up Swiss Cake Rolls. We wanted to label each of the areas like on the game board but didn’t have enough room to write it on the cake. It wasn’t until later we thought of writing the names on paper and wrapping each around a toothpick like a banner to label the areas.

You need two 13×9 baking pans. Spray with cooking spray. Prepare cake according to cake mix. Let cool. I used a 27x17in display board. Covered it with a tablecloth and then covered it with clear cellophane.

Put cooled cakes side by side on display board. Level the tops of cake. Ice the cake with white icing. Then use green decorating spray. After spraying top and sides of cake start decorating. Make a Candy land road by using a toothpick so it is an easy guide when placing the Starburst candies. I used conversation hearts for the first pathway. Then for the path I used red fruit roll-up and red coarse sugar and yellow dots. For the peppermint patch use clear rock candy (crush the rock candy if on a stick) peppermint sticks and star mints. For the gum drop patch I used eight large gumdrops. I put a toothpick in every two gumdrops so they don’t fall over. I also made a small patch of miniature marshmallows to cover some space on the cake (that is only if you want to).

For lollipop patch use some dum-dum lollipops. For the castle take three ice cream cones, cut the top off one (so they will be different heights) and fill the insides with icing then make a swirl on the tops. Sprinkle with colored sprinkles and top with a red dot (you could also use a toothpick to hold the cones in place because they are heavy and can topple over). Then for the chocolate forest get some Reese’s peanut butter cups and swirl chocolate frosting on the tops and sprinkle chocolate sprinkles on top.

To finish up the cake I used small gum drops to line the whole outside of the cake. Make an arrow with the chocolate frosting and spell START with white icing. I also used the real Candy land people on top of the starburst candies so it looked like we were playing a game. I also wrapped a few of the real cards from the game in cellophane and attached them on the display board around the cake.

I made this cake for my friends block party. It was a hit. I saw how to bake a cake in a magazine and fell in love with it.

Cake by Melissa B., Omaha, NE

For this Candy Land cake I used all ideas of how to bake a cake from the game board itself. I started by using a total of 6 cake mixes divided into 2-12×18 in. pans. I then put the cakes side by side on a cake board.

I used Wiltons butter cream recipe frosting to cover the cake and make all the colors shown in the cake; red yellow purple; blue orange and green; and chocolate frosting for the top left corner. I used whipped cream for the mountains and coconut for the snow in the right top corner. I used frosting for all the details and a large grass tip for grass areas.

Fresh candy from the store was used for each area, gumdrops, circus peanuts, licorice, peppermints and candy canes suckers, chocolate chips, M & Ms. The signs were made from cardboard cutouts.

I used happy birthday candles for the end of the road instead of king candy and used a few pieces of candy from each section of the cake. I used licorice for the bottom border. My son asked for a candy land cake this was my idea of how to bake a cake.

For my daughter Emma’s 4th B-day, she wanted a Candy Land cake. This cake was rather easy.

Approximately 4 days in advance I made the trees and house. For the trees I used an inverted sugar cone and used tip 16 with green frosting. We used sprinkles on the trees as well.

I made the house by “gluing” graham cracker halves together with royal frosting to form a square. I cut the graham crackers into triangles to form the roof. When the house was dry, we added Neckos for the roof and piped tip 16 on all sides – I let this dry for 2 days.

I made a 1/2 sheet cake and frosted it white (Everyone has their own techniques of how to bake a cake…). I added the house and trees. Then I prepared red, orange, yellow, blue, green, purple butter cream frosting. Using tip #47 (flat side up) I piped the rainbow path alternating the six colors.

I piped a scroll border around the entire cake top and bottom using tip #21 and added gumballs on each loop. I then added an assortment of candy to the cake, including: Texas jelly beans, dum-dum lollipops, gum drops, large marshmallow candy corn, peanut brittle, candy sticks, sprinkles, etc.

I made an 11×14 sheet cake and covered it in buttercream icing. I used the Candy Land game board for inspiration. I found different candies to accent each unique part of Candy Land (mints, licorice, gumdrops, marshmallow ice creams, circus peanuts, Hershey’s kisses, and M&Ms).

I used chocolate icing around Gloppy. I also found pictures on the Candy Land website of each character and laminated them. I stuck their pictures to toothpicks and put them around the cake. This is a great party theme with endless possibilities.

My daughter and guests had such a great time. You just need to know how to bake a cake, and all the rest of the decorating is easy.