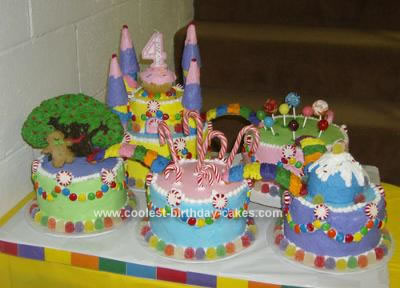 My daughter wanted a Candyland Birthday and this Candyland Cake was the essence of sweetness. I wanted the cake to stay true the game and yet wanted to simplify the process as much as possible. So I gave a detailed sketch of my idea to my mother, who turned it into an almost identical translation.

The bottom border of each cake is make of sugar gumdrops, the top is a white icing dot border. Swags of M&Ms go around the sides, peppermint disc accent at the top of each swag. The cakes are adorned with elements of each area in Candyland. The first cake Mama Gingertree (free-formed) and gingerbread boy (cutter) is made from sugar cookie dough, baked then iced. Toothpicks hold them in place. The five rainbow bridges are also cookies. To create the arch of the bridges, the cookies where baked over an aluminum foil mold, then iced to look like the squares on the game board.

The second cake is the Peppermint Forest, use different size candy canes with a little white icing at their bases to look like they are in the snow. The third cake is gumdrop mountain with a cupcake iced to look like a giant gumdrop use white icing to look like snow, a gumdrop on top and a few colored jimmies for whimsy.

The fourth cake is the Lollipop Woods and is made with dum-dum and lifesaver swirl suckers. The fifth cake is a two-tiered cake, using the last six-inch cake, the four-inch cake and cupcake. This cake is made to look like the candy castle. The turrets are made by icing plastic dowel supports and sugar ice cream cones. The tip of the cone is adorned with a red M&M to mimic a cherry on top. The cupcake is iced pink with some colored jimmies and topped with a number 4 candle. This sits on the four inch tier. M&Ms are put around the base of the cupcake for a border.

The four inch cake is decorated just like the sides of the six inch round cakes, except a small door is piped give the illusion of a castle door. All the cakes were put on individual cake circles, but they were all placed on a large rectangular cake board to transport. To add a little extra touch, the edge of the cake board is finished off with colored squares of construction paper double-side taped onto the side.

If you can ice a cake, you can make this one! Hardest part, the rainbow bridges (getting the arch correct). One tip: the peppermint candy has a tendency to run (the red color), so don’t put them on until last or even at the party if possible (just use icing like glue to adhere to the cake).