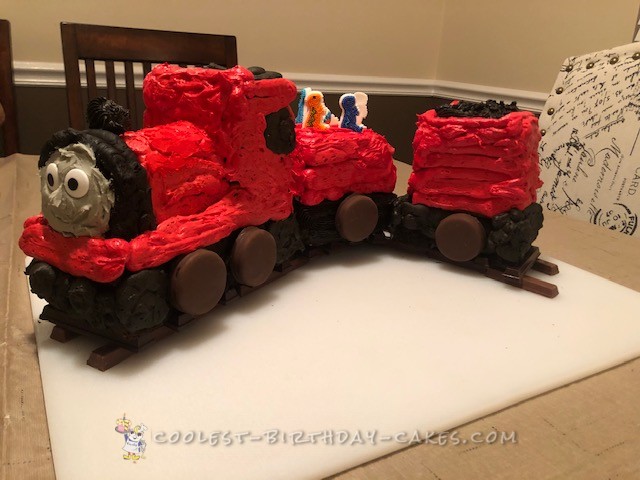 My almost 4 years old son had one cake idea in mind, a James the train cake! Not Thomas, not another train, it had to be James. It was difficult to find inspiration on the web, as most kids want a Thomas (I already did a Thomas for my oldest) and he wanted it “standing up”. So after looking at the real train and some pictures, I started, a week before the big day to bake 4 cakes, 2 chocolate and 2 vanilla (so it is for everyone’s taste). I needed at least 2 trailers because we were having a birthday party where 12 kids were invited (we ended up having 30 people and no cake left over).

I assembled the bottom part, added chocolate icing, added a layer, the cabin and the firebox. The chimney is held by a candy “drop”. I bought also a big red icing coloring box and made lots of vanilla icing (my fingers were red for about a week after that).

The rails are made with long kit-kat bars and small kit-kat bars (the middle of the track). The rails were everyone’s favorite! The weeks are oreo covered chocolate. The black icing is made with chocolate icing with black food coloring. I bought the eyes at Michaels and added some chocolate candy in one trailer and little candy dinosaurs in the other one.

I’ve never worked with so much icing and it was my first attempt at using coupler and icing bags.

I ended up taking the eyebrows out (because he looked too mean).

The cake was so big that it didn’t fit in any boxes that I had so we just covered him up loosely with aluminum fold for transportation. We were 10 minutes from the location of the party, but we tried to drive VERY SLOW because the icing between the parts made the train tilt a little bit. I was very nervous that the train would fall while turning in the car and that this week of work would be in vain. Next time, I need to stabilize it with something.

I brought some extra white icing in a tube and sure enough, I used it to “glue” some wheels back to the train.

Everyone enjoyed it (kids and parents) and even the staff complemented on the cake. 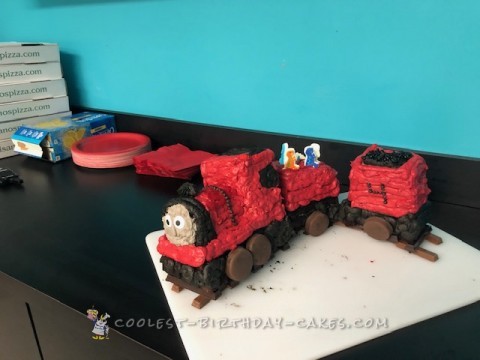