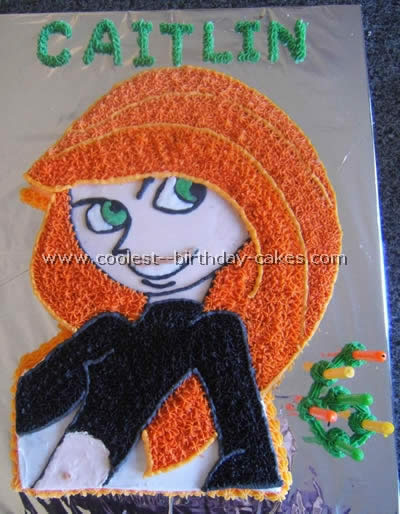 I made this Kim Possible cake for my niece for her sixth birthday. Kim Possible is fairly new to New Zealand so there is not a lot of Kim Possible stuff around. I found a clipart picture on the internet which I printed out then enlarged on the photocopier.

I made a large rectangle chocolate cake. I cut around the outline then I transferred the pattern with a skewer. I started by icing the face area first with smooth buttercream icing. I then placed the pattern back on top and the holes that I had previously made left marks on the face for the eyes and mouth. I covered the sides in dark orange around the hair area and white on the body area. I outlined the hair in light orange then filled in with dark orange stars.

I then outlined her top in gray followed by black stars. I finished off the face and then put light orange large stars around the base of the cake. My niece absolutely loved her cake along with everyone else at the party. It was a shame to cut it.

For my Kim Possible cake, I printed off a common clipart from the internet and cut it out as a guide. Using a 9×13 slab I traced around the template with a toothpick for an outline. I then cut out each section to trace (hair body) and then drew on the details freehand with the toothpick. This method worked well being sure to do it lightly to not pull too many crumbs from the cake.

I used icing mix and icing paste to colour it the different shades that I needed. I outlined the hair in yellow first and then did the grey outline. Then I went ahead and filled in each section. I did the black outlining at the end. I found that using stars was great for adding texture to the hair. For the rest of the cake I just used a round tip as it filled in faster.

The cake took about 1 1/2 hours to decorate because of changing colours so much.

To ice the cake I drew the Kim Possible face on some thin cardboard and then I cut the forms out and made stencils for each different color that I had to use. I placed the stencils on the cake using toothpicks to hold it still.

Cake by Rhonda B., Gaffney, SC

Looking at a Kim Possible picture from the internet, I drew Kim Possible on a piece of parchment paper to make her the size I needed. I cut the picture out and laid it on top of the cake (11×15 white cake).

I used a toothpick to trace around the edges of the picture, and then I cut the shape out with a knife. I frosted the whole cake white, using the wide edge tip to keep the cut edges from crumbling into the frosting.

Looking at the picture, I drew Kim with a toothpick in the frosting. I used black frosting to outline her face and body and light orange to outline her hair. I then filled in the outlines using a star tip. I completed the cake with shells around the bottom edge.

My daughter asked for a Kim Possible cake for her sixth birthday. It was pretty easy to make.

I found a picture of Kim that we both liked, and then enlarged it on a copy machine. I cut out the outline of the picture, and then traced the outline onto a 9×13 cake. I cut out the cake to be the shape of Kim Possible’s face. I then cut through the paper onto the cake for each part of her (hair, face, shirt) in order to figure out where to frost.

For her eyes and mouth, I melted white chocolate chips with food coloring and then I used black gel around them. It took about 1 hour to decorate after the cake was cooled.

I started with a rectangular cake. I printed the image off on the computer, and placed it on to the cake. I carved around the paper to shape the cake. Then, I iced the Kim Possible cake using butter cream icing.

My granddaughter begged me for a Kim Possible birthday party this year and unfortunately there doesn’t seem to be too much out there for cake decorating. So in the end she made me really use my imagination to accomplish this task.

I started by baking one round 16in. layer for the base. This was iced with buttercream icing in a neon green with yellow shell borders. The second layer was baked in the Wilton Flower Power cake pan. The flower was iced in purple and orange with a yellow center. The number 5 on the top was also baked in a Wilton pan from the numbers and letters sets.

This cake was iced in neon green, purple and orange. The characters on the cake are from a Kim Possible play set purchased from Disney Store online. And don’t forget Kim’s tag line, added to the bottom layer, “What’s The Stitch?”

The cake is actually very simple to make and is very large so will accommodate large parties. And as you can see it is very bright and festive for a birthday party. HINT: To keep the number on top from falling over use 2 thin dowel rods or skewers inserted through the 2 bottom cakes and half way up the number cake to anchor it.

I am a newbie at decorating and I made this Kim Possible cake for my daughter’s 5th birthday. My first stab at fondant – homemade butter cream rolled fondant, which was difficult to work with (considering the heat and size I had to roll out to cover the cake). The fondant didn’t taste great because of the dark purple color. The Kim Possible cake is an alternating 4 layer yellow and chocolate cake with Vienna cream filling.

For this cake, I started off with an enlarged image of a Kim Possible head (tracing over a Kim picture and photocopying/enlarging the outline).

I then piped over the outlines and filled with stars. I smoothed the stars on the face to give it a smooth texture. All in all, I don’t recommend the powdered sugar transfer method. The sugar quickly dissolved into the moist cake and disappeared.

Also, I used dark chocolate canned frosting (with extra powdered sugar to stiffen) as the base for the black. It meant using a lot less black food coloring. The rest of the frosting is homemade butter cream, which I find works best for me with decorating tips. The toughest part of this cake, actually, was mixing the colors. I wanted them to really match Kim Possible.

I made this Kim Possible cake for my daughter’s 5th birthday. This cake is a chocolate wacky cake (it uses vinegar instead of milk, which keeps it moist). The icing is a butter icing (because I don’t know any child who would eat fondant icing). I printed a picture of Kim Possible, and then I used it to cut the shape out. I then iced each section separately, followed by some “piping” work to add detail.