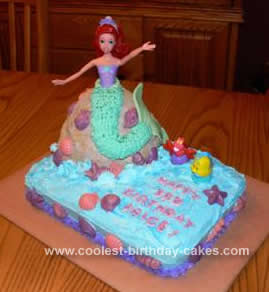 My daughter loves The Little Mermaid, and told me for 6 months prior to her birthday that she was going to get an Homemade Ariel Birthday Cake! No pressure! It actually turned out to be one of the easiest character cakes I’ve made so far.

I made a single layer of cake in a lasanga pan for the bottom, rented the barbie doll pan for the rock, and found an Ariel barbie. I wrapped her legs in Saran (it helped that she was a ballerina version with pointed toes), and stuck her in! Then, I iced the rock and added some brown sugar for sand. Next came the lightly mixed blue/white icing for the water. I kept it thick so I could make waves coming up on to the rock.

The shells are all made from wafer candies and made in a form from Michael’s. Super easy. I actually wrapped these up for take-home gifties for the guests as well. Yummy.

Ariel’s tail is made of fondant that I wrapped around another Ariel doll that has a mermaid tail. Then, once it had dried out a bit, I peeled it off, and toothpicked it to the rock. The details and the tail are also made from fondant. The flounder and Sebastien characters were from a block set we already had. Yay !

The lettering is made from fondant, and I added edible sparkles to the cake for a glittering effect. The prep work to make all the pieces/lettering in advance made this a really easy cake to make ! It was a real hit with my daughter – she was sooo excited. Plus, she got to keep the Ariel ballerina doll, too. 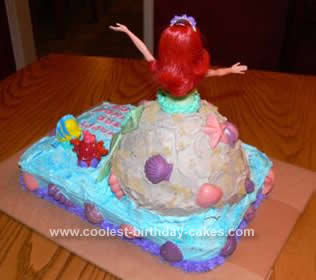