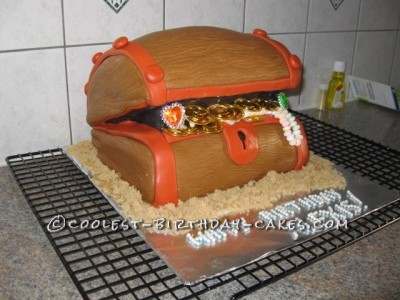 For my daughter’s 6th birthday party, she wanted to have a mermaids party. The only problem was that she wanted to invite some boys in her class as well. So I adapted the theme to Mermaids and Pirates: Under the Sea. For the cake, I decided what better than to have a treasure chest cake full of treasure!

For this treasurechest cake, I made 2- 9 by 13 rectangular cakes. For the bottom of the chest, I cut the first cake in half and placed one on top of the other (with icing of course) and covered it with brown fondant. For the top of the chest, I also cut the 2nd cake in half and put it on top but then I used a knife to carefully carve out the arch of the lid. Because I wanted the chest to be slightly open with treasure spilling out, I placed the top of the chest on a piece of cake board and wrapped the edges of the fondant around the board to keep it covered.

In order the keep the lid open, I made some rice krispie squares and made a piece about 6 inches long and 1 inch tall. I carved it into a triangular piece. This would be used on the bottom of the chest approximately one inch from the front. After placing the lid on top of the base and rice krispie piece, I the covered the inside of the chest (covering the rice krispies) with a piece of black fondant, tucking in all the edges. I then decorated with strips of orange fondant along the edges and front and added 4 buttons on each side of the lid.

I made the lock out of orange fondant with a small piece of black fondant behind it. Using a toothpick, I gently carved lines into the brown fondant to look like a wood grain. Using royal icing, I “glued ” the treasure into the chest. Only the necklace was actually edible. I spread some more royal icing around the base of the cake and spread brown sugar as sand. I then added sugar pearls to spell out  “Happy Birthday Alexis!”.

The unfortunate part was that my daughter got sick the night before her party and I had to postpone it to the next weekend. I was desperate to use this cake that I had worked so hard on so I put it in the freezer and crossed my fingers. Success! The cake was delicious and a huge success! I now know that fully decorated cakes with fondant can be saved. The party was so much fun! 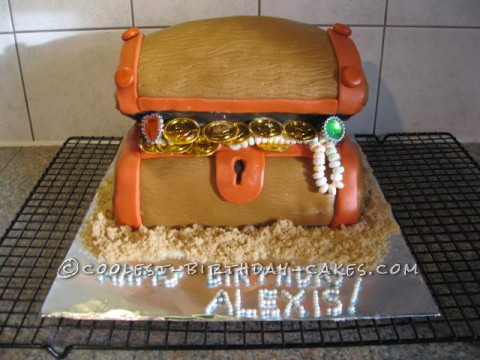 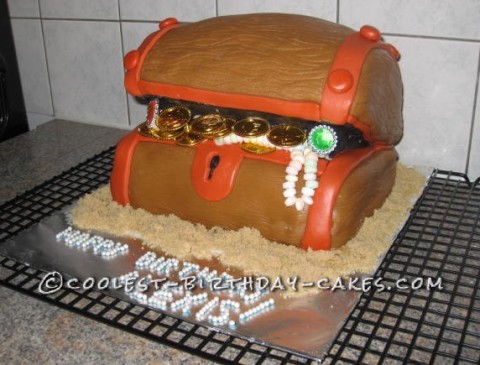