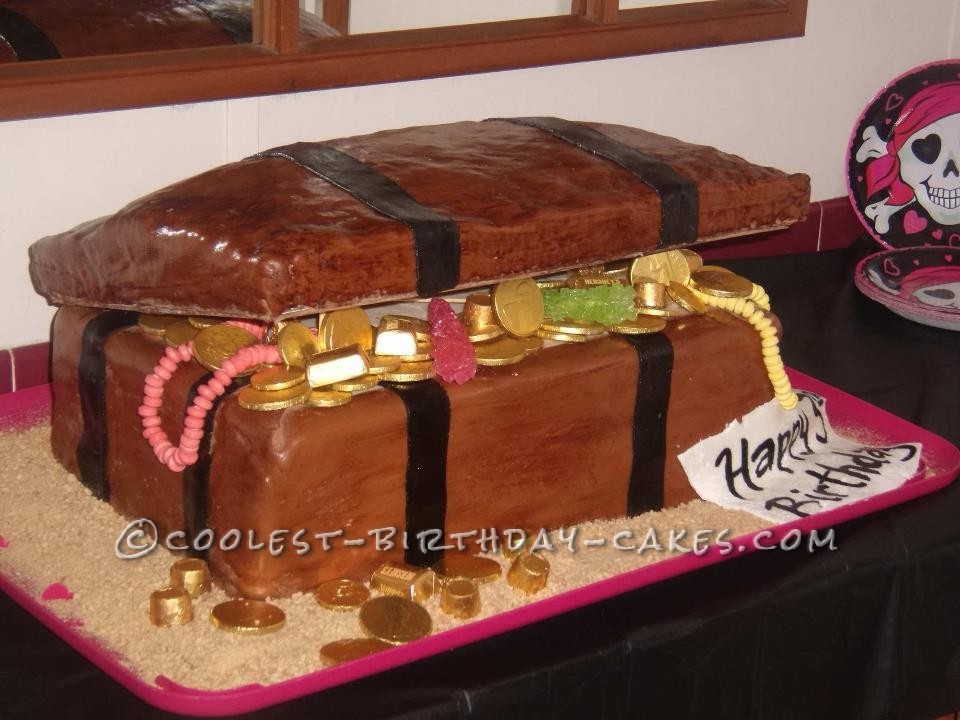 When my oldest daughter (now 5) turned three, we decided to have a girly pirate themed birthday party. What goes better with a pirate themed birthday party than a treasure chest cake? This cake was very large and very heavy but it was a huge hit at the party! My mom and my grandma even tried to give me a heart attack when they opened the lid of the cake while they were checking it out.

To make the cake, I started by baking four 9x 13 sheet cakes. I trimmed down three of these cakes to make them flat and even. I filled and stacked these three cakes to become the bottom part of the treasure chest.  I applied a thin layer of icing. I made homemade marshmallow fondant and I added cocoa powder to make it brown without having to use as much food coloring. I covered the bottom part of the cake with the brown fondant in four sections, though it could be done in one large piece. Doing this in sections makes it easier to roll out and saves fondant. I just made sure the seams would be on the side of the cake where I could put a black stripe.

For the lid of the treasure chest, I wanted it to be rounded so I did not trim down the last 9×13 sheet cake. I took a piece of cardboard and “glued” the sheet cake to the board using icing. I put a thin layer of icing and then applied the brown fondant.

To finish up the cake, I put random stripes of brown food coloring and smeared them around using a wet paper towel. I then rolled out black fondant, cut out stripes and applied them to the cake. I ground up graham crackers and poured them on the base to look like sand. I used chocolate gold coins and other gold wrapped candies, candy necklaces and rock candy suckers under the lid and in the sand to look like the treasure was falling out of the treasure chest. I then took a small white piece of fondant, cut it to look somewhat like a treasure map and used black food coloring to paint on “Happy 3rd Birthday”. 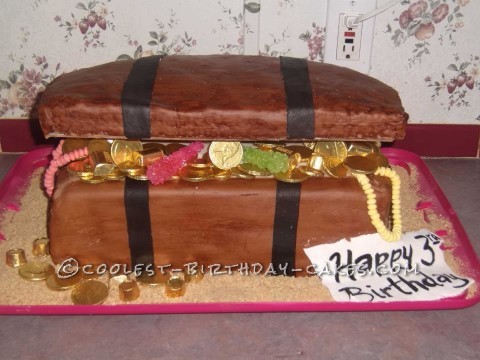