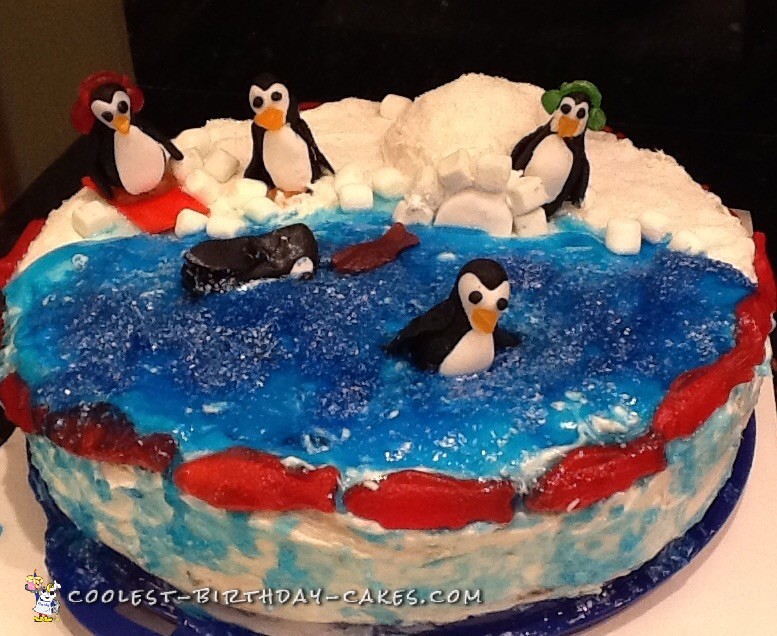 Who says winter birthdays can’t be fun?!?  Sure, you can’t be outdoors, but you can stay inside and enjoy dream up the perfect penguin cake. That is just what my 8 yr old daughter who was born in January and is obsessed about penguins did to make her birthday party a huge success.

Weeks before her birthday we searched high and low to find just the right toppers to make it the perfect penguin cake. We first found black and white fondant for the penguins. Then, my daughter sought out the extras that made the cake creative and super yummy. She first found Pillsbury Fluffy vanilla marshmallow frosting and mini marshmallows for on top to make it a “marshmellow world in the winter…”  Then, my friend gave us the great white sanding sprinkles which made it glisten.

The water was made with Jolly Rancher blue raspberry jello which we added right before it set. We also added the blue shimmery sprinkles. The igloo was made with mini sports ball pan and white fondant for the entrance.

My daughter was so excited when she found the Ice Breakers Ice Cube gum to add to the igloo. She also added the Swedish fish to make a cool border. She placed one fish in the water that one penguin was hunting for his dinner.

There were lots of ooo’s and awh’s as my daughter and I made the cute little penguin friends! We made 5 for each of the girls attending the party. When I thought we had finally finished my daughter turned to me and said,”what about earmuffs?”.  “Seriously?!?” was my response. But, what we do for our kids right?!?  So, I molded the rest of the dots into little earmuffs.

I had exhausted my resources when she wanted skis so we used a plastic ski toy. It was the only thing that wasn’t edible on the cake. The cake had so many layers of flavor. The 12 inch cake was made with half pink velvet cake mix and half devil’s food which made the perfect combo and was super moist.

Surprisingly, the blue raspberry jello and chocolate cake were a yummy combo.  And the ice breaker gum gave the icing a minty taste!  The igloo was made with pink velvet for we had to have a little pink for this was my daughter’s first cake that wasn’t pink. This will be a special memory I will share with my daughter for years to come!