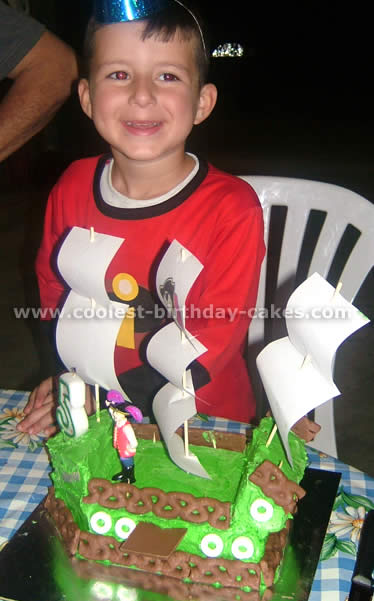 My son ‘Tommy’ was turning 5 and he was really into pirate cakes. I decided to make it a Captain Feathersword Pirate ship cake for a friendlier feel. I had seen the pirate ship in a cake book I have but I changed a lot of it to look different. On the night everybody loved it and thought the cake was great.

I made this Pirate cake for my son, Logan ‘s, 4th birthday. He wanted a pirate birthday so I hopped online knowing I would find the best pirate cakes on www.coolest-birthday-cakes.com.

I started by making a 9×13 cake, frosting it blue for water and even added some Goldfish crackers. For the boat I put the cake into a loaf pan. I sculpted the ends of the cake with a knife and frosted it before placing it on the 9×13 cake. This way there were no crumbs in my water.

My husband made the sails and flags and taped them to 10″ skewers. I searched every store in town for pirate figures with no luck. I just borrowed the characters from my son’s Veggie Tales pirate ship toy. These turned out to be the perfect size. Even Khalil looked good walking the Hershey Bar plank. The cake was so moist I had to use a black straw to prop the plank up.

For this pirate cake I got most of my ideas from this website, I used a 13×9 pan for the water and then a large loaf pan for the ship. The only problem I had was the candy kept falling off. John loved his pirate cake and that is all that really matters!! Thank you for the ideas.

Read Mona’s “Party-Tale”: The story behind the cake…

I bought two box cakes (yellow works best) and prepared them as directed. I made one a 9×13 and then I made three medium sized loaf pan cakes (you only need one but the box makes three, so I made them in case of goofups).

Before you carve the cake it is best to place it in the freezer for about 20 minutes. I also found that it works better if you use the whipped icing because it’s much softer and spreads smoother without causing the cake to break up.

I iced the rectangle cake blue for the water and then I carved the loaf cake in the front and back a tiny bit to give it sort of a ship shape. I then set the ship on top of the rectangle cake and iced it with whipped chocolate icing. I used a butter knife to make the boat have texture like wood.

Then I used royal dansk long crepe cookies to outline the pirate cakes boat. I made my own sails with cardstock and I wrote ‘Happy birthday Donny’ on one set and then printed some pictures from the Internet to use for the other sail.

I placed a little pirate figure in between the two pirate cakes sails, and put a few Reeses bites to resemble cannons. I used candy fish to give some color and we used a toy treasure chest and pushed it slightly into the pirate cakes water as if it was sinking treasure. I also put some little stones around the cake for decoration of the table along with balloons.

This cake was for my son’s 4th birthday. It was also the first time I had tried to make a birthday cake!

My Mum helped me to bake a 12″ square plain sponge cake, which we then cut into three lengths about 4″ wide. We stacked two of the pieces on top of each other and cut the corners off the end to make a “prow”. Then I took some of the third piece of the cake to make the captains cabin at the back.

To make life easy I bought some ready prepared brown icing, which I rolled out and covered the ship all over. I then used edible silver balls and icing tubes in yellow and black to cover the seams and decorate the “stern” of the ship (you can really use your imagination here). The rudder was also made from icing.

Two chocolate finger biscuits were placed at the prow to raise the level slightly, and I made an anchor shape out of left-over icing and stuck it to the side.  I then took more icing tubes in white and blue and covered the cake board to look like water.

Finally, I put the paper “sails” onto wooden skewers, with a skull and cross bones on the top, and decorated the ship with my sons Playmobile pirates.  The four silver candles make great cannons for these pirate cakes!

These pirate cakes can easily be made longer and/or wider if you need a larger cake. It was plenty big enough for my son and his ten crewmates, and we had cake left over.

This just goes to show that you can make interesting pirate cakes even with no experience in cake making or fancy icing! If I can do it, anyone can!

For this pirate birthday cake I used two 9X13 Pans. I cut and layered to the shape of ship. Trims and decorations: Rollo candy, Whoppers. Sand (crumbled graham cracker), and water shredded coconut with blue food coloring. Plank (1/2 of Hershey bar) and wood sticks with cut out paper to make sails. Pepperidge Farm cookies sticks to make edging around the ship and gold chocolate money to decorate as treasure.

I found really easy directions online for making pirate cakes. And to be honest, I had an easier time frosting/decorating this cake than I do just a simple 2-layer cake.

Use two 8-inch round pans. Cut cakes in half, and stack on top of one another with frosting in between each layer, flat sides all lined up. Chill for a while till this stiffens. Cut a bit off of the bottom so it stands evenly; frost the rest, making lines in frosting for “planks” with a butter knife. That’s your basic ship.

Decorate as you please. I used those round Pirouline cookies on the top, heath bar balls for cannon balls, gold Rolos for treasure and waffleten for cannons. I had printed extra invites, so I used the skull and crossbones part of it for the sails and some plastic pirates from a toy around the house. Pirate cakes are fun to make! It was an easy way to impress!

I got the great idea for this pirate cake from this website. I changed it a little because I needed a bigger pirate cake.

This pirate cake was 5 round cakes and 1 square for the island. 4 rounds cut in half then slice off the bottoms just enough to make them stand. Then 1/2 round in the front and 1/2 round in the back. It was so very simple.

My husband made the sail of the pirate cake just by using cake dowels and rolled up pieces of cloth tied to the dowels. I really thought this pirate cake was going to be very hard but it was quite easy.

The icing of the pirate cake is cream cheese icing. I am not exactly sure of the recipe as I have lost it and it was given to me by my sister in law. I know you can easily find it on the web.

I used a basic cake mix and frosting from the local grocery store.

Bake one sheet cake and then cut out in a milk carton shape the bottom of the cake. I then took the remaining cake and added it on top, and frosted the entire ship.

I used the piertos cookies to edge the ship, whoppers as the cannon balls, pirate men that I purchased from a party supply store, a rice krispie treat that I cut into fours as a TNT case, black candles that were aligned into the side of the cake as the cannons, and then dyed the coconut blue for the water.

It was a lot simpler than what I thought pirate cakes to be. Everyone loved it, especially the birthday boy who was turning 24 years old.

Here is a really cool pirate cake; I went on the Internet and found some ideas on different cakes and came up with this version.

For the pirate cake I used a 10-inch spring form cheesecake pan and cut it in half, wrapped it in wrap and put in freezer for a little while to firm up. Then I made a loaf cake and put it on top of the ship to make the upper part. I iced it with white icing and sprayed it with my spray gun.

I made the pirate cake sails out of cardstock paper and long skewers. I used my sons’ little pirate figures, Rolos for the pirate cake cannons, caramel balls for the cannon balls, root beer barrel candy, treasure chocolates and peppermint sticks to decorate the edges of the pirate cake.

I printed out photos from a magazine for the front pirate ghost and the flag. I used a piece of cardboard that looks like wood for the plank. I put the pirate cake on a board before decorating, iced the bottom, sprayed it blue to look like the sea, and placed gummy sharks and cupcake islands on the sea of the pirate cake.

The pirate cake islands were cupcakes with blue painted frosting on the sides and brown sugar on the top for sand, I stuck a pretzel stick on the top and made leaves for the trees out of construction paper.

This pirate cake was fun to make and turned out really cool, I got a lot of comments on it.

For this cake, start with a round cake and cut into half. Put the two halves together with icing, ice the rest of the ships, and put into the freezer for an hour so the icing will harden.

These pirate cakes are easy as long as you keep it cold while you are frosting it.