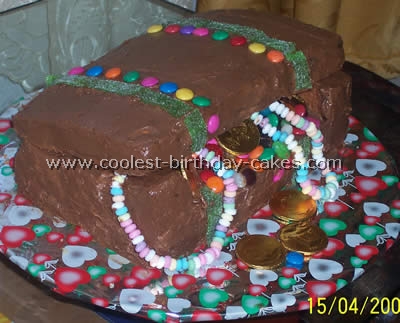 I prepared this Pirate birthday cake for my daughter’s sixth birthday. I had also planned a treasure hunt for the kids (25 in all) in the garden so the cake was in the shape of a treasure chest.

I used two sponge cakes, one higher and longer than the other by about two inches. Place the smaller cake on the bigger and cut out a slice two inches thick so the two are of the same size. The higher one forms the bottom and the other the top of the chest.

Slice the two inch piece diagonally to make two wedges and place them both facing outside. Frost the cake and wedges with chocolate icing. Fill the centre with multicolored edible treasures of your choice and place the top cake to rest on the wedges and treasures. Frost all sides and decorate the top with fruit strips and chocolate gems.

This Pirate birthday cake was made for our Cub Scout pack’s annual fundraiser. Each boy makes a cake to be auctioned off most sell for $50 or more! To make this cake I baked two 8×12 cakes and cut each one in half. For the bottom part it was stacked three high and then frosted. I added filling between the layers but that can be optional.

It was frosted with Dark chocolate frosting and then I ran a fork over it to give it the wood grain texture. The Gold foil covered coins and candy were stacked close to the front so that the “lid” would rest on top slightly open. To make the lid the last cake half was put on a piece of foil covered cardboard that was cut to be the same size as the cake. Be sure to put a little bit of frosting on the cardboard first to hold the cake in place!

Then the front and back of the Pirate birthday cake were cut off at an angle so that the lid would be rounded. It was then frosted the same way as the rest of the chest. For the strapping I used some gold colored foil that I had cut into strips and for the lock I used some of the same foil to cover a small piece of cardboard cut to that shape. I hope your Pirate’s plunder is as profitable as this one was for us!

My son and nephew have birthdays 10 days apart. For the first time they opted to have a joint birthday party and they agreed on a pirate birthday theme.

I used a loaf pan to bake the base of the treasure chest and stacked it two layers high. I was concerned about using another cake for the lid. I decided to use a piece of iced Styrofoam for the lid. I filled the chest with candy necklaces, ring pops, chocolate covered coins etc. Pirates of the Caribbean were released around this time so there were endless possibilities.

The straps on the chest are fruit roll ups. I also bought extras of all the candy and used it to fill the goody bags that were sent home with the kids. One word of caution….the Styrofoam top is flammable! Be careful with the placement of your candles. I put the candles out the sides of the cake and they momentarily caught the lid on fire.

Use two boxes of cake batter and make two cakes. Make or buy two cans of frosting – one brown and one white. It is very important the cake be completely cooled possibly refrigerated.

After frosting the pirate birthday cake brown, refrigerate/partially freeze and then cut out a small section to add the bootie (gold foil coins candy necklaces etc.) and frost inside the section before sticking the candy inside. Then decorate around the cake with your child’s favorite color to add the look of the treasure chest. My son is really into pirates so I thought it would be cool to try and make a treasure chest.

I made this pirate birthday treasure chest from a 9×13 in yellow cake cut into two pieces, then cut a one inch strip from one piece (this will be used to help prop up the lid). Frost the larger piece with chocolate frosting. Place the 1 inch strip of cake in the center, frost and then add the top and frost. Fill the center of the cake with chocolate coins.

This started with a 12×18″ layer cut in half then stacked together. I then frosted it with chocolate butter cream. I stuck in all the ‘pirate treasure’ which included chocolate Kisses Ring Pops, colored rock candy, chocolate coins and candy necklaces.

Then I made several 9″ round cake layers and cut them all in half for the pirate birthday. I stuck them all in a row on top of a piece of cardboard the same size as the bottom layer. I put in a few wooden dowels into the bottom layer that stuck out about 1/2″ from the top. This helped to support the lid once I frosted it and put it on top of all the treasure.

I rolled out and cut strips of white Wilton rolled fondant. I painted them yellow with icing color mixed in vodka (dries faster than water). I then laid them across the cake as metal accents. I used crushed graham crackers as sand on the outside.

My neighbor’s daughter wanted a pirate birthday party for her 6th birthday and wanted a treasure chest cake with LOTS of treasures.

This is a two layer yellow cake. Each layer had a preliminary layer of white buttercream frosting and then I refrigerated it overnight. I frosted the top with light brown to give it the look of the inside of a chest. I used two browns in one bag and added the planks around the outside of the chest. The two browns were used to give it an “old” look.

I used fondant to make the corners and the key hole & key. I added the treasure – M&Ms bubblegum coins, chocolate coins, money coins, ring pops and some pastel covered mints then some Mardi grass necklaces.

Around the outside of the pirate cake I frosted the board with buttercream and then added the “sand” – which is crushed up graham crackers and sanding sugar mixed together. I added some candy shells made from a shell mold as well. I put an eye patch on the outside of the chest too.

She didn’t want a cake lid so I used a thin cake board covered in gold foil and did icing around the edge and wrote on the board. I tilted on the back to give it an open chest feel. I didn’t add the board until right before the cake was brought down. The pirate birthday cake was a huge hit and everyone loved it.

This pirate birthday cake was made for a friend for her son’s 4th birthday. First I made a large Chocolate Fudge slab cake and cut it into 4 for the Treasure Chest. For the Pirates body I used a food can to bake the cake in and carved into the shape of his body.

Both the Cakes were covered in chocolate buttercream and then I used fondant to cover. Chocolate Fondant was used for the Chest and normal white fondant that I colored for the pirate.

Trying to get the lid of the Treasure chest to sit open was a challenge but I used chopsticks to hold it up with some cardboard under the lid and then filled with candy. I used Brown Sugar to look like sand. It took a lot of effort to make this pirate birthday cake but was worth it in the end!

Take candy strips or fruit by the foot to make the straps on the chest on each side. Put small candies along the straps to appear as nails. Then carefully fill with an assortment of candy: gold coins, rock candy, candy necklaces, and/or bracelets. Whatever you want to fill your cake with. Enjoy! This really was simple, the hardest part was icing so just take your time and make sure it is as cooled as possible. Have Fun!

I baked a regular yellow cake from a package in a pan (square pan), waited for it to cool, flipped it, made a cut in the front and stuffed some chocolates, chocolate frosting all over, fruit by the foot (red ribbon) on top with some “pearl” M&Ms and all done.

The sand is graham crackers crushed. I added some Lego palm trees, beads, and candles from local store. The whole pirate birthday cake took less than 45 minutes. You can make any flavor cake and make it as intricate as you want.

I bought layer cakes for our pirate birthday cake because I didn’t have time to bake. This is great idea to save some time. If not, you can make any cake with any filling that you want. Cake has to be around 3 inches tall to look like a chest.

I took 5 candy canes, cut them (different sizes) and stuck them up on the top of the pirate cake. The candy canes make good support for the upper part of the cake (treasure chest top cover). Candy canes will keep top cover of the cake open. I bought a lot of candies. I put the candies on the bottom part of the cake, put little candy chains around candy canes (decorate whatever way you want).

For the bottom part of the cake I used 4 layer cakes. I took 2 additional layers for the top cover. Those 2 layers I put on the candy canes and made a cover for the treasure chest. I used fruit rolls to decorate the top of the cover and at the back side of the cake I folded fruit rolls to seal the chest (front is open back is closed). Around the cake I sprinkled some cocoa powder to look like sand and put candies all over the cake.

This pirate birthday cake is made with three-layers. The third layer cut out to fill with the coins. The clasps and other decorations are made with modeling paste, which sets hard coloured with gray colour; the icing is just a chocolate butter icing.

The lid of the cake is made by cutting a foam box up and giving it the curved shape of a treasure chest pinned together and butter iced; then I inserted two bamboo kebab sticks into the lid and pushed them into the cake so it gives the affect of the lid being open also making it look like you have defied gravity and made a cake stand there with no support (very affective).

To make the clasps etc., I made templates with cardboard and rolled the modeling paste out and cut around the templates finally filling the chest with chocolate gold coins and some plastic bead necklaces. ENJOY; my boy loved it for his pirate birthday cake.