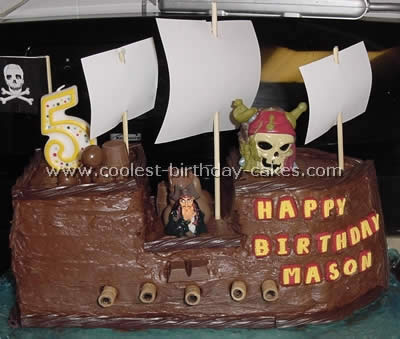 This pirate ship birthday cake was made from two large loaf pans. I used one cake mix for each pan. After baking the cakes I froze them. I then used one loaf as the main ship base and the other for making the bow and the back of the ship in double layer. It was very easy frosting the frozen cut cake.

Then I framed it with chocolate licorice. Made sails from kabob sticks and got the Jolly Roger Pirate flag from the internet. I used half a Kit-Kat for the plank, Rollos for Powder barrels, chocolate malt balls as cannon balls and cereal straws for cannons. Some of the ideas I got from the cakes on this site.

I used a large sheet pan for the cake itself cutting it into the general shape of the ship. The parts of cake that were removed were used to build up and shape the fore and aft castle parts of the ship. The railings were made from sugar wafer cookies. The cannons on and below deck were from Pepperidge farm pirouette cookies which were colored grey with food coloring. The on deck cannon supports were made of chocolate wafer cookies and cannon balls were gum balls painted black with food coloring.

The mast was from a wooden dowel and I downloaded the Jolly Roger from the internet and printed it out to make the sails. I used a canned icing and thickened further using powered sugar so it would textures. After applying the icing to the ship I used a brush to give it a wood grain sort of texture. Gold icing was used to apply a little more decoration and make parts of the ship stand out better. I used a blue dyed icing for the water around the ship. And just for fun I placed a pirate overboard with the sharks zeroing in on him. The shark fins were made of a royal icing and all the pirate figures came from the toy section of a local store.,

I used this website to get some ideas of a pirate ship birthday cake but I only had a square tin. I chopped one third of the cake off the side. Then chopped a small square off the end of the smallest piece of cake and cut it half diagonally to make two triangles.

Using jam stuck the two triangles to the front of the biggest third to make the front point of the ship. Then the rest to make the make of the upraised back bit. All the rest is self explanory really (rails, curly whirl’s, cannons, Rolos cannon balls aero balls). Butter chocolate icing to cover and used a kebab stick to create the wood/plank effect on the icing. I also used two kebab sticks for sails and got the great pirate candles from eBay along with the play Mobil characters. Have a go, I had great fun.

I put a Hershey bar on one side and left it poking halfway out for a plank. I put a few Rolos along the side whoppers for cannons and pralines lined the perimeter of the ship. I also used blue food coloring to tint some white frosting for the ocean and brown sugar crystals for the sand. I found a few pirate toys like a parrot, treasure pirates and palm trees from Target and used those pieces to decorate the ship with.

This cake was a lot of fun to make and I got a lot of compliments!