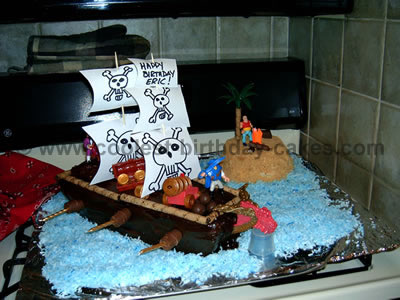 I browsed the Web for all kinds of kid cakes and finally came up with this. First I made a 9 x 13 cake and two 8 inch round cakes. I cut two equal size rectangles out of the 9×13 cake and laid them one on top of each other with frosting in between.

I cut each one of the round cake in half and laid four halves on top of each other then cut some of the bottom up so that it could stand up. I put one section on each side of the rectangular piece of cake to make the bow and the stern of the ship. I froze the cake for a couple of hours and then frosted it with chocolate frosting.

I used long skewers for the masts, Pepperidge farm pirouettes for the sides (around the top) and Rolos for the cannons. I decorated it with toys from my child’s toy chest and with whoppers to make it look like cannon balls and also Hershey treasures to make treasure chests.

For the island I make a round cake and cut it to size, frosted it with white frosting and then covered it with ground up graham crackers. The palm tree is also a Pepperidge farm pirouette with toy palm leaf’s on the top. For the water I dyed some coconut blue. (Just put the coconut into a plastic bag, add a few drop of food coloring and shake.) It came out to be one of the coolest kid cakes.

I made the cake from two Duncan Hines cake mixes. I used one box of yellow butter cake and one box of German chocolate. After this experience, though, I would only recommend using yellow cake for the pirate kid cakes because the chocolate just d idn’t hold up…it started looking like a ship wreck after it was outside in the heat for about an hour.

The boat part of the cake is just two round 9 inch layers cut in half, placed side by side and stood upright. One tip that’ll help the boat stand up is to freeze it so that it is more firm. You can cut the bottom so the boat sits flat.

I covered mine in chocolate icing and made it look like wood by running a fork through the icing on all sides. I added pirate figures, sails, Rolo candies for cannons and A&W Rootbeer barrels. Pepperidge farm pirouette cookies line the sides of the ship and candles can be added to the Rolo candy cannons, but be careful that there is nothing that can catch on fire below or you could have a pirate ship go down in flames.

My son wanted a pirate party for his 6th birthday.  I surfed the web and found lots of great ideas for kid cakes.  I found this Pirate Ship cake and added my own touch to it.

Basically, you need to make a normal cake recipe using two 9-inch round cake pans. After the cakes cool, cut both kid cakes down the center.  Use chocolate icing (homemade or in the can) and “glue” the layers together.  You may also want to use something else as support while these set up.  I used drinking straws cut in half and stuck them through in three sections of the cake.  Also, cut the bottom of these 4 layers to make it sit level. (You don’t want this boat rocking while you’re trying to decorate it). Wrap these tightly in cellophane and put in the freezer for about an hour.  When they’re ready, they will be nice and firm and you won’t have to worry about them falling apart while you’re icing the cake.

I used a cake board decorated with metallic blue tissue paper and cellophane.  I also added gummy sharks and Swiss fish around the bottom. Next, ice the cake with the remainder of the icing.  I used a butter knife and drew “planks” on the side of the ship.

Now comes the fun part – decorating! I used Swiss rolls cut in half for the cannons on the side. (Again, I used straws to hold these in place). The cannon balls were Whoppers, the treasure chests were Hershey “Treasure” chocolates, and the figurines were purchased at a local party store.  I used Pirouettes as the side railing. The sails were cut “free-hand” out of regular card stock and I just slid them onto Skewers. I used leftover silver candles and stuck them in the ends of the “cannons”.  I left it in the refrigerator until ready to serve.  This is one of those kid cakes that not only the kids loved it, but so did the grownups!

This is my pirate ship cake! The sails and flag I made on the computer. The barrels and sharks are candy. The posts and ropes are royal icing.

I baked a regular cake mix and baked it in a loaf pan. Then I carved the sides rounded like a ship would be. I took the extra pieces of cake and made the triangular piece on the front and raised deck on the back.

I printed the pirate flag and sails on the computer. I used Rolos for the cannons and cookie tubes for the rails on the sides. Whoppers are the cannon balls. For the water look I took plastic wrap and colored with a marker on the underside and placed it over the foil. They loved it.

I made this pirate cake with a chocolate cake recipe then cut it in half. I used malt-teasers and rolls for canon balls and barrels. I made a pirate out of icing. I then made an island and covered it in ‘sand’, which was coloured coconut. I added an icing palm tree and a treasure chest with jelly tots as treasure. This pirate cake was for my grandsons 4th birthday.

I got this idea from surfing the internet in search of a pirate cake; it was pretty simple.

I used a bought cake mix and icing. Two round pans for the cake. Once baked, cut both into halves. Let cool. The pirates, boat, raft, etc. were all bought at the dollar store. All glued on the surface with a glue gun. I used toothpicks and string around the deck of boat. The sails were made of skewers and paper (I got the skull signs on the internet and printed them out).

I did this cake for my sons 6th birthday. I took two sheet cakes and cut them into the shape of a ship. I iced it with chocolate icing to look like wood. I then put graham cracker sticks around the edges of the cake. I used some toy pirates I found to put on top of the cake. I made the sail by printing off a picture of a skull and crossbones and glued it onto a card stock. Then I used wood skewers to put the sails on and stuck the skewers in the cake. You can put the candles on the sides of these sort of cakes so as not to catch the sails on fire.

Step 1: Cut the cakes in half and layer them, rounded sides all facing the same direction, adding a thin coat of chocolate icing between the layers.

Step 2: Trim the bottom curves of the cakes slightly to help them sit flat, then turn the cakes upright, as shown. (Tip: If necessary, wrap the cakes in plastic and chill in the freezer to make them firmer. Also, two drinking straws stuck through the four layers of cake will help keep them together.)

Step 3: Cover with the chocolate icing, then create planking lines along the hull with a butter knife. Chill at least one hour to firm the icing.

Step 4: Use dabs of icing to anchor wafer stick gunwales along the edge of the deck.

Step 5: Cut sails from the paper, then slip them onto the skewers and set the masts in place.

Step 7: For safety, place the candles in the cookie cannons, far from the paper sails. Also, make sure that the surface on which the cake rests is impervious to wax, as the burning candles will drip.

I started with a sheet cake and iced it blue for the water. Waves were made with a knife. The ship is an 8in round cake cut in half and iced together. I shaped one end of the ship to a point and cut off the bottom slightly so it would sit up. I also used toothpicks to anchor it to the sheet cake. The guns are tootsie rolls as are the top edge of the ship. I used candy shaped like treasure chests and malted milk balls for cannon balls and gold wrapped candies. The sails and Jolly Roger were done on paper with samples from the internet. I used straws to hold the sails. Mat loved the cake and you should have seen his eyes when he first saw it!!!

I started with a rectangular cake. I printed the image off on the computer, and placed it on to the cake. I carved around the paper to shape the cake. Then, I iced the Shrek cake using butter cream icing.

I got the pirate ship cake idea from your website. I made two 8-inch round cakes, and put them together with frosting in the center. I then put them in the freezer over night (per directions from your site). The next day I took it out of the freezer, drew my ship shape on a piece of paper as a template and cut the cake out.

I frosted it with chocolate frosting. I used chocolate roll cookies for the railing top and bottom added yellow M&M’s. For the cannon balls I used tootsie rolls. We made a treasure box out of Hershey minis and filled it with gold coins and a candy necklace. I added a pirate and cannon balls (whoppers).

For the party my nephew and I cut out ships out of large washer boxes and painted them we also put flags and sails on them. I face painted mustaches and beards on all the children. The really had a great time. The parents were very impressed. On Monday when Grant went back to school all the kids talked about was his party.

I also made treasure boxes for the snacks and the goodie bags. Because of the rain we couldn’t have a treasure hunt, but we brought out the treasure box at the end of the party and gave the children their goodie bags. I made the goodie bags my self. We used paper bags and I made my own stamp out foam paper (skull and cross bones) and stamped it with white paint. It was an awesome party, my nephew told me it was the best party he ever had.,