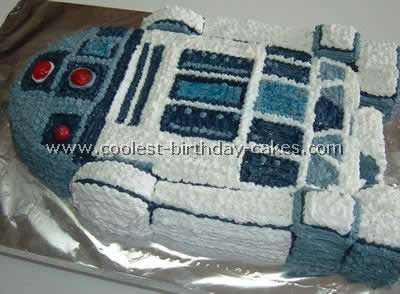 This R2D2 cake was created for my nephew Cyle when he turned six years old. The cake was constructed of two 9×13 sheet cakes and 1/2 of a 9-inch round cake. The body is one 9×13 cake, the head is a half of a round cake and the legs were cut from second 9×13 cake. Yellow and chocolate cakes gave variety to birthday party guests.

My R2D2 cake was inspired by my son Jonathan’s fascination of the Star Wars movies. For his ninth birthday we were going to have a Star War themed birthday party for him. It was my job to come up with an original Star Wars cake. As I was thinking of something easy to do my eyes became fixed on my son’s R2D2 toy he got from McDonald’s happy meal. Immediately I figured out how I could replicate the toy as a cake.

I used three 9″ square pans and a 9″ round Pyrex bowl for the top. First I made sure that all were even. I stacked them up and trimmed the cakes as necessary so that when they were stacked up they would all be symmetrical and even. I used the toy to guide me with how to decorate the cake. I made butter cream icing and used white royal blue, grey and black to decorate the cake with.

I started icing the bottom three layers first. Next I put the 9″ Pyrex bowl cake for the top of R2D2 and iced the top according to the toy. I star tipped in some of the R2D2 to make the buttons and knobs look realistic. Finally I cut out the legs of R2D2 from my 9″ square cake and decorated and attached to the body with icing.

It was an awesome R2D2 cake that was admired by many Star War fans.