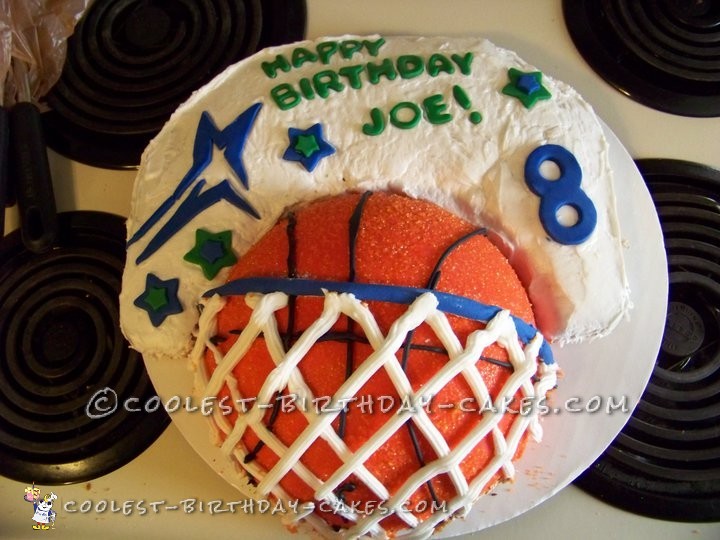 My son has been playing basketball for several years, he started out playing through church Upward league and for his 8th birthday I decided I wanted to make him a basketball cake. I tried to look online for inspiration, but wasn’t having much luck. I knew I didn’t want to make a typical 9×13 basket ball court cake, or use my dome pan to just make half a basketball. Then one day the idea just hit me!  I would literally make a slam dunk cake!

I started by making the two cakes. I made a vanilla 9×13 cake and a chocolate dome cake. All my cakes are box cakes with pudding added in. So the back board was vanilla cake with french vanilla pudding mix added in and the dome cake was devil’s food cake with milk chocolate pudding mix. I then carved the 9×13 cake down to resemble a back board and  iced it with vanilla icing. I cut fondant into the shape of the Upward logo and the number eight and then used fondant alphabet stamps to stamp out the birthday message.  I also used star stamps to make the stars on the back board.

For the “basketball” dome cake, I covered it icing and orange fondant. I wanted the ball to have texture like a real basketball, so I wet the fondant and covered the ball in orange sugar crystals. Then I pipped black stripes on the “ball”. I used blue fondant to make the rim and then piped royal icing with a star burst tip to make the net.

I then very carefully pieced the two cakes together. The “back board” was already on the plate and then I used a wide pizza spatula to move the “ball” over and pushed it into place.  Everyone seemed to really enjoy the cake and my son was very surprised by his creative cake.