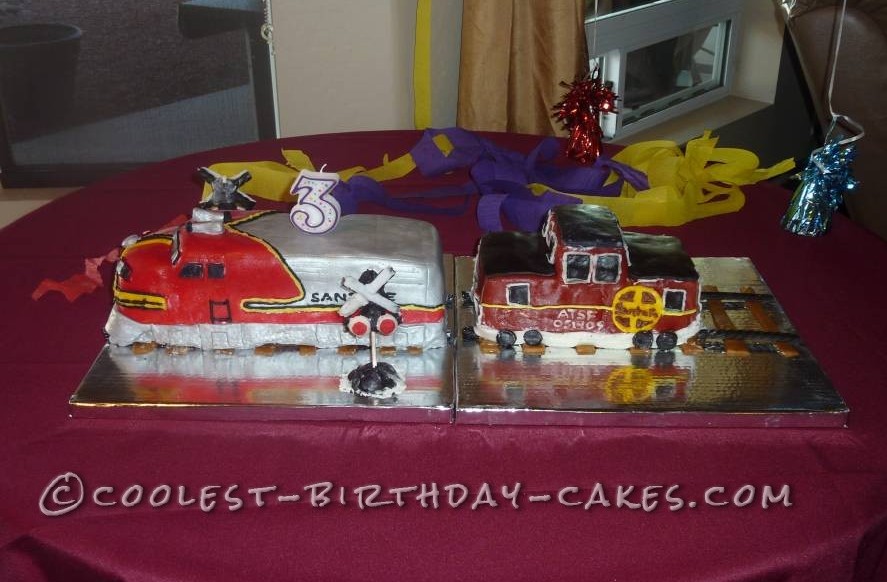 I asked my son who was turning three “What kind of birthday cake do you want?”  His answer was shocking, “I want a Santa Fe cake!!  He had recently seen the Santa Fe from a train video. Since then, I think Thomas the Train has taken second place. For years I had kept a cookie jar in the shape of the famous Santa Fe Super Chief train engine. It was the perfect model for my son’s cake!

Since I had no cake mold for this special train cake, I used two loaf pans (9 1/2  x 5 1/2) for the train. I stacked the two loaves on top of each other and used butter cream frosting for the filling.  I chilled the cake in the refrigerator for 1/2 an hour and then carved the shape of the train. After the cake was chilled I covered it with butter cream frosting before putting on the fondant.  I wanted to use fondant  that was easy to work with and tasted great! I ended up finding a recipe for marshmallow fondant which was perfect and stretched like elastic! (1 lb of small marshmallows, 1/2 cup of Crisco, 2 lb bag of powdered sugar, 4 tbsp water).  The most difficult part of making this cake was kneading the fondant by hand. I think I developed stronger arms and hands after this process but it was soooo worth it and sooo much better than any fondant I ever tasted!

I divided the fondant for each color that I was going to use on the cake and tinted each with high quality food coloring (found at a craft store). I used edible silver paint for the majority of the train engine and bought a paint brush for cakes.

While I was making the cake I did not want my son to see it since it was going to be a surprise. As he entered the kitchen, I quickly covered the cake with a towel. Little did I know, the bottom half of the cake was still showing and he recognized it right away!  He yelled out “A Fe cake!  You make me a Fe cake mommy!!  I want to see it!”  So needless to say, he had to watch me finish his cake. I used a pre-foil wrapped board (found at craft stores) and used black licorice and strips of brown fondant for the train tracks.

I thought I was was done after spending hours on the Santa Fe engine but not according to my almost 3 year old son! I heard, “Mommy, where’s the boose?”  I couldn’t tell him no, right??  So I researched what the correct caboose looked like for the Santa Fe and used the same process as the train engine (two loaf pans stacked and covered in fondant).  Around 2 am (when everyone was sleeping) I added the final touches with a train crossing signal made from my left over fondant pieces.

On the day of his birthday, my son did not allow anyone to cut into the Santa Fe engine cake!  He told us we could have the caboose!  My son will be turning 4 years old soon and has requested the same cake again!