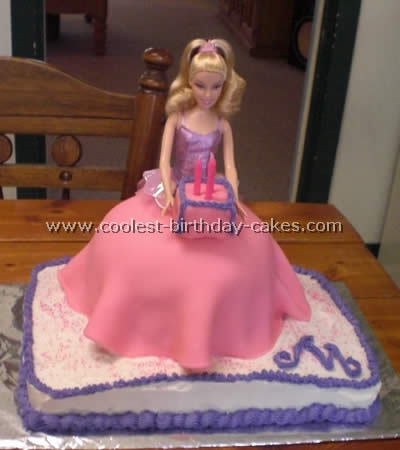 I made this Barbie doll birthday cake under the skirt using a 2qt. glass measuring cup. I used one cake mix and cooked it for one hour at 325 degrees. I made a 9×13 sheet cake and decorated it with regular frosting. I decorated the skirt with Wilton Ready to use Fondant. I secured the skirt cake with two dowels to make sure it didn’t slide.

I made the little cake that Barbie is holding using a little box that I poked holes in for the candles and then decorated with fondant and piped icing. I wish I would have made the little cake white so that it didn’t blend into the skirt. This was my first attempt at themed cake. I was very happy with it.

This is a Barbie doll birthday cake I made for a friend’s niece who is three. As all little girls this age love a princess, I thought she’d especially love one named after her. Since I am a beginner decorator I used a basic white cake mix, no frills and basic buttercream icing with Americolor “soft pink” for the tinting.

I did a basic crumb coat over the surface of the skirt and smoothed it with a paper towel. Then I followed with three rows of the ruffled trim and several going up the front of the dress for a petticoat appearance. The scallops around the skirt are done with a star tip.

Small flowers are done with a #2 tip. Lastly I decorated the bodice with the same star tip just moving up and down all the way around and once I inserted the doll pick I sealed it off at the bottom with another star tip ruffle.

Her necklace is edible pearls attached with some butter cream and little earrings are #2 tip dots with the same butter cream. This Barbie doll birthday cake is not too bad for my second cake like this

This Barbie doll birthday cake was for my three year old niece who loves Barbie so here it is. I used a Pyrex bowl and baked two cakes. Once cooled I placed the two cakes on top of each other and shaped them into the skirt. I bought a Barbie pick from local craft shop and simply pushed it into the centre.

I then just made the pink icing and decorated it. My niece loved it but so did everyone else. I could have taken orders but I stick to family only.

I have seen a Barbie doll birthday cake before so I decided to make one. I used two bunt cake pans and some doughnuts to fill the hole at the Barbie’s waist line. I am pretty creative. I put a lot of love into it and it turned out awesome! It tasted great and the kids loved the doughnuts!

After all the inspiring stories on this page I decided to give a shot at making a Barbie doll birthday cake. Not bad for a first try! I’m not very handy in the kitchen so I had a bakery make the cakes for me then I iced and decorated them myself. My daughter was quite impressed with how much the cake turned out to look just like The Island Princess Barbie. (Truthfully so was I!)

So if you’re trying to decide whether or not you think you’ll be able to pull it of, I say give it a shot! Just hearing your little girl bragging about her Barbie cake is well worth the four hour decorating time! The only tip I can think of that I haven’t seen posted already is probably to make sure to use a thin layer of regular icing under the fondant (if you use fondant), because even after I flavored the fondant myself it still just wasn’t very tasty. But having a little bit of regular icing in-between each layer and surrounding the skirt under the fondant gave it just the right amount of sweetness!

This Barbie doll birthday cake was made for a very good friend’s daughter. The cake was prepared by making a sponge cake and cooked in a doll tin (pan) from Wiltons which I have had for many years.

Once the cake had cooled I put in a Barbie doll (with no legs) then used regalice colored pink to cover all over. I then made a bodice and the pleated back. This is done by rolling out the icing then gathering it up and pinching the tops (use dowels to hold pleats in place them remove when ready to put in place) using boiled water to stick in place. royal icing was made up and a criss cross design was piped on the front. Cake recipe: 12oz margarine, 12oz sugar, 12oz S.R flour, 6 eggs, 3tsp baking powder, a few drops of vanilla essence. Royal icing: 1 egg white, 8oz icing sugar.

I baked, layered and sculpted this Barbie doll birthday cake using white fondant. I colored and cut petals from (using a petal cookie cutter) the fondant. Inserted doll in cake. Fixed the petals to the cake with butter icing and finished with cake decorators metallic flower dust.

I prepared the petals before hand; however they didn’t keep perfectly so I did them again on the spot (nice and fresh). Every year my two daughters pick a different Barbie doll birthday cake for me to create so they get better every year! Tip: if you could buy one I would, this cake took eight hours from start to finish!

Barbie cake by Amy Nez B.

I combined a lot of the ideas I found on this site for a Barbie doll birthday cake along with the ideas of a professional cake decorator. For the very bottom I used half a yellow cake mix (which crumbles less than other cake types) baked in a standard 9″ round cake pan. The middle section I used a large mixing bowl and filled it with an entire cake mix. This took about 50 minutes on 350 degrees to bake. The top is a small mixing bowl with half a cake mix. This took about 40 minutes at 350 degrees to bake. There really is no standard time frame to go by so you have to just keep checking them.

I took the large mixing bowl cake and put it directly on the 9″ round cake with frosting. It was a perfect fit. then I took the small mixing bowl cake and cut about an inch off the flat bottom and with frosting put it on top of the larger mixing bowl cake. Then I put one solid layer of an easy spread cream cheese frosting on the entire thing, cut out a small hole for the Barbie (I removed the legs) then I tinted my frosting and put it on the dress portion of the cake with a star tip. It took a little over three hours from start to finish including baking time but it was worth it. My three year old daughter loved her Barbie doll birthday cake!

My little girl loves Barbie dolls and anything pink so I decided to create a Barbie doll birthday cake for her third birthday. The cake was made using two chocolate cake mixes each bake in two 8″ round cake pans. When cooled each cake was sliced crosswise into two layers (that’s a total of eight layers).

In between layers I used chocolate frosting so the finished cake was as tall as Barbie measures. I then wrapped the outside of the cake with a layer of wax paper so that the layers were perfectly straight and froze the cake until it was solid. I then cut a hole (with the same diameter as the Barbie doll) in the stacked layers from top to bottom and trimmed the top of the cake to create a skirt shape.

I colored the fondant with pale pink food color, wrapped it over the dress and decorated it with white sugar flowers (the glue was made of fondant mixed with hot water). I cut out a top for Barbie from the fondant, wrapped it on the doll and also wrapped her legs in “press and seal” wrap so she would not be ruined. I then cut out a small hole on top of the cake for the Barbie to go in and did the final decorations around her waist.

From cooled cake to end result it took about three hours. The Barbie doll birthday cake was a huge success!

I used a large round pan for the bottom layer of the Barbie doll birthday cake. The cake is a homemade Belizean white cake recipe and a stainless steel bowl. for the top layer the cake is homemade Belizean chocolate cake. As you can see the bottom was slightly larger than the top so I used cookies cut down to fill the space. It allowed for even frosting.

The doll was missing a hand. It was the doll Kenema wanted in the cake so I covered the booboo with the ribbon and a candle.

For the hat and purse I used Styrofoam cut down and hot glued together. The frosting was homemade buttercream.

It is my first attempt at making a doll cake and I think it was a success!

This Barbie doll birthday cake was for my daughter Rebecca’s 16th Birthday. I used a medium sized Pyrex bowl and a recipe with lady fingers and cream cheese for the top and two 8 in. rounds I baked from a mix to give the bottom some height.

Once the cream cheese and lady fingers were set I turned them out on to the round layers and I frosted with pink frosting. I used pink sugar to decorate the dress and I used a doll pick I got at the party store.

Barbie cake by Siobhan B., Shepherdstown

For this Barbie doll birthday cake I used the Wilton cake pan with the Wilton doll (that doesn’t have legs but a stick instead which makes it much easier). I pulled the doll’s hair into an “up” do and stuck her into the cake adjusting her arms to how I wanted them so as not to ruin the cake later on if I had to move them and mess up any icing.

I made the icing, tinted it to the color I wanted (which was a pink/peachy color). I iced the entire cake first smoothing it out as I went. I had to put the cake in the fridge a few times to harden the icing a bit so that it was easier to smooth. For the most part I used one of the pictures on the Wilton cake pan box as a guide for the decorating on the cake. I also dusted the cake with the shiny sprinkles which is hard to see in the picture but really added to the finished look.

I used icing in her hair (and earrings bracelet and necklace as instructed by my three year old for whom the cake was for) to cover the rubber band that was holding her hair in place. We added a number “3” candle at the base of the cake when it was time to sing. We also found it easier to make two dozen cupcakes so that the little ones could have their cake right away as cutting this cake took a little longer than most cakes! It was a fun easy cake that our daughter was delighted with!