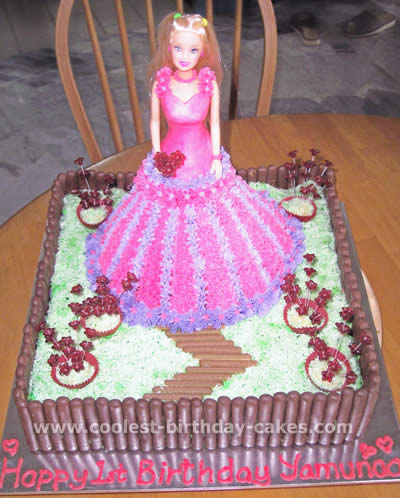 I got lots of inspiration from the Barbie cake pictures on this site.

I made this Barbie cake from scratch. The garden as the base was a chocolate cake and the skirt is a butter cake. For the garden, I used chocolate fingers as the fencing and also the pathway. The flowers are plastic from the flower shop stuck into icing, which I put into small cupcake cups. The grass is desiccated coconut tinted green. It was really fun to make and the kids loved the Barbie.

This cake was for my daughter’s fifth birthday (although it’s not the first Barbie cake I’ve made). I used a Pampered Chef large mixing bowl for the cake pan, and it takes 2 cakes (1 cake mix fits the bowl perfectly) – one whole cake, and then about 2/3 of the second cake to make it tall enough.

I wrapped Barbie in plastic wrap, stuck her in the cake (after frosting between the two layers) and then frosted the whole cake. I used all store bought frosting and used Betty Crocker Barbie candy cake decorations with Betty Crocker pink and yellow frosting that comes in the tube. I put a piece of scotch tape around her ponytail and then frosted it to match the dress.

My daughter was turning 3 and I thought a Barbie Doll cake would be just the thing. I was a little nervous about it, but it turned out to be very easy.

I baked a dome shape in a 2 qt. Pampered Chef batter bowl and also bake two 8″ round cakes. The dome was vanilla and the base cake was chocolate. I froze these a day in advance. I found the cake to be much easier to work with.

I did a base coat of regular white icing on the “stage” base cake. I then piped with Wilton’s canned frosting. (I cheated) I used the basket weave tip and just squiggled it up the sides. I colored the skirt pink and was able to texture it with a paper towel. I was able to lay the paper towel over the skirt and gave it a nice texture. I piped the bodice with a star tip and accented the skirt also. This was so much fun!

This was the second Barbie cake I did. It was for my two-year-old. I used a Wilton Wonder mold (just like the last one).You can get so creative on these as you can see by all the Barbie cake pictures on this site.

I can’t wait till one of my daughters wants a mermaid one.

I thought putting the candles in her hands was a pretty good idea. But it’s really just a fire hazard… I like the other lady’s strawberry idea better.

I used a Strawberry box cake and baked it in a medium HENN WORKSHOPS 8″ mixing bowl at 325 F for about 50 minutes. I used a long skewer to insert in the middle of the cake to make sure it was baked completely.

Then I let the cake cool for about 3 hours and mixed up a batch of butter cream icing. I divided the icing into 4 colors: white (uncolored), light pink, bright pink and purple. Most of the icing was colored light pink.

I used a discount Barbie I found in a clearance bin at the toy store. First I took Barbie’s legs off then I cut out a small hole in the top of the cake and inserted her body into it. She stood up pretty well on her own but I used a couple of toothpicks at her back just to make sure and filled the hole in with icing.

I used 16, 18, and 224 tips to pipe the cake. I started piping on Barbie’s top first with a small star tip (#16) and then piped her dress. I’m not a great cake decorator by any stretch of the imagination but this was actually a lot easier than I thought it would be and took less than an hour before the final product was finished.

My daughter, Reagan, absolutely loved her cake and told me “She’s beautiful, Mommy!”

My niece asked me to make her a princess cake. I used the Wilton doll pan or dome pan and baked the cake as instructed. I frosted her skirt with a frosting knife to achieve the rounded grooves throughout the skirt. This gave it the look of movement.

I then created a crown out of paper and ribbon and left the ribbon longer so it could wrap around the dolls hair. Once the crown was in place I inserted the doll into the center top of the cake.

Working with a darker pink frosting and a flat tip (I couldn’t tell you the number but it is used to make roses) I covered her torso. I outlined the bustles with a toothpick and then using the same tip I scalloped around the bustle working from the bottom to the top. I just let the frosting drape as it came out to create the look of ruffles.

I also used the same technique to create the ruffles around the bottom. I felt that it needed a little sparkle so I added silver sequins at the top of each ruffle and a few throughout the bustles. I used a little left over ribbon and made a belt.

She absolutely loved this princess cake, and so did I! With a flat tip I scalloped the frosting in layers to create the bustles. You must layer from the bottom working up so that you finish around her waist.

I made this cake using the pampered Chef batter bowls. I used the large bowl for the main part of her dress. I then made another cake in the small batter bowl (only using about 3/4 of the cake batter).

Once cooled, I removed both cakes from the bowls and placed them in the freezer for about 4-5 hours. Once frozen I cut the cake from the small batter bowl in half and placed it on top of the larger cake; using frosting to hold it together.

I then cut a hole for Barbie. (Make sure you wrap her in plastic wrap before you place her in the cake. Go very slow when placing Barbie in the cake, her hips can break the cake if you push too hard or too fast).

I then shaved the rest of the small cake away to fit the rest of the dress. I used one medium layer of white frosting over the entire cake. Then place it in the fridge or freezer for about 7-10 minutes.

I then applied another coat of frosting (I find this helped with crumbs showing through), and then used a large knife to make soft guidelines to separate the ‘V’ part of the dress. I picked the Birthday Girls’ favorite colors and started piping with a tip 18 for the blue part of the dress, 2D for the boarder around the bottom, 21 to outline the V part of the dress and 67 for the lace inside the V.

This was a spin on the classic 2-tier wedding cake. The bottom tier is a 12-inch round. I used dowels to supports each of the dolls on top of the first tier. Columns were then inserted to support the top tier, which is a 6-inch round cake.

The cake is iced in butter cream. All flowers are made with butter cream. To make the dolls I started with mini-bundt cakes; I then iced them in butter cream and overlaid fondant on top of that. I then inserted doll picks and iced the top of the dolls with fondant accented with royal icing to make all of the details including the hats.

I baked 3 round pans of vanilla cake and stacked them on top of each other with icing in between. I made the dress by cutting /sculpting it. I’ve tried to use the pan for the dress, but found that the pan is not big enough to make a fuller dress.

I bought a real Barbie (used it with legs and all) and decorated the dress. I made the wings out of chiffon material. Special secret: there is a small gift hiding in the cake as a surprise for my girl (Barbie clothes and jewelry).

This was my first attempt at anything like this. My daughter asked me for a Barbie cake and I stressed over how I was going to make it for weeks. I was very pleased with the final result. My daughter’s exact words once it was finished were, “I love it! I knew you could do it Mom!” That made all the stress worth it.

I used three chocolate cake mixes to create five layers of cake to make it tall enough to reach Barbie’s waist. Then froze the cake solid so I could carve the top to take the shape of the skirt. Then decorated with icing.

This was for my daughter’s 3rd birthday (when the pink, Barbie and the princess fever really starts to kick in for girls). She wanted a Barbie princess, so I bought a Barbie doll mould for cakes online. You could do one even with ovenproof bowls and round dishes- stack them with icing layers and trim to shape.

I baked the cake. I made a hole in the center of the cake and wrapped the Barbie in cling film. I put a bit of butter icing in the hole and put the Barbie until the hips were covered. I made the icing in pale pink butter icing for the skirt, pink sugar paste/fondant icing for the top layer, bodice and tiara and some Barbie decorations from the cake baking aisle in the supermarket.

For my daughter’s 5th birthday, we had a princess tea party, and she asked for a princess cake.

I baked the “skirt” part of the cake in a Pampered Chef Pyrex batter bowl (1 box confetti cake mix). But since it didn’t rise as much as I expected (maybe because of our 5000′ altitude, even though I followed the high altitude directions), I had to raise it a bit by putting a 9-inch layer underneath (to make the proportions right for the barbie doll “pick” (no legs) that I got at Hobby Lobby).

First I frosted the whole cake in white decorator’s frosting, to cover the cake. Next I tinted some icing pink and frosted the body of the doll. I used store bought decorators icing in bright pink to place little flowers along the top and at the waist of her bodice.

Then I used my Pampered Chef Easy Accent Decorator to place flowers in homemade pink decorators icing all over the skirt, except the front, where I left it plain white to write her name and age. I also used the store bought pink icing to do little accent flowers along the bottom under her name.

All the Barbie cake pictures on this site are a great inspiration and it was pretty easy overall for a novice cake decorator like me. My daughter loved it and all the moms at the party thought it turned out great.