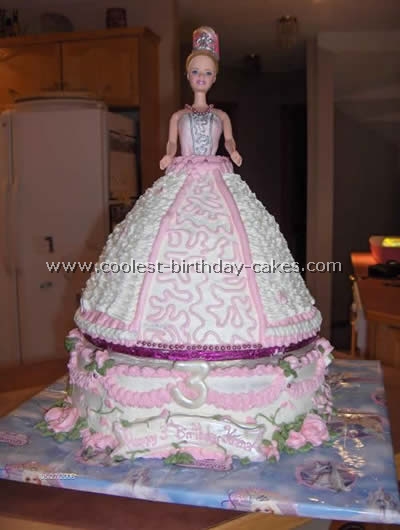 For this Barbie birthday cake I used the Wilton wonder mold pan, with a 10-inch round underneath. The bodice is made with fondant and painted with silver luster dust. The roses are buttercream.

I had more fun getting the doll ready and her hair looking nice. (I forgot what it was like to play with dolls…). Anyway, back to being a grown-up… I made this Barbie birthday cake for a colleague at work and her daughter’s 5th birthday party she was having. It was quite different for me because her daughter had allergies and this was the first dairy free cake I had ever made. I was really pleased because the feedback I received afterwards was that “it tasted really nice” and since then I have used the recipe again and again :o).

Once I had got our Barbie all presentable I wrapped her lower body up in Clingfilm (yes, you could class that as a beauty treatment also!) to keep her from touching the inside of the cake. I baked two 8″ inch round Madeira cakes (with grated lemon rinds and ground almonds) and set to carving them up. I carved to get the exact shape I wanted; this was the most time consuming (apart from colouring the sugar paste purple myself which took forever, I would always buy that colour if used again, phew!). It was really nice building up Barbie’s dress with the layers and using a texturing tool for the middle layer plus I think the colours worked really well together.

Alas unfortunately I think my next project will have to be to go on a photography course, haha – not my best ability, although it is not bad for a picture taken on a mobile phone ;o).

For this Barbie birthday cake I used a small metal bowl with 1 1/2 cake mixes and 1 single layer cake in a round pan to form the skirt. I bought plastic flowers from Walmart, stuck them in and around her skirt, and covered the bowl shape with icing, layering star shapes all over her skirt in different colors. This Barbie birthday cake was for my 4 year-old’s party and she LOVED it!

If I remember well, I used one of the models on the original box of this cake mold. The toughest thing was the top of the dress, on the doll itself. Since it is made of plastic, the icing was always sliding!

Everything on this Barbie birthday cake is done with icing excluding the hat and the doll’s upper body.

The circumference of the large jelly mould was the length of the skirt edge and the height is a bit longer than the height of both cakes stacked together. I made the scalloped edge with a modeling tool and embossed the skirt with rose bud and leaf embosser. Sorry that the embossing is not seen in the picture, it’s easier than you think.

My niece, Isabelle, was turning 4 and wanted a Barbie party so my sister asked me to make this Barbie birthday cake. I made a strawberry cake mix so the entire cake is pink. I made a bundt cake and then a cake in a Pyrex bowl and used the bundt cake as a base and the bowl cake on top with some icing between. Next, I cut a hole in the top and wrapped Barbie in plastic wrap and stuck her in. I iced it with white icing I dyed pink.

I use the Pampered Chef Large Batter Bowl to create this Barbie birthday cake. Bake 2 cakes and invert one and cut off about 2 inches of the smaller end and use this for the base. I then balance the 2nd cake upside down on top of the 1st portion. You must level the tops off to make them fit together nicely.

I then cut a hole out in the center to make room for any Barbie size doll. Decorate according to theme of the party!

This was my first Barbie birthday cake. I always use Duncan Hines Cake Mix so that is what I started with. To start, I used the Wilton Wonder Mold and followed the directions on the box. I bought the doll head at Walmart in the cake decorating section. This Barbie birthday cake was made for a little girl who loved pink and purple.

I used a star tip and covered the “dress” part as well as the doll top. Then, I glued a piece of ribbon to the dolls head and then glued tiny rosebuds onto it. I also made the pocketbook that is hanging from the dolls hand from ribbon and poster board. I always cover my cake boards with some type of coordinating material so with this cake I choose a Barbie theme material.

The icing rosettes on the front of the board are where the candles will be put. This was a fun cake to make and since I have all boys myself I never get to make any “girly” cakes.

I used a basic cake mix for the cake and just used food coloring for the icing. I used a 12″ pan for the bottom layer, a 10″ pan for the middle layer, and a pampered chef mixing bowl for the Barbie skirt.

I’ve never made a cake like this before, so I bought the Barbie pick instead of using a full Barbie, I didn’t like the face or the hair that was on the pick so I just put a regular Barbie head on the pick.

The butterflies and flowers are just foam pieces that I got from a craft store. I got huge praises on the Barbie birthday cake at the party, and Abigail just absolutely loved it.

I created this Barbie birthday cake with the Wilton wonder mold. I used the half Barbie. Smoothed her dress and then used a paper towel with heart impressions. I smoothed her top and did the lace on top of that. Used the big rose tip for the ruffle on the bottom and tip #104 on top of that. Apple blossoms are the flowers I used.

Barbie cake by Jina B., Singapore

From my daughter’s sixth birthday, I made this garden Barbie birthday cake from 3 boxes of Betty Crocker’s Devil’s Food cake mix and 3 tubs of Betty Crocker’s vanilla frosting. In between the cake, I spread a thin layer of frosting and a layer of blueberry pie filling. Green coloured dry desiccated coconut, white chocolate shavings and four Chuppa-chups wrapped in tulle with purple ribbons complete the garden layout.

The doll on a pick is bought from a cake supplies store. The hair is decorated with purple ribbons shredded and curled on the blade of a scissor. I also used nail art stickers to decorate her face, shoulder, navel and “dress” for the “fairytopia” effect.

The “dress” is made from pink felt and a small piece of gauze is taped onto the body with double-sided tape. I used a 12″x12″ square tray for the base, a stainless steel rounded pan and a Pyrex glass bowl for the dress. I used 3 bamboo sticks to secure the “dress” to the base.

First, I decorated the base. After spreading a thin layer of light green frosting, I sprinkled the colour-desiccated coconut using a stainless steel spatula, tilting the cake to coat the sides. Then I attached the “dress” and secured with the bamboo sticks.

The dress is decorated with purple coloured frosting piped with a star nozzle. I chilled the frosting in the freezer for ten minutes before piping to ensure neat edges. The white chocolate shavings are made using a vegetable peeler. Return the shavings to the refrigerator for 30 minutes to hold the shape of the curls.

Sprinkle the chocolate shavings down the front of the cake for the petticoat effect. I only stick the doll onto the cake at the party venue for ease of transportation. It was a hit, the boys and girls all wanted to know if it was a real doll with real hair.

Most had second helpings so that they could “try the dress too!” The birthday girl got a lollipop and the other three were given out as prizes.

To make the cake, I used a dome shaped bowl to bake this Barbie birthday cake. I bought a Barbie doll pick (found at any craft store or even Walmart!) and frosted it.

I bought fondant for the first time to make the top torso part of Barbie’s dress and even make a hair ornament. It was so much fun- it felt like using Playdoh! Then decorate any way you choose. The flowers on the bottom are also made from fondant. I used flower cookie cutters I had. This Barbie birthday cake is very easy to do!

Take a look at more of the coolest Barbie birthday cakes…