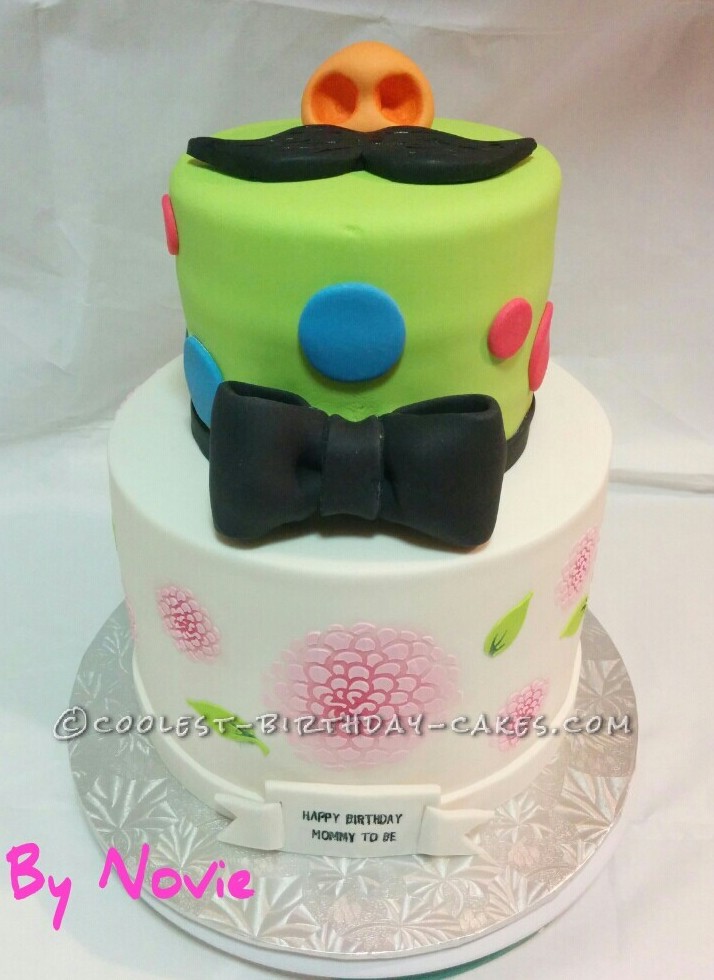 For this baby shower mustache cake, the mommy-to-be’s friends asked me to make the baby shower cake with a mustache theme. Coincidentally, the day of the shower was also, the mom-to-be’s birthday, so that gave me the idea to make a 2 tiered cake with different designs.

For the bottom cake I used a 10″ cake pan. I baked mocha cake, sliced and frosted it with mocha buttercream between the layers to 6″ high. I covered it with the same frosting and then with fondant. I let it dry before I added the stencilling.

I did the same with the top tier, but the cake pan was 6″. I made that layer, including frosting 4″-5″high.

To make the mustache, I rolled fondant a little bit thicker, formed it freehand, and let it dry.

For the bow I cut a long strip of rolled fondant to 15 cm, cut it in half and stuck it together, forming it to the look the way I wanted it to be and making 2 loops. I put sponge in between the 2 loops and than cut a little strip to cover the middle of the loops. After that was complete, I let it dry.

To make the nose, I formed the fondant into a triangle freehand to the size I needed it to be. I made the nose holes with a ball tool and let it dry. Then, I colored the nose with petal dust to give the nose holes highlights.

Everyone was very happy when they saw the cake, and especially the mommy-to-be since this was partly a surprise party for her birthday on top of the already planned baby shower.