Check out this incredible collection of airplane cakes for an awesome birthday cake idea! Discover the decorating tips to create your best homemade cake. 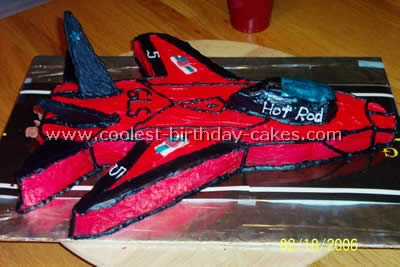 I had this cake idea using a standard 9×12 cake pan and then cutting it into two pieces – a 5×12 and a 4×12. The 5×12 becomes the main jet trimming, the front of the cake into a nose shape and using the trimmed pieces to form the cockpit (I used a piece of blue fruit rollup for the windshield.

Then cut the 4×12 into 4×8 and 4×4 pieces. Cut each of these pieces diagonally for the small and large wings. I frosted graham cracker pieces for the fins that stick up. Piped black outlines for the details. I added red gum drops to the back to look like the jets and printed a runway on my computer and used this to add to the cake plate. 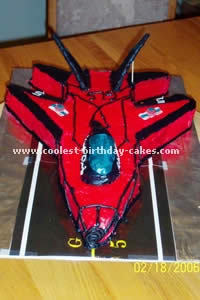 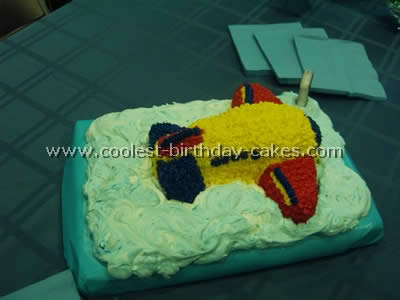 I used the airplane cake pan for my cake idea and then made the clouds from cool whip frosting with some blue food coloring mixed in. 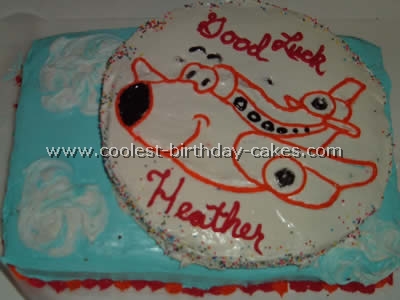 I made this cake idea for a pilot leaving the company (a going away party). I began with a square cake pan for the sky. Then I used blue food coloring in fluffy white frosting and then swirled plain fluffy white frosting for clouds. Next I placed a round cake pan for the plane. I used a picture of the plane from a coloring book (in which I use often for decorating ideas). I frosted the cake white and used a toothpick to draw the plane then used tube frosting to go over my outline. Finally, I filled in the plane as it looked in the cartoon drawing. 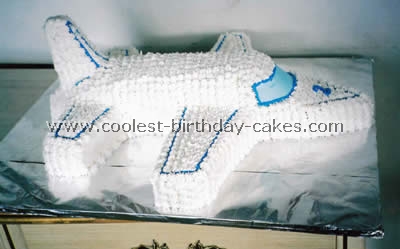 Directions are on Shindigz. It’s an easy cake idea to create. It’s just a rectangular cake cut up and placed on a board. I did use a rice krispie treat for the upright tail section. It worked really well. 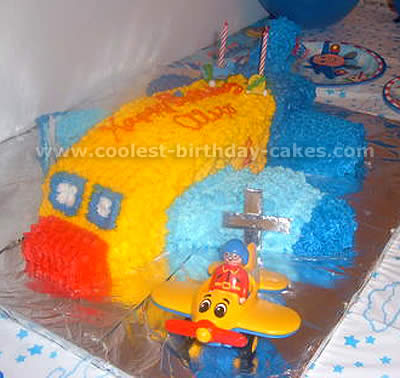 I got this cake idea form a wonderful website called

I made this cake for Alejandro’s second birthday; he loved planes! I made some changes on my cake, but it turned out great. 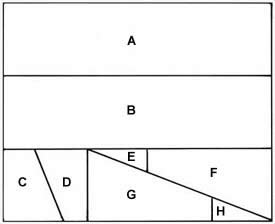 I used tip 21 (star tip) to cover the cake. Prepare the mixes according to the manufacturer’s directions. Pour both mixes into a well-greased pan. Bake the cake according to directions on the package, but add an additional 5-10 minutes to the suggested time to bake.

Trim the cake where the dotted lines indicate. At the front of the airplane, where the cockpit is located, cut the top layer of the cake at a sloped angle to meet pieces “E” & “H”. Frost the entire cake. After frosting the entire cake, frost. If you have any questions I will be glad to help. Enjoy! 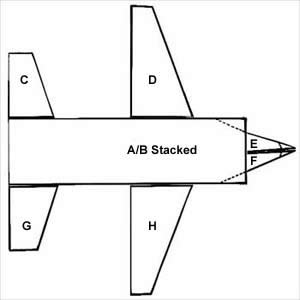 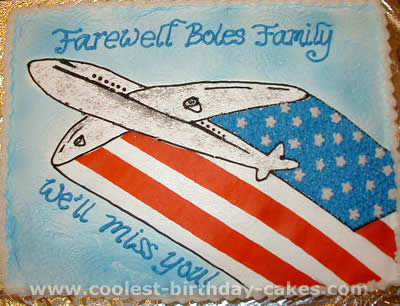 For this Farewell cake idea, first frost the cake white. Spray with blue mist for background (covering the plane and flag area so that it stays white). Outline plane with black frosting using no. 3 tip. Sprinkle in some silver glitter and/or sanding sugar on plane. Add red fruit roll-up stripes. Pipe in blue part of flag with star tip, and then overlay white stars. 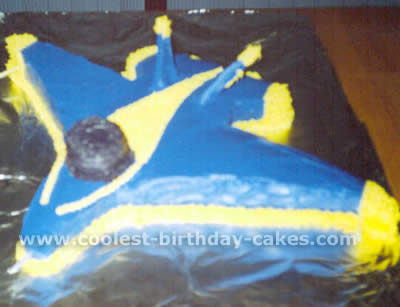 I made this cake for my son’s third birthday. He’s a HUGE Blue Angel fan.

I made it from 2 sheet cakes – cutting out the body from one and the wings from the second (diagonally). The cockpit was made from a snack cake (I wouldn’t recommend that cake idea, since it sat a little high on the cake).

The wings on top were made from icing graham crackers, diagonally cut in half. (NOTE: Do not ice graham crackers until ready to serve since the frosting will soften the crackers and they will wilt or break).

I stuck a candle in front of each wing tip and one on plane’s nose. The back of cake had exhaust pipes with two orange gumdrops as the flame exhaust. It was a huge hit. 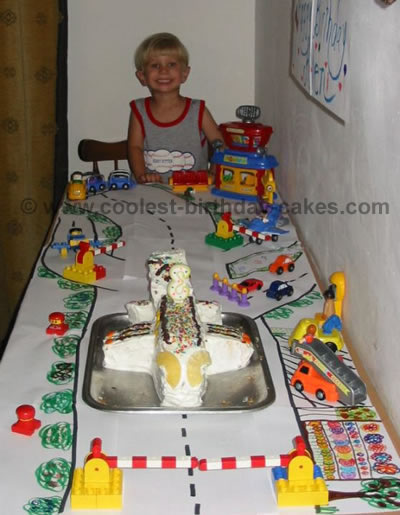 A cake to play with! The whole scenery of the airport activity turned the birthday cake ceremony into an exciting board game for all the little ones who gathered around the table. It was a little bit hard for them, though, having to take apart the flying machine in order to try it out.

Nevertheless, Alen (3) had a great time being one of the ones giving away the parts of the airplane. 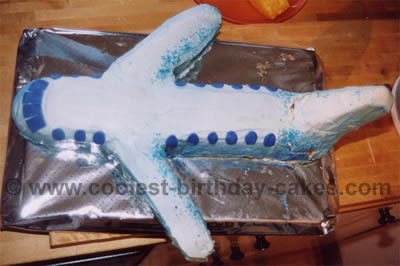 Here are Lia’s preparation tips for her airplane cake idea: My daughter insisted that she needed a blue airplane cake for her fourth birthday. (We live near three airports, maybe that’s why…) So I did my best….

Here’s how I did it: I baked 4 cakes in loaf pans so that I could make the long narrow body. I think you could make it using one big lasagna pan or something but I was afraid of it breaking while I was carving, so I used the loaf pans and I made pound cake so it would hold together under pressure.

I split the loafs in half lengthwise to fill with chocolate buttercream and then pieced two (whole) cakes horizontally on a board to make the fuselage.

Then I split another cake diagonally to create the two wings (turning one over to create its mirror image) I used the remaining cake to carve the tail section, which I mounted on the rear using toothpicks to hold in place. 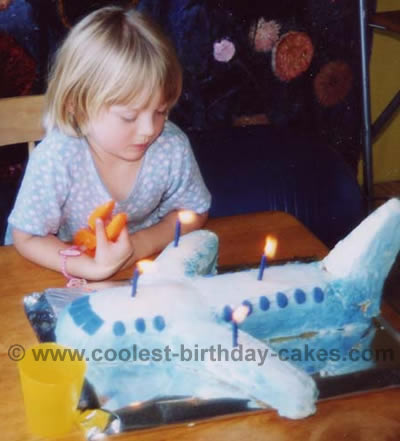 Once the basics for this cake idea were in place I used a sharp knife to carve the nose and fuselage. I iced the whole airplane in pale blue Swiss meringue buttercream, using a warmed knife to smooth the surface. I molded the windows from blue fondant. Then I sprayed the whole cake with spray food coloring to give the sides a deeper blue. I added some sugar glitter.

I got balsa wood airplane cutouts for 25 cents from the craft store and glued magnets on the backs and the kids used acrylic paint pens and glitter glue to decorate their own airplane fridge magnets. 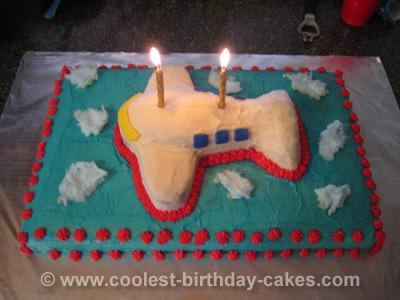 Read Caroline’s “Party-Tale”: The story behind the cake…

(Editor’s Note: This is a multi-vehicle cake, however the idea of setting a toy airplane on whipcream as if it were a cloud is so cool, that we decided to put the cake here…)

This was such a fun cake to make for my son Caleb’s second birthday. It was a joint party with his best friend Miles. The theme was Planes, Trains, and Automobiles. The only regret was not being able to find a little toy train in time!

To start, I made two separate 9×13 yellow cakes, from a box mix. In between these two layers, I spread a thick layer of real whipping cream, lightly sweetened, (much better than Cool Whip) that I had dyed blue. Then I made two batches of decorator’s icing (the recipe was on the bag of confectioner’s sugar, but I added about another half cup of sugar to make it stiffer).

With white icing I covered the entire cake as a base. Then I drew with a toothpick the basic layout of the design, indicating where the train track, road, and sky would be. I crumbled up a snack size bag of mini Oreos and placed it on the cake for the train track. On top of the cookie crumbs, I drew the tracks with blue decorating gel.

Then, I made some of the icing blue and covered one corner of the cake with star points. I placed the toy airplane on the cake with the front end propped up with a toothpick. This made it look like the airplane was flying! I hid the toothpick with white whipping cream to look like clouds and made more clouds around the airplane.

Next, I made the rest of the icing green for grass and made star points all over the rest of the cake, except for leaving the road white. This took about a whole batch of icing on its own.

With white whipping cream I wrote “Happy Birthday” on the green star points and with yellow decorating gel wrote “Caleb & Miles” on the white road. Beware, though, because whipping cream is very airy and very difficult to write neatly with!

Last of all, I placed the #2 candle in the empty space above the “Happy Birthday.” It looked great. Everyone loved how the cake looked and tasted. It was a big hit. And I was very happy about it, too! 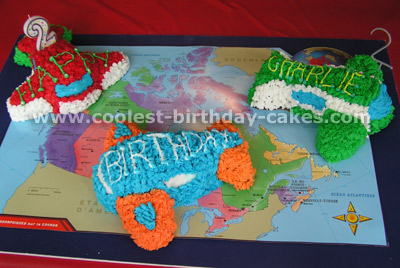 For my son’s 2nd Birthday, we had an airplane theme. I bought the cake pan on the internet and made a cake board with a map of Canada for the airplanes to sit on to give the effect of them flying over the country. This cake idea was a big hit with everyone!