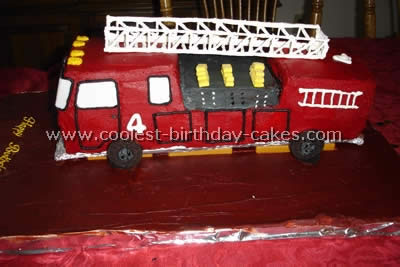 I used two packets of Duncan Hines Red velvet cake mix and baked the kids cakes in a 10×14 cake tin. After freezing the cake cut in half lengthwise then cut one of the halves into three pieces. Slice about half an inch off one of the five inch pieces (back of truck).

Cover a thick cardboard piece 16×5 with foil. Placed the long piece of cake on foil then add a small amount of Butter icing and cover layer. Add small pieces on top with the 4 inch piece in middle and the thinner 5 inch piece will be the back of the truck.

I made Butter icing and used four containers of the red no taste gel. For grey I used a little bit of black. Windows I molded Fondant. I made the Ladders a few days a head so they could dry as they were made out of Royal icing. I covered a chopping board with foil and iced it brown then put some thin wide lego pieces in the middle and placed the cake on top so I could put the wheel on (Oreo’s).

These are the type of kids cakes that are fairly simple to make. I took a 9×13 cake and cut it in half (long ways). One half served as the base of the cake and the second half is cut to make the cab of the fire truck. Black licorice for the ladders, chocolate cookies are the wheels and gum drops are used for the headlights and lights on the truck. String licorice is used for the fire hose.

Thanks to everyone who posts kids cakes on this website. I was able to gather a number of ideas to make my son’s cake work for us.

I made a chocolate 8×12 rectangle cake and then cut it so that it was flat (must be my pan!) and cut the shape out. I didn’t feel up to the challenge of 3-D cakes though they are cool. I iced with a fabulous vanilla buttercream icing recipe I found on Wilton’s website and it was delicious – it tasted professional.

My son just loved the thin red licorice hose and the ladder made with chocolate icing. The best part was using Wilton’s ready-to-use rolled fondant icing. I bought a box that was the 4 primary colors and just cut to the shapes I wanted with the red. Very easy to use easy to cut with a sharp knife and I think the effect is good.

The kids (and adults) loved this cake! I baked one 11×15 double batch chocolate chip cake for the truck:

1) The cake was first cut in half lengthwise.

2) Two inches were cut from the end of each piece from step 1.

3) The two larger pieces from step 2 were stacked to create the main body of the truck.

4) The two smaller pieces from step 2 were then stacked side by side on top at one end to create the cab.

5) All pieces were “glued” together with vanilla icing. To make the cake appear to be riding on the wheels there needed to be an air gap below the truck.

The sticks were positioned so that they would be hidden once the wheels were attached.

6) I then covered the entire cake in red icing. This required an additional trip to the supermarket because it took a TON of red food color before the icing stopped looking pink and started looking red!

7) The white windows were piped in on top of the red and then all of the black, grey and yellow piping was added for detail. I bought the black premixed at the supermarket and just diluted it with more vanilla icing to make the grey.

8) I used licorice for the hoses, M&M candies for controls, Dots for the emergency lights, Mike-and-Ikes for the taillights and Nabisco Famous Chocolate Wafers for tires. The tires were made by “gluing” 3 chocolate wafers together with black icing; this made it look like the tires really had treads.

My wife purchased the fire hat, fireman boots and Dalmatian candles for finishing touch decorations. Overall time spent was 7 hours split over 2 nights. What a lot of fun!

For my son’s second birthday I made a fire engine cake using several kids cakes ideas from this site as well as others.

I started by baking a 9×13 in yellow sheet cake which I froze for a few hours to make cutting the various pieces a little easier. I then cut and stacked the cake as shown in the diagrams balancing the large base piece on stacked graham crackers to lift the truck enough to place tires.

The truck front and back was frosted with red tinted buttercream and the center with white. White icing was piped around the windows and bottom for accent.

The tires are Oreos with a fruit-loop center, the ladders are black licorice, headlights are chic-lic gum, lights are gumdrops, hose is green fruit chews molded into long rope and wound around a pretzel stick, and windows are grape gumdrops which are pulled and molded flat.

Over all I was quite happy with the results considering this was my first attempt at any 3D cake. We completed the fireman theme by getting free plastic fire hats and safety stickers from the local firehouse.

This is one of those kids cakes that’s easy to prepare!

Using large loaf tins I baked two chocolate cakes. For this cake I used a Hershey’s chocolate cake recipe from their site. I placed the two loaf cakes end to end to form the body of the truck (cut off a couple of inches).

For the front of the truck I bought a prepared Sara Lee frozen cake and placed it long side up and sculpted it as needed. An important tip for the success of this cake is to elevate the loaf cakes so that the tires look okay. I used stacks of graham crackers glued together with extra icing as can be seen in the cake pictures.

The tires are just Oreos cookies and the hoses in the back are separated Oreos with licorice ropes glued in with icing. I got this idea from a magazine but wanted to improve the look so I purchased the plastic fireman for the back of the truck and used the licorice rope for hoses.

Any assortment of square and round candy will be suitable for the knobs on the side of the cake. The ladders are made of pretzel sticks glued together with melted chocolate.

The fun thing about this sort of kids cakes is that there are so many different “extras” to eat!

I made this cake mostly because my son is CRAZY for fire trucks. I searched around through lots of kids cakes and finally came up with this idea.

I made a yummy 9×13 chocolate cake base to serve guests in case my son decided he didn’t want to eat his truck.

The truck was made with a loaf tin. I made a marble cake so that it will be colorful when cut and also because it’s easier to shape.

I coated it with butter icing and then painted it in red.

The ladder and wheels were made with marzipan (thus there was much arguments among the older kids as to who should have them) and decorated with M&Ms and licorice. I also made flames with the marzipan and placed his 2 candles among them. So there was a real fire.

For my son’s second birthday I did a fire truck cake.

I baked it with a regular loaf pan for the main part of the truck. A mini loaf pan for the top. The tires were the bottom of cupcakes, painted with black frosting. Candy was used for the different parts of the fire truck.

The “fire” was made out of various orange, yellow and red candies that I melted together in the toaster oven. Once cooled, I cracked it into pieces and shoved each piece into the cupcakes to make it look like fire.

It came out to be one of the coolest kids cakes.

Jesse, my #3 grandson, wanted a firetruck for his second birthday. I did a lot of research for kids cakes, but didn’t find many I liked, so I just made it up as I went.

I baked an 11X15 butter cake and cut off about 2 inches off the side of the cake then cut the cake in half, lengthwise. I also cut the 2 inch pieces in half. I stacked the two longer pieces together with red frosting then put the two 2 inch ones side by side on top at one end. This needs a couple of dowel rods to help hold it in place.

I frosted the cake all over with red buttercream frosting then did the detail work with white, golden yellow and gray frosting with some black for outlining. I used Oreo cookies for the tires, otherwise the entire cake was done in frosting. I just put white icing on the bottom for a border and to make it appear to be somewhat above the board.

My son (5 years old) wanted a Rescue Hero birthday party so we started off with a firetruck cake. I got several kids cakes ideas from this website as well as others and sort of used a little bit of each of them.

I then took two of those {1 vanilla & 1 chocolate} and cut those in half making four 7.5″ x 5″ pieces. I then cut two of those in half again. I stacked them using vanilla buttercream icing to hold them together and stacked two layers of graham crackers underneath to add a little height.

I alternated the chocolate and vanilla layers so it looked striped when cut.

I used three batches of buttercream icing to frost the cake (1 1/2 white for in between layers and accents, 1/2 grey for accents, and 1 red for the exterior body and to add decorative accents). The yellow I used was a store bought tube that came with tips.

We purchased a Rescue Hero Cake Topper kit off eBay which included a Rescue Hero firefighter, Dalmatian pick, Rescue Hero pick (we took it apart to use it on the front and back of the truck), and also a flashing red light that we put on the top of the cab as a siren. We added licorice (for hoses), M&M candies for controls as well as ladders drawn in with icing and Oreos for tires.

It took a little longer to decorate than I had anticipated; however, this was my first attempt at decorating any type of kids cakes. My children, as well as the guests, were very impressed.

I purchased a Kit from EBay to help me with the dimensions and design. The cake itself was made from a 12×18 slab cake cut into sections to form the truck. For these kinds of kids cakes it is good to take a few weeks in advance during which I made Royal icing decorations and color flow decorations using pre-made templates for the windows, crest, extension, ladder, knobs, hoses, etc.

The cake was iced with Buttercream icing using #21 star tip. The wheels were chocolate donuts placed on the sides with toothpicks to hold them on and then iced black.

The pedestal base was made from 1/2 inch foam core board cut to the dimensions listed in the package and then glued with hot glue and covered in Aluminum Foil.

It makes it appear like it is riding on the wheels.

It really was the Hit of the party!!

The cake and all preparations took about 10 hours in total but were worth it to see the look on my little guy’s face!!

These kids cakes are priceless, they are great for a very memorable birthday!