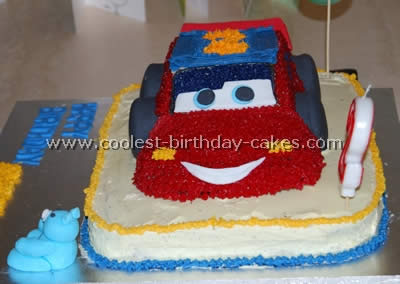 I made this cake for my son’s second birthday. I made the ‘accessories’ like the spoiler eyes and tires two days ahead of making the cake. I wanted the cake to look a little more colorful than the usual Lightning McQueen Car birthday cakes. So I colored the windows blue and gave it a blue roof as well. For the tires I joined two mint-slice biscuits and then covered it with fondant.

Cake by Jennifer B., Schererville, IN

My son loved the Cars movie so I made this cake for his third birthday. This is a Wiltons Lightning McQueen cake pan which is very usefull for making Car birthday cakes. I used decorating tips #3 for outline, # 16 for majority of vehicle and #21 for windows. I frosted the car in white first and then spray-painted it red (for better taste). Then I outlined in black. A friend told me to mix black color with chocolate frosting instead of white for better taste. Do white parts of the cake last to preserve color.

This is only the second character cake I made. It was for a co-worker’s grandson’s third birthday and he only wanted Car birthday cakes. I used the Wilton Lightning McQueen pan and the Wiltons colors to tint the icing. I outlined the details in black and white with Wilton tip#2 and then starred (tip #16) in the appropriate colors. It was a slow and time consuming process but well worth it.

When I put it in the box to take it to my friend I decided to throw in a few cupcakes too just to be fun. It was a hit!

So I used the instructions for decorating from the Wilton website but made my own cake. I made two large square car birthday cakes then cut them to shape and decorated using butter icing (colored using Wilton paste).

My son’s favorite movie is Cars, so for his birthday, I just had to make him a Cars cake. I knew I wanted it to be 3-D, and there was no pan I found to do that, so got ideas from Car birthday cakes on this site and then I did it all myself. I made two regular rectangle cakes (using two cake mixes, nothing fancy). I made banana custard filling for between the layers. Frosting would have worked just fine, but I thought it might be a little too sweet with as much frosting as I knew I’d be using on the outside!

After layering the cake I used a Lightning McQueen toy car as my model and carved out the shape. I then frosted the entire cake with a layer of store bought frosting, just to seal in the crumbs caused by carving the cake. Refrigerate for at least a few hours to let the frosting set, then I went in and drew in lines in black frosting (with the smallest round tip possible) to make it be almost like a coloring book.

After that I filled in with the colored frosting where appropriate. I changed the number on the top of the car to match my son’s age, and the Lightning McQueen on the back was changed to my son’s name.

Good luck with your own Car birthday cakes!

This cake was made for a friend’s little boy. I used two rectangular cakes on top of each other. I then cut out the cake to the shape of lightning McQueen and cut a spoiler out of hard plastic for the spoiler. I covered the cake in sugar paste and made the eyes lightning flash lights etc out of sugar paste. I had trouble with the red colour so ended up painting the red food coloring onto the cake.

I painted the eyes onto the windscreen with food coloring and made the wheels out of sugar paste and painted black. I traced out the rust-eze sign out of a coloring book and painted it onto some sugar paste. It was a very challenging cake as I have never made Car birthday cakes before.

The Lightning McQueen cake was done with the Wilton cake pan. The other cake is a 1/4 sheet. Both cakes are two layers. I sprayed the sheet cake green, used crushed graham crackers for the road and the grass tip for the grass and the grass border.

The flags were bought at a party store and the cars were my son’s toys. Both of these cakes are peanut dairy and egg free. I used mixes from Cherrybrook kitchen. If I make this cake again I’ll make the icing green for the sheet cake instead of spraying it.

Thanks for all the great Car birthday cakes on this site.

This is Lightening McQueen in Radiator Springs! I made him for my friend’s one-year-old Logen. I had never made Car birthday cakes before so this was quite a challenge! The base cake is made of two 9 x 13″ sheet cakes placed side-by-side. I wanted a longer (wider) narrower base cake to accommodate Lightening McQueen who himself is almost 13″ long. The sheet cakes are two white cake mixes.

The desert-looking frosting is milk chocolate buttercream. The checkered flag was a hand-drawn design done in white buttercream then the black checks were piped in (tip #4.) “Lightening McQueen” was from a Wilton “Cars” cake mold. It is made of one devil’s food cake mix. I iced his sides smooth with “Cars” Red colored buttercream and then placed him on the iced base cakes (that way the flag could stay as ‘clean’ as possible.) Then McQueen was iced according to the design and pattern using Wilton Cars food colored BC frosting.

It took me a while to decide what the background cake would be and the checkered flag along with a desert setting seemed to be perfect (if you’re familiar with the movie)! “Mater” is a piece of “Cars” party favor confetti just standing in the frosting. I spread the other confetti onto the cake board after we got to the party. This was easily my tastiest cake to date and my favorite design.

I made this for my son’s sixth birthday this year. I used an 11×15 pan, froze the cake and cut trimmed and stacked it so that it was 11×6 and 4 inches in height. I covered the cake in homemade marshmallow fondant and added decorations. The wheels are made from rice crispy treats that I also covered in fondant.

Thanks to Car birthday cakes on this site, it gave me inspiration to make this cake!

After viewing the Car birthday cakes on this site for inspiration, I baked one cake mix in a one pound and a 1.5 pound loaf pan. I cut the top of the car and the “spoiler” from the smaller loaf, carved them then placed on top of the larger loaf with frosting.

For the frosting I used a plain white base and then red frosting spray to get the dark red color with wax paper cut outs to keep the windows and hood logo white.

Since I wasn’t going for an exact replica of Lightning McQueen I just did the basic lightning bolts on the sides.

I used yellow and blue candies for the lights and eyes and a small black tube of gel frosting for the lines (it was old or the lines might have been smoother). I changed the words on the car to my son’s name and age. Since it didn’t seem like enough cake to serve our party I placed it on top of a 9×13 cake which I tried to make look like a road.

I made this cake for my little boy’s 2nd birthday and it was my first ever attempt at cake decorating. I made a basic Victoria sandwich mix in two Swiss roll tins and then sandwiched them together using jam and butter icing. I then carved them into the shape using the car cake shown on this site for Car birthday cakes.

The hardest part was coloring the ready roll icing red. It seemed to take ages. Once I had draped the icing over the cake it started to take shape and using a pastry brush I then painted the icing with some additional red food coloring to get the correct shade.

I cut out the wheels from white icing using an egg cup and decorated it with ready made colored icing which I used for other details.

My son loves Disney’s Cars so it was a no-brainer to have a Cars-themed party for his 4th birthday! Of the many car birthday cakes on this site, I chose this cake which was easy to make and received a lot of compliments.

First I made a 13×9 cake and frosted it white. Then I bought a frozen pound cake and cut off a piece of the top to make it look like a car. I frosted it red (white frosting with red food coloring) then added the 95 in black decorator gel along with the windshield. I piped the white windshield and eyes (white then blue then black pupil). I added yellow M&Ms for the headlights (although Lightning does not have headlights) and Oreos for the wheels. I used bamboo kebab skewers on the four corners of the 13×9 cake and put mini chocolate donuts on them for “Luigi’s Tires.” Easy and adorable!