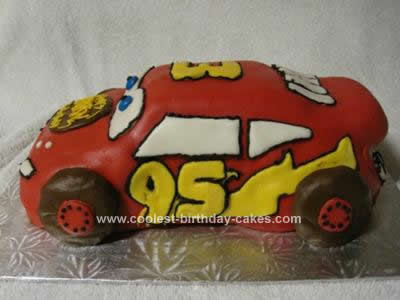 My son really loves the movie Cars, especially Lightning McQueen. I had been asking him what kind of cake he wanted for his birthday and he asked for a Homemade Lightning McQueen Birthday Cake. I didn’t know where to begin. I decided to start doing research on the internet and I came across this site. It gave me many great ideas in order to get started. I knew that I wanted to really make a statement and try something I hadn’t done before and decided to try fondant icing. I like the finish that it gives to a cake.

Since I had to make two cakes for two parties, I decided to start with a Wilton 3D Cruiser cake pan and made a few adjustments. I added a spoiler with some of the extra cake and carved the shape to look a little sleeker like Lightning McQueen. I made 2 batches of marshmallow fondant (Wilton has a good recipe on their website) and covered the cakes with it. I tinted the fondant pink before I added almost a whole bottle of Wilton no taste red food colouring. The wheels are shortbread cookies covered in brown fondant. The eyes are blue m&m’s and Wilton’s black icing. I piped the black icing all around the tail lights, headlights, windows, lightning bolts and number “95” to really make it pop.

All decorations for the cake were made from rolled marshmallow fondant. I put the number “3” on the roof of Lightning McQueen for his age instead of his usual “95” to personalize it a bit more. Instead of “Rust-eze”, I piped “Happy Birthday” and his name. I ended up having a lot of fun making his cake and he absolutely loved it. 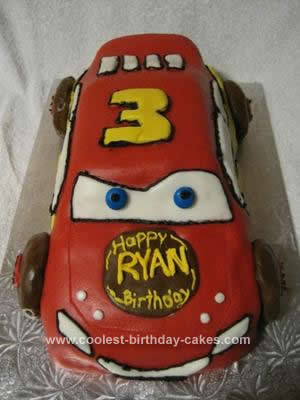 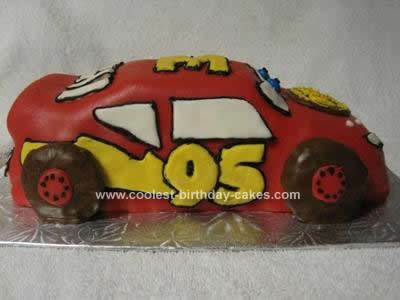